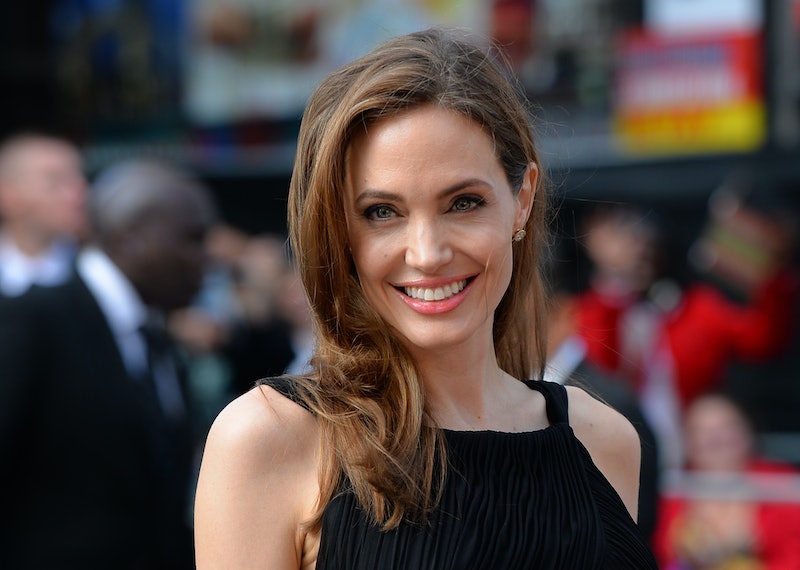 Angelina Jolie is known to rock one color and turn it into a fashion statement. The Oscar-winning filmmaker, mother, and humanitarian has consistently owned the red carpet with her confident sense of style, from her all-black goth moment in 2000, to the sophisticated silver Elie Saab gown from this year's Academy Awards. But as these never before seen early modeling photos of Angelina Jolie show, the fashion chameleon can simply do no wrong, even if she's wearing head-to-toe beige.

Jolie dropped out of the Lee Strasberg Theater Institute in the early '90s to pursue a career as a model. Several photographs from her early days in front of the camera have come out over the years, including ones from when she was just 16 and starting out. The 1993 shoot, published by Daily Mail, shows the future A-list star modeling clothes from British brands Debenhams and Miss Selfridge for Look, a little-known magazine published in the U.K.

The pictorial — titled "Honeychild" — showcases early '90s fashions that have since come back in style. In one shot, Jolie is photographed kneeling on a beach with her hands up to the sky, wearing a sporty white top and shorts, knitted vest, and Birkenstocks. In another photo, one that could easily be mistaken for a Coachella-themed shoot today, the actress is crouched down on a desert floor with a beige top and matching trousers. Her look is quite minimal except for a black band wrapped around her forehead. There's plenty more beige in the monochromatic shoot, yet Jolie is able to shine through with her edgy yet cool personality in every shot.

More like this
Harry Styles’ Red Carpet Looks Have One Thing In Common
By El Hunt
Anne Hathaway Revived 'The Devil Wears Prada' In The Most Andy Sachs Way
By El Hunt
These Are Kylie Jenner's Best Paris Fashion Week Looks... So Far
By Dominique Norman
Hailey Bieber Channeled Jackie Kennedy At Paris Fashion Week
By Allie Fasanella
Get Even More From Bustle — Sign Up For The Newsletter