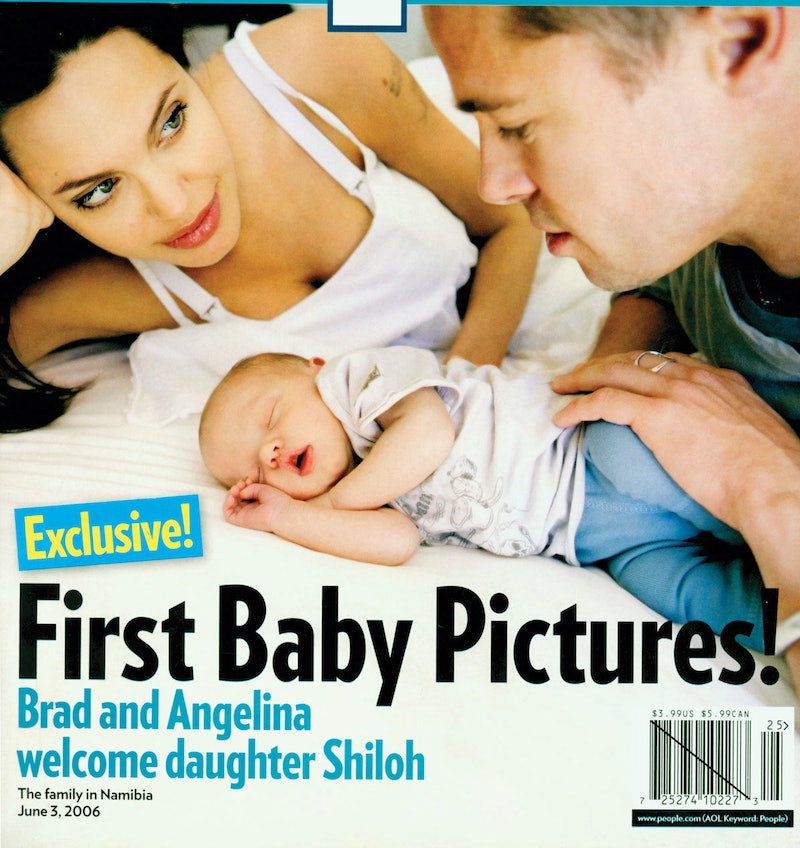 Following her op-ed Tuesday in the New York Times, Angelina Jolie's decision to remove her ovaries and go into early menopause is all over the news. But when it comes to the discussion Jolie is sparking not just about cancer but also about the realities of fertility, it can be harder to know what's truth and what's an old wive's tale. Fertility collects myths like '90s kids collected Tamagotchis: there must be thousands, all over the world, from the innocent ("eating honey will help you have a boy!") to the more insidious and harmful ("if you're not conceiving, it's just because you're not relaxed").

It's important that you identify which fertility myths are nonsense, even if you have no intention of having a baby any time soon — because fertility silliness isn't just problematic for women who are trying for a baby. It's also, particularly in the case of no-fertility-after-35 scaremongering, annoying for women who are focussing on their careers and thinking about babies later. Imagine a world where nobody yells at you about your failing eggs — wouldn't that be nice? They will also help dudes who think fertility doesn't affect them (rubbish), and ladies who would very much like not to be pregnant (like the old wives' tale that you can't get knocked up while you're on your period. Nope).

So keep a note of these seven debunked myths for yourself, for mates, and for anybody who mentions them casually at a bar one day. Because we all deserve to live in a world where people actually understand how babies happen.

Myth #1: "Over 35, The Chances Of Conceiving Are Basically Nil"

This one's particularly useful to know if you're putting off babies for a while and want to stop your relatives wringing their hands at you. Our data on female fertility indicates that while it does go down over time, the usually-quoted statistic — that 1 in 3 women between 35 and 39 won't be pregnant after a year of trying — is outdated. BY OVER 300 YEARS.

The Truth: That much-quoted statistic is from a French census between 1670-1830. (Can we just pause and yell about how insane that is for a second?) The actual statistics? Eight-two percent of the 35-to-39 age group do actually conceive within a year. That's a radical difference. Post-40, your fertility does lessen, but now doctors are experiencing the opposite problem: a rise in abortions among over-40 women who believed they were no longer fertile and unexpectedly got pregnant.

Overall, the story is far more positive than we were ever led to believe. So next time anybody waves a biological clock in your or a friend's face, get them to check their facts.

Myth #2: "You Can't Get Pregnant On Your Period"

This is a fairly common misconception that should really have been ruled out during high school sex ed. Many people think that, due to the shedding of the uterus lining, it's impossible for women to get pregnant when they're on their period — but the facts don't match up.

The Truth: It's unlikely, but it does happen. Why? One, because some of the bleeding during your period may not actually be menstrual — it may be related to your ovulation instead. Two, because ovulation can overlap with menstruation if you've got a really short cycle. So pregnancy during periods isn't impossible at all. Keep that in mind.

Myth #3: "All Women Ovulate At The Exact Same Time In Their Cycle"

There's such thing as a "textbook" fertility cycle in women, and it's one that we tend to pick up as the universal: 28 days long, a period, then ovulation happens on day 14. However, it's pretty important to note that this is in no way the same for every person — and our ovulation dates differ because of it.

The Truth: Generally speaking, we ovulate about 10-16 days before our next period, but cycles in women differ in length — from 24 to 34 days. So there's no way to pinpoint your ovulation period unless you're using an ovulation test.

Myth #4: "As Long As He Can Ejaculate, Male Fertility Doesn't Expire"

With all the emphasis on women drying up and wasting our eggs by the thousand, you'd think men could give out all the babies forever. Not true.

The Truth: Age in men causes a decline in testosterone, which means that while he can still get fertile women pregnant into his 70s, it's less and less likely — after the age of around 35, his sperm will be fewer, slower, and less viable.

Myth #5: "It Takes Longer To Get Pregnant After You Go Off The Pill"

This is a piece of information to soothe anxious friends who are trying to get themselves a bun in the oven. A lot of women appear to believe that spending a long period of time on hormonal birth control like the Pill means that getting pregnant will take ages. The reality? Nonsense.

The Truth: Going off the Pill is designed to be easy and let your body return to its natural cycle within weeks — so most scientists estimate that normal ovulation will pop up naturally within a month. Hormones don't "linger" or "damage your chances;" the statistics just don't back it up.

Myth #6: "Lying With Your Legs In The Air After Sex Helps Get You Pregnant"

I mean, I get the logic of this one — and it's just one of a host of different myths about the best things to do after sex to help a sperm find its way to an egg, from avoiding showering to lying on your side.

The Truth: The fact is, sperm very rarely need your help to do anything. They're persistent little critters. So just as jumping up and down or having sex standing up won't dissuade them from getting to your eggs, lying with your legs akimbo won't do much to encourage them either. However, medical advice does recommend two things: lie cuddling after the act for about 10 to 15 minutes, and don't go to the bathroom during that time either, just to make sure.

Myth #7: "There Are Foods You Shouldn't Eat If You're Trying To Get Conceive"

There are all manner of things you're told you should or shouldn't eat and drink if you're trying to get preggers. Avoid soy, eat lots of yams if you want twins, the list goes on.

The Truth: The real story? There are definitely some foods that can help you conceive, but they've all claimed the title because of innate nutrient qualities that keep you healthy and regulate your hormone levels. Fish, with its high omega-3 levels, is considered a good pregnancy food, as are bananas, which have vitamin B6, an excellent hormone controller.

The serious culprits you do need to cut out? Alcohol and caffeine. Fertility studies, unfortunately, show that women who want babies need to lower their intake of both (and stop smoking, obviously). And they won't have to suffer alone: alcohol also lowers testosterone levels, so men should abstain too. Though, annoyingly, it looks like a little caffeine actually helps sperm, so they do get to remain bright-eyed and bushy-tailed.

More like this
The 19 Best Tweets & Memes About Bisexual Awareness Week
By Lexi Inks
These 4 Signs Are The Seductive Sirens Of The Zodiac
By Brittany Beringer
Black Women's Equal Pay Day Highlights An Upsetting Problem
By Brandi Neal
Are Quality Time & Gift-Receiving Love Languages Compatible?
By Lexi Inks
Get Even More From Bustle — Sign Up For The Newsletter