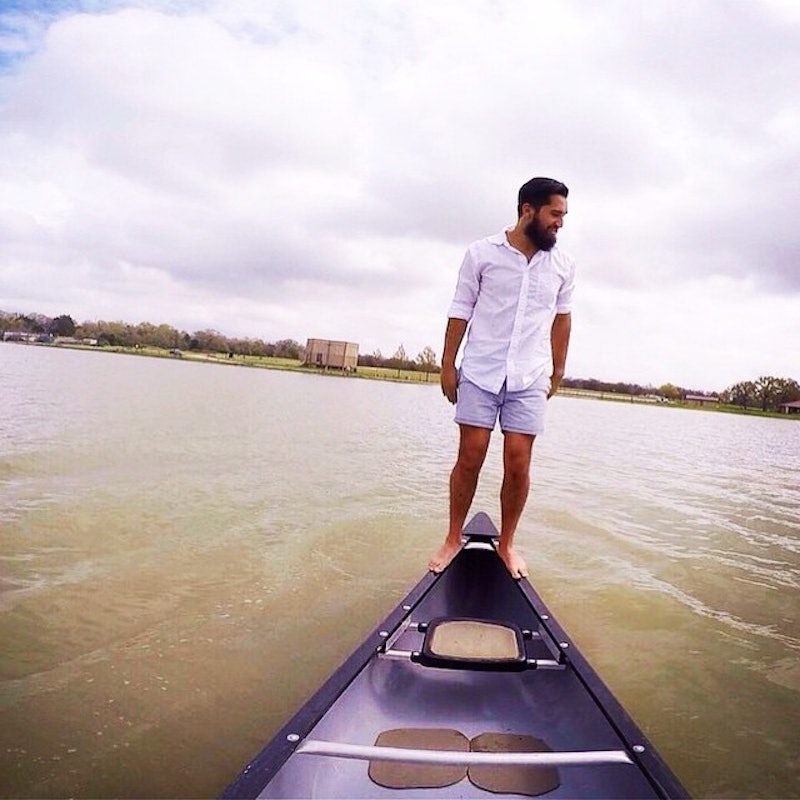 I didn't even know I thought beards are more attractive until my boyfriend shaved his facial hair for Halloween. He looked so different, I felt I was cheating on him with his clean-shaven twin. And I dated that twin for over a month while we waited for his beard to grow back. (And you know, that waiting is the worst part — dealing with the itchy, in-between beard phase.) But we should commend our boyfriends' patience — Men’s Journal says there’s a lot to maintaining a beard: “Trimming, shaping, fading, cleaning, combing, and conditioning is all part of the game and changes depending on what style you want and type of facial hair you were born with."

Thinking back to men before that boyfriend, I realized more were bearded than not. Maybe it was in my psyche from when I was growing up, surrounded by uncles who had beards in Chicago — perhaps as a result of the near-arctic winters and their effort to keep warm? Or maybe it was an influence of where I live now, in L.A., and the prevalence of hipsters and bearded men there — particularly in trendy neighborhoods like Silverlake and Venice — versus other parts of the country? Or perhaps the surge of bearded celebrities seeped into my head, like George Clooney, Ben Affleck, and Zach Galifianakis?

Celebrity or not, beards can change a man’s look nearly overnight (well, quite a few overnights to get the desired result, depending on what you want that to be).

No matter what type of beard your boyfriend may have, we can all agree that beards (seemingly) change the man. You can even check out this dating site, Bristlr, that caters to men with beards and the people who love them. My reasons for loving bearded boyfriends include:

Maybe this goes back to what I said about being raised among a lot of bearded men, like a Freudian thing. I think we women who like men with beards are not anti-clean-shaven men, we just prefer bearded ones, like these on Instagram. When you look at the men sans a beard versus with a beard, the latter makes them look more mature and someone who’d win an onscreen fight against their non-bearded nemesis. Beards make men look years older, in a very appealing way.

2. Beards Are For A Good Cause.

Aside from beards looking good, they’re also for a great cause. Movember took our men’s beards away while men focused on growing moustaches (and sometimes beards), but No-Shave November brought them back. Movember raises money for prostate or testicular cancer while No-Shave November raises money for cancer, as well, and partnered with the American Cancer Society in 2013. They figure that if men grow out their beards for the month of November instead of spending money going to the barber, they can donate that money toward cancer research instead.

3. Beards Are Seductive (And Soft).

If you don’t believe me, have the guy you’re dating grow one. A friend of mine was practically the spokeswoman for anti-bearded men and happy her boyfriend was clean-shaven. But when he decided to participate in No-Shave November, she dreaded the bearded result, then grew to love it (and he still has the beard today). Just check out these before and after photos of men with beards and decide for yourself which look you prefer.

4. Beards Are Part Of Our History.

According to Live Science, the popularity of beards and facial hair has varied over time, sideburns being most prevalent in 1853, sideburns with mustaches in 1877, and solely beards in 1892. Facial hair is so popular that there’s even an annual World Beard and Moustache Championship (last year’s was in Portland and this year’s is in Austria). Judging criteria includes “...which contestant’s facial hair best enhances his overall appearance, style, and personality. In the freestyle categories the judges will be asked to consider originality and creativity as well.” There are 18 categories within three primary categories, complete with pictures: Moustaches, Partial Beards, and Full Beards. One of the official rules states: “artificial facial hair is not permitted.”

Artificial facial hair? Yep, beards are so hot right now that some people are spending around $3,000-7,000 on beard transplants (depending on how much hair they want filled in) — and you may not even realize it. Dr. Jeffrey Epstein, a facial plastic surgeon in New York, has been doing them for over 12 years. He went from doing a handful ten years ago to a few a week as of last year (in Midtown East and Miami).

"Our findings confirm that beardedness affects judgments of male socio-sexual attributes and suggest that an intermediate level of beardedness is most attractive while full-bearded men may be perceived as better fathers who could protect and invest in offspring."

More like this
10 Ways To Be More Empathetic To Your Partner
By Raven Ishak and Lexi Inks
The 19 Best Tweets & Memes About Bisexual Awareness Week
By Lexi Inks
Why Harry Styles & Olivia Wilde Make A Great Couple, According To Astrology
By Nina Kahn
Are Quality Time & Gift-Receiving Love Languages Compatible?
By Lexi Inks
Get Even More From Bustle — Sign Up For The Newsletter