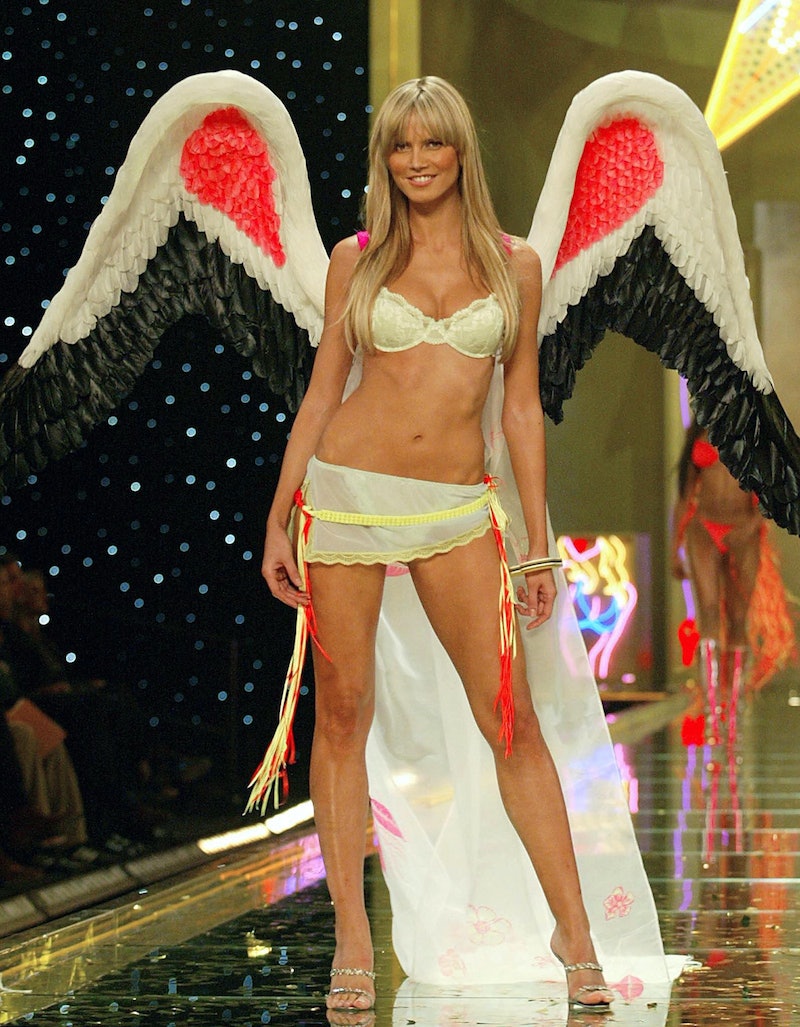 If there's anyone who deserves the title "Underwear Aficionado," it's probably Heidi Klum. Klum has modeled lingerie, sold lingerie, and (I'm guessing) judged lingerie on a little show you may have heard of called Project Runway . And, according to a recent interview with Marie Claire, Klum owns a lot of bras and underwear as well (surprise, surprise). For most people, I guess owning tons of bras and three times as many pairs of underwear to match may seem over the top, but lingerie is simply part of Klum's brand, right? It's practically a necessity.

No, most of us probably can't afford to have 100 bras casually lying around (where would I even keep them all?) to meet all of our very specific lingerie needs, but still — Klum has some good advice for everyone when it comes to shopping for undergarments.

"The key to feeling confident if you’re just wearing your lingerie is simply to find the style of lingerie that you feel confident in," Klum said to Marie Claire. "Experiment with different bras to find a style that you know you look good in."

Basic advice, but solid nonetheless. And you better believe that when Heidi Klum is giving advice about how to feel great in lingerie, I am all ears. Mostly because I, along with a million or so other people, follow Klum on Instagram and if there's ever been an account that's motivated me to buy more bras and underwear, it's hers. She rocks lingerie (often pieces she has designed herself) and looks stunning, confident, and sassy every single time. Here are 11 times Heidi Klum's IG posts made us all want to buy more underwear. Take notes.

NO idea what's going on here, but the photo still makes me want to buy that bra immediately. So. I guess it works.

5. Blast From The Past Photo

And suddenly all I want is to be in the '90s, shopping for bras and scrunchies.

Why can't we all casually hang out with Zac Posen in cute underwear? Why?

BUT CAN WE TALK ABOUT HER HAIR HERE? So. Good.

How can you not be obsessed with this look? Classic glamour.

Who knew a simple white bra could be so very sexy? Heidi Klum knew.

More like this
These Are The Best Socks A Woman Can Buy
By Lisa Fogarty
How To Wear A Bucket Hat Like Rihanna, Dua Lipa, & More
By Allie Fasanella
Serena Williams Looked Like Royalty In A Bodycon Velvet Dress
By Allie Fasanella
Hailey Bieber Is Making Cargo Trousers Work — Here’s How You Can Too
By Catharina Cheung
Get Even More From Bustle — Sign Up For The Newsletter