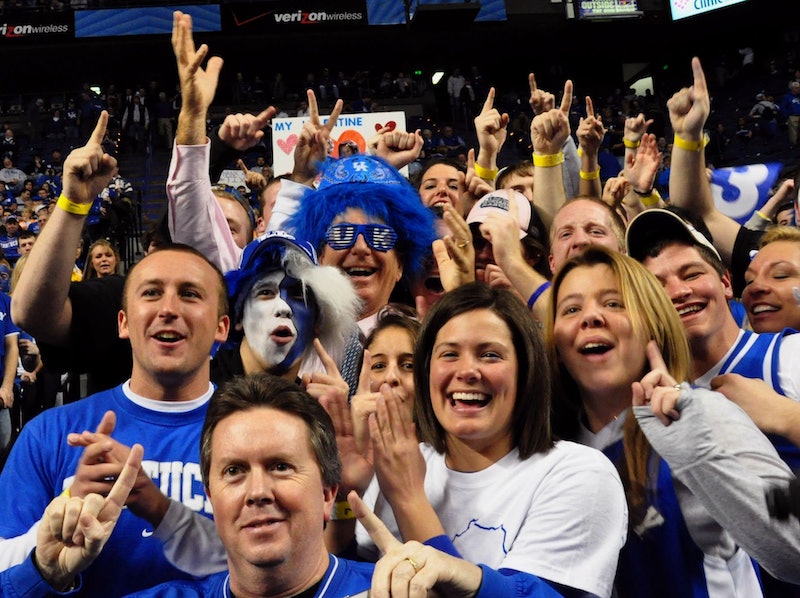 As we enter the next round of March Madness, people across the country are experiencing various levels of exhilaration, anguish, and anxiety. But no one endures these March Madness emotions like a die-hard college basketball fan. While most of us watch the games to monitor our brackets (or, if you're like me, to enjoy some stellar snacks), these folks consider the tournament to be an athletic form of life support — something many lesser fair-weather fans just don't understand.

Seriously, once March rolls around, the range of emotions these men and women experience can be, well, pretty intense. And although the fandom hits hardest during March Madness, for true fiends, the game doesn't stop when the final buzzard sounds. They continue to talk about a game-changing play days (and even months) after it occurs. They analyze a ref's call on their computers as if they work for ESPN. They act irrationally because of their love for the sport, and all the rest of us commoners can do is shake our heads and wonder "WTF."

But if you're going to be around a college basketball fan, the least you can do is try to understand their emotional struggles. From absolute elation to utter vexation, here are all the things only a true fan experiences during a season.

1. The desire to use the term "we" when talking about your team

You may not take to the court or even warm the bench, but you are just as dedicated as any of those guys (or gals) in uniform. You sacrifice sleep and a social life to support the team, which in your mind makes you an honorary member. Not to mention you own a custom jersey with your name on the back, so technically you could step in at any time.

2. The stress of perfecting your March Madness bracket

Unlike your colleagues, you don't fill out a bracket based on team standings. You use stats from last season's March Madness performances, and a slew of formulas to determine who will take home the trophy. Of course, if the math doesn't work in your team's favor, you have to fill out a separate bracket with your boys winning the tournament.

3. Pride when your team beats its biggest rival

You arrange your life around this match-up, and will call out sick just to give the game your full attention. So when the final buzzard sounds and the score is in your team's favor, you can't help but jump for joy, scream at the the top of your lungs, and, for the social media savvy, tweet out a little trash talk.

4. Embarrassment when your team is crushed by a lesser opponent

You walked into this game with high hopes and an abundance of confidence, but that certainty may have been a bit misplaced. As you walk out of the stadium, your head hanging low, you contemplate burning your paraphernalia, but then realize replacing it would be too damn expensive.

5. Anger towards a ref when they make a call against your team

No, you're not imagining things. This guy is throwing up his hands every time your boys get the ball. The only logical explanation is that he hates your team... or is betting against them. Either way, his actions are inexcusable.

6. Offense when someone insults your team

In your mind, saying something nasty about your team is on par with attacking your family. It crosses a line that, apparently, only you and your fellow fans can see.

7. Superstition when your team is on a winning streak

You refuse to change your clothes out of fear that it will lead to a loss. Your friends can complain about the smell as much as they want, but you know that the temporary stench is worth a season of victories.

8. Hatred towards someone who roots for a rival

This person could adopt animals from a shelter, feed the homeless from their own kitchen, and give their entire salary to charity. But none of that matters if they support the enemy.

9. Confusion when an amazing player leaves early for the NBA

Seeing a player move to the big leagues takes you on an emotional roller coaster ride. You’re happy that they have achieved athletic success, but also they are deserting the team that got them this far.

10. Betrayal when a prospective player chooses another school

As the team's unofficial recruiter, you like to keep an eye on any high schooler that may join your league of extraordinary players. So when a student turns your team down for a better offer, you feel as though they've stabbed you in the gut. You sulk for a few days, but eventually take comfort in the fact that someday they'll realize the mistake they made.

11. Despair when your team doesn't make it to the next round of March Madness

After all the work your team put in this season, you are shocked when they are bumped out of the tournament. You try to find comfort in other sports, but soon realize the only way to cope is to hang up your jersey and wait for the next season to begin.

12. Hope for a better future