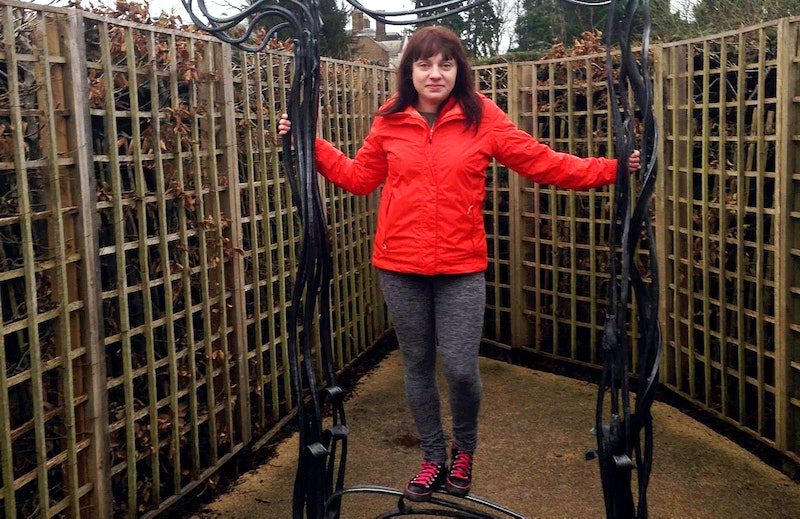 By now, you've heard that Angelina Jolie removed her ovaries and fallopian tubes in order to protect herself from developing cancer. Her announcement, published Tuesday in an op-ed in the New York Times, has helped to raise awareness about the choices a woman can take to manage the terms of her own health. But cancer prevention is just one reason a woman might remove her reproductive organs.

Take my friend, university student 23-year-old Kyra Yeo, who is about to undergo a hysterectomy. Unlike Jolie, she isn't taking precautionary measures to prevent cancer. Yeo is getting the surgery because she suffers from a painful disorder called endometriosis, a disease which causes uterine tissue to grow outside of the uterus.

Only about half of the 6-10 percent of women who suffer from endometriosis experience chronic pain, and Yeo is one of them. Endometriosis has been the source of debilitating pain that has impacted her life to a profound degree for more than a decade.

"I was so incredibly isolated for several years because I was too fatigued and worn out to hang out with friends. I had a reputation as the 'fun police' and most people who I thought were my friends ended up dropping me," Yeo tells Bustle. "There were some days that I didn't know how I could possibly survive and I didn't know how to live my life like that."

And then, there was her sex life. When you’re in so much pain the insertion of a tampon or a surgically gloved finger makes you feel like you’re being ripped apart, having a fulfilling sex life isn't exactly in the cards.

"It's made things more complicated, because when there is a mutual desire between myself and another person I wouldn't be able to stand the pain. I do want to have sex — it's just not possible."

"Whether or not a person has a uterus doesn't excuse paternalism on the part of doctors," says Yeo. "We're just as capable of making choices about our bodies and understanding, or dealing with, the consequences as we are at owning property or voting in elections — but, suddenly, when fertility is involved, it is decided that we can't know what's best for us."

It’s been a struggle for Yeo to simply win the right to make decisions about her own body. Yeo first asked for a hysterectomy from her doctor at 18-years-old. While all her friends were thinking about college and boyfriends, Yeo was worried about a rogue uterus, raging periods, and indifferent physicians.

“My doctor said to ‘come back in 10 years’ and she started me on three different drugs … one of which stops estrogen production,” says Yeo. But estrogen depletion means a loss in bone density, and by 21, she had developed osteopaenia and was at a moderate-to-severe fracture risk as a result. She asked again for a hysterectomy from her doctor. The answer was, predictably, no.

A hysterectomy is the third stage (and last resort) of a three-stage treatment for endometriosis. The first and second are the use of birth control pills and minor laparoscopic surgery, both of which were ineffective for Yeo. While logic dictates that major surgery is risky and early menopause is best avoided, Yeo feels logic wasn't the only voice influencing her doctors.

Yeo says it often felt like her doctors were only really concerned about her ability to have babies one day. She claims one doctor even flat out refused to give her the surgery on the presupposition that "I'll never know when I will want to put up with the pain to have a baby."

Yeo believes that, over the years, her doctors simply haven't thought she wasn't capable of making the choice for herself.

"Whether or not a person has a uterus doesn't excuse paternalism on the part of doctors," says Yeo. "We're just as capable of making choices about our bodies and understanding, or dealing with, the consequences as we are at owning property or voting in elections — but, suddenly, when fertility is involved, it is decided that we can't know what's best for us."

A hysterectomy or a salpingo-oophorectomy (which Angelina Jolie just underwent) both result in sterilization. But unlike Yeo, Jolie likely didn't face five years of doctors refusing to remove her ovaries; we can't know if they respected her decision because the threat of cancer is immediately terrifying, or because she's older and has children already (and is famous).

On four occasions over five years, Yeo requested a hysterectomy, and the answer was always no. Finally, after a couple of pit stops to the ER, more pelvic exams than any woman should have to endure, a severe bout of depression, and one extremely angry vagina, things swung in her favor. After years of suffering and begging, a doctor finally agreed to give her the procedure.

When Yeo undergoes the procedure in April to remove her uterus, cervix, both her ovaries and fallopian tubes, she'll no longer be in constant pain.

Yeo is looking forward to a life that doesn't involve chronic pain and drugs that result in brittle bones, depression, and androgenizing side effects. Though early menopause will come with its own set of symptoms, she feels those can be managed with hormone replacement therapy more effectively than her current medications manage her endometriosis.

And if relief from her symptoms means not having children, then Yeo says that's something she can live with.

"I've never wanted children. There are a lot of things that I want to do with my life and it just happens that having kids doesn't enter into it at all. I strongly doubt that I will have sadness about it, but I think there will be some substantial emotional upheaval from being able to finally live my life the way I want to," she explains.

Yeo is also concerned that the support that exists for her after the surgery won't speak to her experience.

“In support groups for hysterectomies, everyone is concerned with fertility and how [we might] feel like ‘less of a woman’. Family members and others have asked me how I will deal with the loss of my womanhood.”

What would be useful to Yeo, she says, is a support group offering info on side effects, healing, menopause, lifestyle overhaul, and hormone replacement therapy.

“Everything I have found so far focuses on grief, wearing belly bands on your sagging stomach while it heals, and — thank God for this — keeping your husband happy during your recovery,” says Yeo.

Doctors are an unparalleled resource, but a couple letters at the end of a name shouldn't trump a woman's right to make the best choice possible for herself — even if she was only 18 when she first started asking for it.

When women like Yeo and Jolie stand up and say, this is right for my life, no matter how radical, they shed light on the continuing struggle for a woman's right to choose her reproductive future within the structures of modern medicine.

And that is something to celebrate.

More like this
25 Inspiring Quotes From Black Women To Celebrate Black History Month
By Kyli Rodriguez-Cayro and JR Thorpe
24 History-Making Black Women You Probably Didn't Learn About In School
By Ayana Lage and JR Thorpe
Twitter Is Identifying With Sally Field & Jane Fonda’s Friendship In New Viral Video
By Jake Viswanath
How Ovulation Affects Your Sense Of Smell, Libido, & More
By JR Thorpe and Lexi Inks
Get Even More From Bustle — Sign Up For The Newsletter
From hair trends to relationship advice, our daily newsletter has everything you need to sound like a person who’s on TikTok, even if you aren’t.