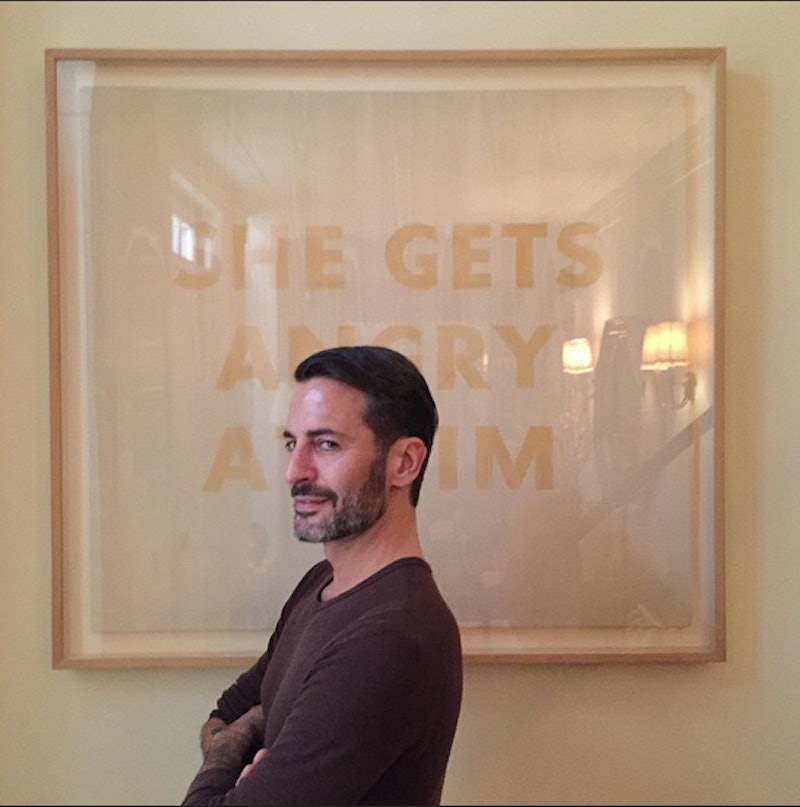 It's been one big change after another for Marc Jacobs recently. But, take a deep breath and relax, because it's not all bad. If your heart broke earlier this week when you heard Marc by Marc Jacobs was coming to an end, don't worry — there's still something to be excited about. Marc Jacobs is now on Instagram! If you thought that EVERYONE in fashion was already operating IG like a pro, well, you were wrong. In fact, Jacobs has been vocally against social media in the past (Marc Jacobs: The Ultimate Hipster), but apparently his views are shifting. And as an IG junkie myself, I can't say I'm mad about the whole thing.

Jacobs' first post is simply a side shot of himself, although not a selfie — I get the feeling it'll be awhile before he jumps on that particular boat. Baby steps. His account, modestly outfitted with the @Themarcjacobs handle, already has almost 40,000 followers in its (less than) 24 hours of existence. Oh, and he only follows three people back: Marc Jacobs (the brand), and two dogs—one of which is his own pup, Neville Jacobs. Casual. The whole account is so very Marc Jacobs, you know, aside from the fact that we all thought MJ just wasn't into social media.

But change is necessary, even for superhuman clothing designers.

So what should we expect to see on the @TheMarcJacobs' feed? Well, first of all, it's only a matter of time before Miley shows up. I give it a couple days, and she'll be there, tongue and all. Personally, though, what I would really love to see is a casual, everyday behind-the-scenes look into Jacobs' life and career as a designer. He often comes across as a little bit, well, pretentious (I mean, come on, he's "THE" Marc Jacobs), and I think one of the most amazing benefits of social media is being able to show the world that, "Hey, I'm a real person. I have a dog named Neville for God's sake. I'm just like you. But friends with Miley Cyrus."

Only time will tell what Jacobs will end up posting, but if he waited this long to hop on the IG train, then odds are whatever he DOES feature will be a little bit special.

More like this
Why Everyone Is "Soft Tagging" Friends On Instagram Right Now
By Alexis Morillo
19 Latinx Therapists & Mental Health Experts To Follow On Instagram
By Kaitlyn Wylde, Naydeline Mejia and Lexi Inks
Kourtney Kardashian Claps Back At Pregnancy Speculation On Instagram
By Jake Viswanath
Courteney Cox & Jennifer Aniston’s Latest 'Friends' Revival Is Everything
By Darshita Goyal
Get Even More From Bustle — Sign Up For The Newsletter