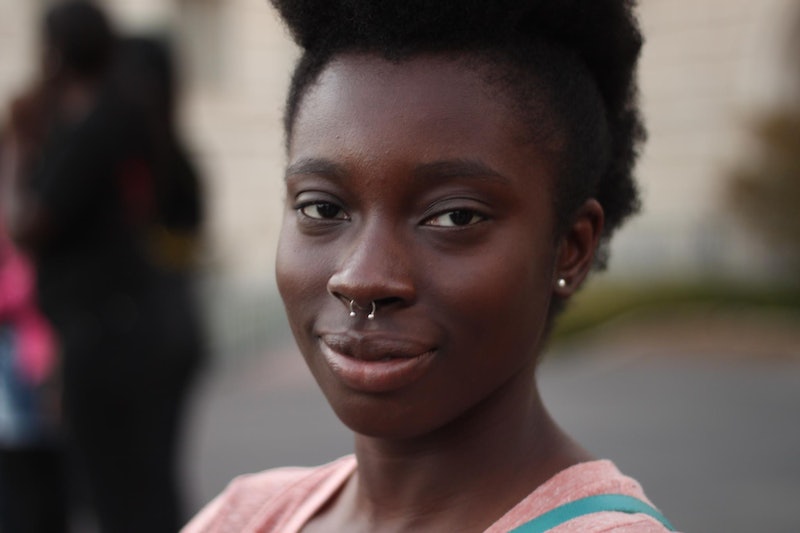 Ever since high school, I always knew I wanted to get one piercing on my face, but I couldn’t decide between an eyebrow piercing or a lip piercing. I think I was leaning more toward the eyebrow piercing until I saw Kelis. Kelis may be a legend for “Milkshake," but I feel like the Kelis from the Flesh Tone era is a bit slept on. It was the aesthetic of that album, and all her amazing looks in the “Acapella” music video in particular, that put the septum ring on my radar as The Look.

I sat on the decision for a few months, gathering up my courage and doing a little research into septum piercing healing and maintenance, and then eventually took the plunge. A few weeks before my 21st birthday, I finally got my septum pierced on Septumber (see what I did there?! *nudge*) 4, 2011. I haven’t regretted it once.

I’ve had the ring for well over three years now and I've experimented with a few different ring styles, transitioning from varying sizes of horseshoe rings to my current small gold hoop. I've gotten so used to my piercing that I often forget it’s there. But having a ring right in the middle of your face tends to draw some attention and put you in a few unique situations. Here are a few comments and moments I've had to deal with since getting my septum pierced.

1. Being told your piercing is unprofessional

The workplace is definitely changing, so I've had jobs where my septum ring didn't matter, but I've also had jobs — like working at a recreation center and teaching in South Korea — where I’ve been told my piercing wasn’t allowed. For that, I find that the septum piercing is one of the most professional “unprofessional” piercing to have. As long as you’re wearing a horseshoe ring, you can always flip it up into your nostril where nobody can see it.

2. Snagging your ring on something

Rings get caught on stuff, it happens. It just looks a bit more ridiculous when you’re snagging stuff on a ring in the middle of your face.

3. Complications from having a runny nose

Having a running nose and a septum ring does require some some extra consideration and maneuvering, but it’s not as gross as most people probably suspect. The only major problem is that the area around my piercing does tend to get a bit swollen and irritated from constantly having to blow my nose.

This is common in cities like Austin, where it feels like half the population has a septum ring. I want to let everyone know I had a septum ring before it was "cool" (even though I'm not sure that's true). But so what if septum rings are having a moment right now? It just provides me with more opportunities to share a moment of solidarity with another septum ring wearer in which we compliment each other's rings and offer tips on where to get new ones (Etsy, of course).

You think you’ve found a sister, but really it’s just an imposter! Actually when I found out that people could get fake septum rings all I could think was “why didn’t I think of that?!” It would have been a bit cheaper and less painful.

6. Being told your piercing is uncommon

Someone in Austin told me “you don’t see this often” and I wanted to remind them that we were in Austin (see above). But I guess if septum rings are new to some people, it's all about perspective. Or they just need to go outside, or attend NYFW, or look anywhere on the Internet...

7. People assuming its a cultural/religious thing

Someone actually said "you're getting in touch with your ancestors!" My ancestors? While septum piercings have a significant history in some cultures, last time I checked (as in the last time a Nigerian relative made a comment about my ring) septum piercings aren’t a part of Nigerian culture. Not all people of color share the same culture.

I’ve received a few comments from guys that have seemed a little off. I can't say for sure where their minds were, but a while back, I wrote a short blog post about piercings, gender expression, and fetishes, and to this day people still find it by searching stuff like “I have a septum piercing fetish,” so that’s definitely a thing.

9. Receiving unsolicited opinions on your piercing

Compliments are always welcome, but no, I don’t need to hear about how you think I’d be so much prettier without a septum ring or how I would look better if I had pierced one of my nostrils instead. If I didn't ask what you thought before I pierced my nose, I don't much care for your opinion now.

I get this question a lot. And although I know people really mean to ask how much it hurt, the fact that I get this question so much makes it a new pet peeve. As I once snappily replied, “somebody put in hole in my face, so yes, it hurt.” If you were thinking of asking, yes, it hurts like sharp, prolonged pinch. So please stop asking me.

More like this
Fermented Skin Care's Barrier-Boosting Benefits, Explained By Derms
By Audrey Noble
15 Hibiscus Tattoos That Bring Tropical Vibes To Your Body Art
By Paris Giles
Everything You Need To Know About Ephemeral Tattoos
By El Hunt
Everything To Know About Daxxify, The Newest FDA-Approved Skin-Jectable
By Olivia Rose Ferreiro
Get Even More From Bustle — Sign Up For The Newsletter