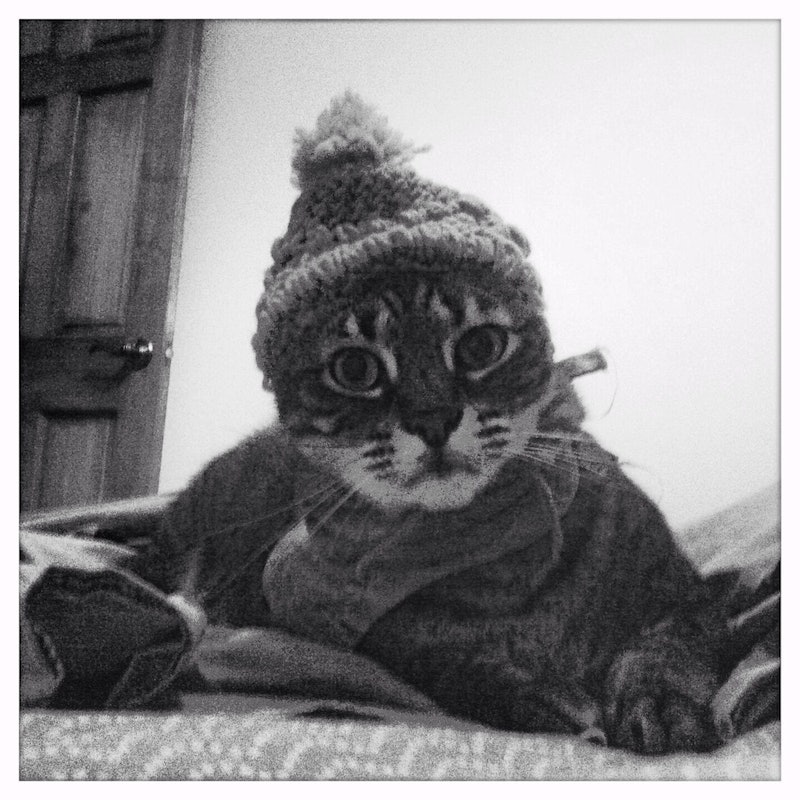 In the five years since its inception, the photoblog Humans of New York has grown from a small project to a full-blown phenomenon. But now there's a new Tumblr in town, and it's giving Humans of New York a run for its money: It's called Felines of New York, and you guys? It is magnificent.

Very little information is available on the Felines of New York Tumblr about the mastermind behind it. The “About” page includes answers to only four questions: Who runs this site? (“A person who likes cats and lives in New York”); can I send you a picture of my cat? (“Please don't. Not yet anyway. We don't even know each other”); are these cats real New Yorkers? (“Yes. You can see that hardened look in their eyes”; and can I contact you? (yes, via the email address provided. But don't send a picture of your cat, re: question number two). However, a little bit of digging — and also some emailing via the contact info left on the site — reveals that we have writer and comedian Jim Tews to thank for this glorious creation.

In an interview with MTV News, Tews noted that while he's quite fond of Humans of New York, he also thinks that “sometimes it takes itself too seriously.” In that sense, Felines of New York is kind of an antidote to the elements of Humans of New York that can sometimes rub readers the wrong way: Said Tews, “It's funny to think about trying to get a touching, human story from a cat” — and he's absolutely right. Not only are cats not human, but moreover, they usually couldn't care less about you. In short, they're… well, cats.

Where does he find the cats? In the early days of the Tumblr, Tews said, he was mostly just using pictures he had on his phone; now, though, he's actively going in search of cats to photograph specifically for Felines of New York. That said, though, he's still keeping it “in the family,” so to speak: He told MTV News, “I'm trying to keep it to friends and friends of friends for now. But I'll branch out more eventually.” Hopefully that will include bodega cats, cats like the one that lived at the tire shop by my old apartment, and more.

Getting comfortable with yourself is one of the best things you can do. At the same time, though...

2. It's OK if you need time to figure yourself out.

Identity is fluid. Take all the time you need to get to know yourself, and feel free to change whenever you want.

3. Have at least one place you can go where you always feel safe.

If you have your best ideas while you're there, think of it as an added bonus.

Especially if you're in the process of plotting and scheming.

5. Don't take your anger out on others.

6. Don't waste your time on things that make you unhappy.

Me too, Mimi! Maybe we should start a club! A club that never meets, because parties are the worst.

7. Make an effort to broaden your horizons.

You'll never know what you're missing if you don't get out there and try new things.

8. Be wary when necessary, but don't shut everyone out.

Is my friendship enough, Shutter?

You don't necessarily have to make a living doing it (although if you're able to, more power to you) — but do set aside some time for the things that make you happy.

10. Hang onto your sense of wonder.

Don't let yourself become too jaded. There's joy to be had in the most unexpected places — as long as you know to look for it.

More like this
Why TikTok Is Flooded With Controversial Videos About "Pick Me Girls"
By Courtney Young
This TikTok Song About An Unrequited Romance Has FYPs In Shambles
By Emma Carey
Why Everyone Is "Soft Tagging" Friends On Instagram Right Now
By Alexis Morillo
The 5 Best Rugs That Cats Can’t Destroy — & Why Your Cat Scratches, According To A Vet
By Danielle Calma
Get Even More From Bustle — Sign Up For The Newsletter