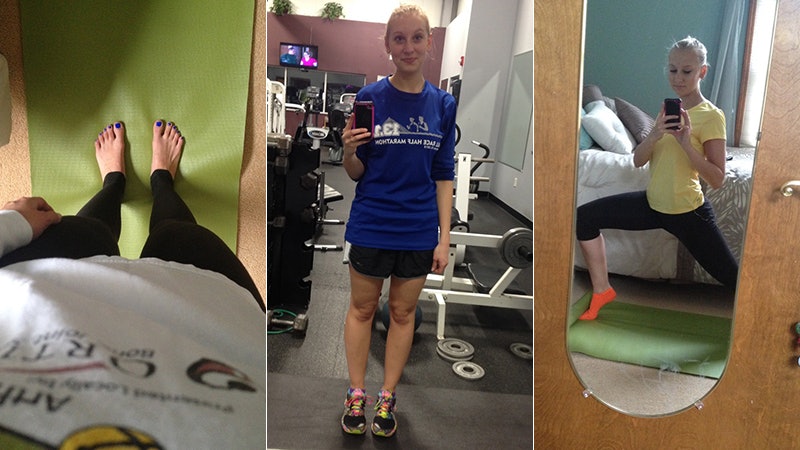 While I was trying out a brand of lipstick, I accidentally went to the gym with the bright color fresh on my lips. When I started changing clothes in the locker room, I realized I had completely forgotten my running shorts and had to find a different outfit to wear to the gym. I ran back to my car, which is like my secondary closet, and thankfully found a pair of running tights.

Aside from the rare days I run outside in the fall, I had never worked out in running tights. I'm an old T-shirt, running socks, bun on top of the head, let's get this workout out of the way gym-goer. When I started running on the elliptical in my tights, however, I felt like a whole new woman. I pushed out a 5k super easily, and even kept going for a mile and a half longer.

My first thought, of course was something like "DO THESE PANTS HAVE MAGICAL POWERS?!" And my second, more reasonable thought, was: Why don't I change up my exercise gear more often? If wearing atypical bottoms to the gym could have such an amazing effect on me, I feel like more changes in my gym fashion could possibly improve my workout. So I tried it.

This is the bright lipstick day! I was wearing a DIY'd workout tee and those running tights. I sincerely apologize for the sweaty selfie, but I had just run 4.5 miles, was feeling those endorphins, and was super excited to see that my color stayed on as I sweated a lot.

After this, I stayed an hour and a half longer lifting weights and doing some HIIT workouts. As a stated earlier, this was super unlike me, because I was a get-in, get-out kind of girl when it came to the gym. And the fuchsia shade didn't even get that many double takes!

I figured if wearing long pants and tank would work, then wearing shorts and a long-sleeved shirt would work too, right? This was another successful workout day. I didn't run quite 4.5 miles, but I did go beyond my normal 5k. After, I met a friend who helped me do some squats and lift weighs. I didn't feel as awesome as I did that first day, but I didn't feel like I wanted to leave immediately after, so that has to be some sort of success.

Because I had a super busy schedule, I had to workout from home today, so I did some yoga and more HIIT workouts. Also, you try to take selfies at the gym everyday and not be "that girl." It's difficult!

As far as the outfit goes, I wasn't feeling awesome at all during my workout today. Previous experience had already put a distaste in my mouth for yoga capris. It's like how you sleep with one leg in the covers and one leg out — my body can't decide between sweating or shivering.

The first time I wore this shirt was during my first mini-marathon. I figured it could balance out my dislike for the capris and maybe even make me like them again!

Unfortunately, it didn't. I did the complete workout, but was so ready for it to be over.

I went back to my typical running shorts and old T-shirt look. I stayed on the elliptical for five minutes, completed two arm exercises, and one leg exercise, then left the gym. My entire visit was around 30 minutes. I was just not feeling it on Day 4.

To make packing lighter, I also wore this shirt all day, and changed into running shorts and tennis shoes at the gym. Leandra Medine would titled this attire "The Norm *Core* Workout-er." The ManRepeller founder described this character as a woman who "cares enough about appearance to avoid the aforementioned NBA attire, but she’s too tired and stressed out to put an ensemble together. She can be found texting from the elliptical, leaving yoga 10 minutes early to answer an email, then changing back into work clothes without a shower."

Women's Health Magazine discovered that exercisers who wear the same clothes throughout the day then to the gym could suffer from "enclothed cognition." Meaning, wearing a certain clothes to the gym triggers something in your brain that means its time to work out. But wearing something you wear during the day to the gym could mean you're just running errands. I definitely made this mistake.

I had to do another yoga day from home. Before actually sweating, I realized the only outfit I hadn't tried was yoga pants and an old T-shirt.

I actually felt awesome again today. I decided to run a 5k outside after I did some quick yoga stretches and ran a little longer than just the 5k, again. This could mean that either my running tights actually do have magical powers, or I just know what I like and don't like in exercise attire.

Changing up my workout attire definitely did make me feel better in the midst of my workout. In turn, changing outfits also made my workout better than it previously was with my tried and true shorts and ripped T-shirt.

Of course, there is something to be said about how I was just feeling about working out each day. Still, all of these days before I went to the gym or did yoga were not inherently bad. I felt fine before each workout and was equally excited each time because I realized I was about to have an awesome or not-so-awesome workout. Plus, I truly enjoyed this experiment as a reliability partner, forcing me to go to the gym.

The biggest takeaway for me was that enclothed cognition is definitely a thing. Working out in clothes you wear both at the gym and to the grocery store could affect how well you do at either of those tasks. You could be sprinting up and down the aisles of the local market or reading the nutrition information on Luna bars at your gym instead of actually sweating. I definitely found that switching up my workout gear affected my workout, and I'd suggest you try it to if you're in a bit of a gym dry-spell. If anything, it gives you an excuse to buy new, spring workout clothes.

More like this
The Beauty Industry Disrupter From Dallas
By Jordi Lippe-McGraw
Prefer Alcohol-Free Perfumes? Water-Based Fragrances Are On The Rise
By Audrey Noble
12 Absolutely Angelic Cherub Tattoo Designs
By Paris Giles
The Body Shop’s New Range Has More Antioxidants Than Retinol
By Justine Knight
Get Even More From Bustle — Sign Up For The Newsletter