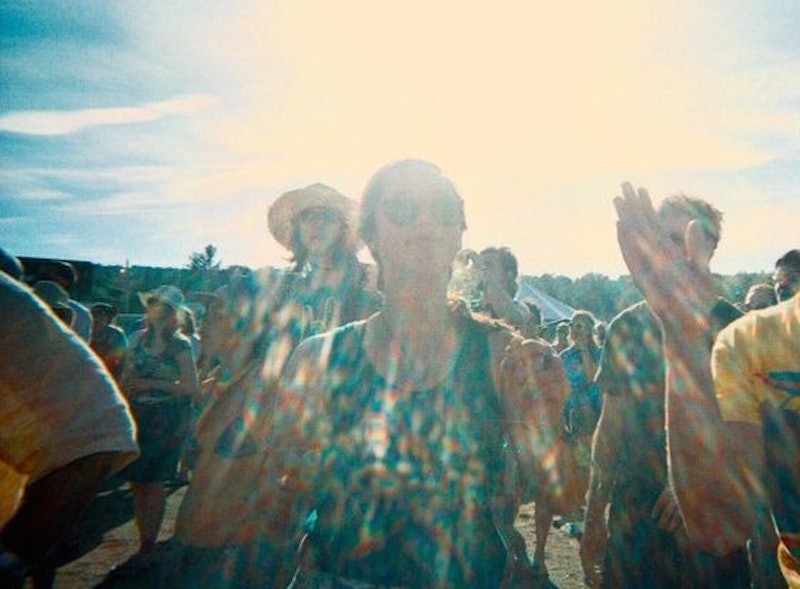 The summer before I started my junior year of high school, my dad and I were in the car listening to NPR, as we do. Suddently the radio host mentioned something about a summer music festival happening that September in Austin, Texas. Headliners included Bjork, the White Stripes, and Bob Dylan. My dad wanted to see Bjork, I wanted to see the White Stripes, and we both wanted to see Bob Dylan, so we somehow convinced my mom to let us take a family vacation to Austin City Limits (ACL) without really knowing what we were getting into.

We flew from New York to Texas on a Thursday after school, and spent that weekend bopping around Zilker Park with all these drunk hipsters. The entire experience was overwhelming and wonderful, and I was never entirely sure what was happening except that I would have the chance to see the White Stripes. (Spoiler: I actually didn't have the chance to see the White Stripes because they cancelled their ACL appearance in 2007 because Meg White was suffering from "acute anxiety.") In that one weekend, I saw so many bands that I loved, and still love: Cold War Kids, the Killers, Arcade Fire, Queens of the Stone Age, M.I.A., and the Arctic Monkeys. ACL was my first introduction to the world of music festivals, and after that weekend, I was hooked on the whole vibe and wanted to experience more.

But as you might be able to glean from the photo above of my little brother and me from 2007, I wasn't exactly the most stylish girl at the proverbial party, especially when I started going to music festivals. (Yes, I am wearing a white men's Hanes t-shirt and dark denim Bermuda shorts and a low ponytail. I really must stress that I was awkwardly 15 when that picture was taken.) Although there's plenty of advice out there about what specific outfits to wear to music festivals and what outfits to avoid, nothing will teach you what to wear to a music festival like going to one... or 12.

Since my first festival, I've attended about a dozen more, from Warped Tour to Bonnaroo, and have made my fair share of rookie fashion mistakes. There's a fine line between fashionable and practical, and I can pretty confidently walk it at this point. Don't make the same gaffes I have, and learn from my mistakes as you get ready for festival season.

The first weekend-long music festival I attended without my family was Nateva. Don't worry if you've never heard of it, because it doesn't exist anymore due to not being very well-organized. It took place in Oxford, Maine in July 2010, and my best friend from middle school and I road-tripped to the festival together. In order to get free admission, because we were both broke college students at the time, we volunteered to work shifts at the festival, which mainly meant standing in a parking lot at a racetrack in the middle of Maine, directing cars either toward the music festival or the drag race that was happening concurrently. (I told you the festival wasn't that well run.)

We were ready for the summer heat, but what we forgot was that we were in Maine, and Maine in the summer can be chilly, especially when the sun goes down. When you're packing, remember to bring lots of layers including a good sweater, because the nights can sometimes get cold, which brings me to my next point...

2. Check The Weather, And Invest In A Raincoat

Not every festival is going to have perfect weather all of the time, so it's always good to check the forecast before you go, and pack accordingly. But the one article of clothing you should bring along, no matter what the forecast says, is a raincoat. This is a lesson I, or, I guess, my friend, learned the hard way.

I went to Camp Bisco one August, and threw a light rain jacket from REI into my backpack as a precaution, even though there was no obvious threat of rain. The first full day of the festival started out sunny and beautiful, so my friend declared that shirts were bogus and he triumphantly went to all the shows shirtless, but then it started to torrentially downpour halfway through Shpongle's set and he was soaked to the bone for the rest of the weekend and got a cold, all because he didn't have a raincoat. I, however, was cold but dry, thanks to my raincoat and propensity for over-packing. Throw a good raincoat in the trunk of your car. Your health will thank you.

That's me and RJD2, who you might know as the guy who wrote the theme song for Mad Men. I got to meet him once, which was pretty cool. But do you what's even cooler? If you guessed, "The watch on your left wrist," you'd be correct! And a really fantastic, colorful, plastic water-resistant analog watch, at that.

Schedules are jam-packed at music festivals, so you'll need a way to stay on track, but you shouldn't expect to rely on your phone as a timekeeper because it will inevitably run out of battery on the first day, and lines to re-charge it at the wireless company-sponsored charging station will be hours long. Or, you'll be dancing in a dark tent late at night to Skrillex, and the beat will drop and your iPhone will fall into the mud and you'll think you've lost it forever only to realize that it's sitting at your feet, relatively safe and sound, except for the mud. (This happened to me at Camp Bisco. I've never been more grateful for an OtterBox.) Wear a wristwatch, stay on schedule, and don't miss your favorite acts.

Here's the thing about being outside during the summer, in general. It's hot, and I sweat a lot. Although there are usually shower stations at weekend-long music festivals, the lines can be brutally long and the cost can be crazy expensive. Three days of avoiding showers and sweating profusely make for a perfect storm of greasy hair, which is why a bandana is the perfect accessory to keep that hair up and that sweat from dripping into your eyeballs.

5. Keep An Eye Out For Freebies

When I was 14, I went to Warped Tour at Nassau Coliseum with my mom and my little brother and my friend Austin. We got there early in the day because we were young and unsure how music festivals worked, so a dude with a walkie-talkie and all-access pass came up to Austin and me and asked us if we were 16. We said yes, and he then asked if we wanted to volunteer backstage to help the caterers serve food. In exchange, we'd get our own backstage passes and free tank tops. Of course, we said yes, and served ice cream to roadies for the next four hours.

After all that ice cream scooping, the shirt I had been wearing was sticky and smeared with weird chocolate stains, but fortunately, I had a sweet new tank top to change into. The lesson here is be on the lookout for promotional t-shirts and sunglasses, because chances are, what you've brought or worn will get dirty or lost, and that's when you'll be glad you stocked up on freebies.

There are certain accessories that should be avoided. (I'm looking at you, feathered headdresses. Seriously, do not show up at a music festival wearing a feathered headdress.) But that doesn't mean you shouldn't bring some costumes along. The best music festivals are filled with people who are there to have a good time and let their freak flags fly, so don't be afraid to join in. It's fun to dress up and try something that would never fly in polite company, like that viking hat I wore around at Nateva, or the Braveheart-inspired face paint I put on with my friends at Virgin Mobile Freefest. Plus, costumes are a great way to start a conversation with a stranger, another of the fun things that can happen at festivals.

7. Don't Be Too Precious With Your Outfits

What some people don't seem to understand about outdoor music festivals is that they're camping for a weekend. Although it's great to get dressed up and have fun with your outfits, it's important to remember that you will be outside the entire time. You will encounter mud and dirt and grit and grime. At every festival I've ever been to, I've either ruined a piece of clothing or pair of shoes, or broken a pair of sunglasses from moshing too aggressively, or lost a baseball cap because I was too drunk. Have fun with what you're wearing, but work under the assumption that you won't come home with everything that you bring along.

But believe me when I say losing a pair of sunglasses at a music festival is totally worth all of the amazing experiences you do have and fabulous memories you create while you're there.