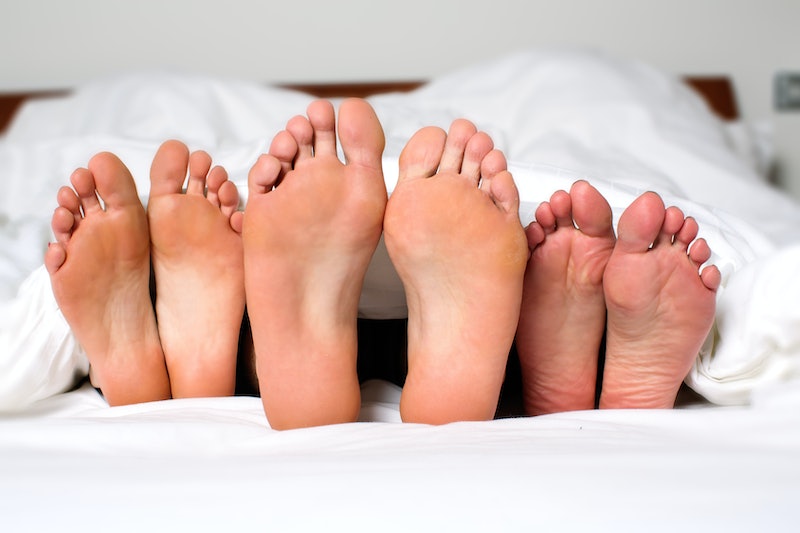 That's why when my roommates and I started casually joking about having an orgy at the beginning of last semester, everyone was ambivalent. Sex? With one another? Would there be repercussions? Would there be regrets? And most importantly: Why? The conversations would mostly happen while we were drunk (tequila, am I right?); every now and then, however, it would extend to sober moments where the room was usually divided into "NO," "Maybe if I'm drunk enough on tequila?," and "YES." But no amount of conversation or alcohol could have properly prepared us for the actual event, the moment where the four of us were all in agreement at the same time and in the same place about getting naked and doing a thing usually reserved for people who aren't just roommates or friends.

OK, so no, being drunk isn't necessarily important — but in our case, it helped us all loosen up a bit.

The people involved were my two straight male roommates, my straight female roommate, and myself, a lesbian woman who is totally entertained by sex with men every now and then. It started with the relatively innocent removal of clothes in one of our bedrooms. That part was easy, as none of us are particularly afraid of made uncomfortable by the naked human form. It then naturally progressed into a lot of touching, hugging, necking (which is my least favorite word, but accurately describes what was happening), and laughter. We were all very drunk, a little turned on, a little embarrassed and giggly, and a little hesitant — who was going to make the first move? Who was going to make it happen? We all stood around, completely naked and gently feeling out everyone's boundaries... until one of my roommates loudly said "Guys, let's have this orgy." And with those magic words, my roommates and I started to have sex.

You probably have a lot of questions, so here's what I'll say: Yes, we were mostly paired off into twos since the boys were not interested in having sex with one another, but we also all had sex on the same queen sized bed. Yes, there was a double blowjob involved. Yes, the boys were into watching the girl-on-girl action (and no, it didn't feel like objectification). No, it wasn't tricky or complicated to maneuver four bodies; no it doesn't make my female roommate gay because we ate one another out (just like it doesn't make me straight or bisexual for consenting to have sex with men); no, there was no emotional attachment between anyone after the fact; and no, actually, it wasn't awkward before, during, or after. And if you're wondering how or why four people who don't necessarily have any sort of romantic inclination towards one another had a fun mini-orgy, I couldn't tell you exactly why — but I can offer you a theory.

In general, we are socialized to believe that sex happens between people who are either in love, are physically and/or emotionally attracted to one another, or have some sort of label beyond just one of friendship — and in general, all that is often true. But it's also true that humans have sex for pleasure, for a unique intimate experience with other human beings unattainable through other forms of physicality. It allows you to connect with someone both emotionally and physically in a complex ritual about giving, receiving, letting down your proverbial hair, and releasing endorphins. So why shouldn't it be socially acceptable to engage in that process with people you love in a way that isn't necessarily romantic? The point of our mini-orgy wasn't for everyone to orgasm; hell, it wasn't even necessarily to do all the things I just listed. But the result, for me, was a certain type of closeness to those people that I've never experienced with anyone else before.

To love someone in the way you love a platonic friend is to know their mind. But so much of our existence is rooted in our bodies and the intimacy and love we can convey through them — so why not understand the mechanisms of the bodies of those for whom you care deeply? I'm not necessarily saying that if you don't have sex with your friends you'll never truly know them. But I am saying that having sex with your friends, roommates, or other people towards whom you feel a non-romantic love can actually be surprisingly rewarding, completely relaxed, and more low-stress than other things in life.