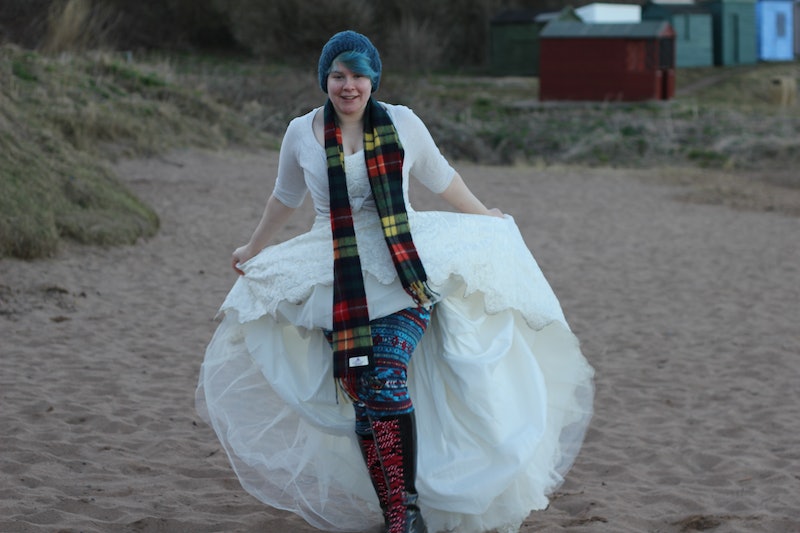 Whilst I do share in the excitement when my friends announce that they're getting married, I currently have no plans to ever tie the knot myself. I’m not saying I’ll never change my mind, but the idea hasn't really appealed to me thus far. Yet I own a lovely second hand wedding dress. I needed one for an art project idea, so my friend Chloe and I headed down to a local charity shop, a poster in the window of which proudly proclaimed, “Wedding dresses from $30!” And I picked out two dresses to try — one quite simple, ivory number with straps and one completely over-the-top, strapless, gigantic-skirted, bedazzled princess-y thing.

I had never wanted to be a princess until I encountered this dress. I had to try it on. We dragged its surprisingly hefty weight into the fitting room and Chloe laced me up. It was hilarious. I felt like some ridiculous fairytale princess. It wasn’t the one. Ultimately, I went with the second dress I tried on — the understated ivory gown that felt less like a joke and more like an actual wedding dress.

So here I was, a woman who was pretty sure she’d never get married, twirling in a wedding dress in front of the mirror and feeling pretty good about it. Chloe and I giggled and imagined the reactions my boyfriend might have when he saw it. I texted him later, making the bold claim that, "You are going to want to marry the pants off of me when you see me in this dress!” Feeling good in a wedding dress isn’t a proper reason to get married, but I was starting to understand the wedding dress hype.

After several weeks of the dress hanging in my room, I decided that it needed an outing. No, I wasn’t going to get married. I was going to wear the wedding dress for no reason. It’s not a wedding dress unless you wear it for your wedding, right? I imagined casually rocking the wedding dress on a normal day like, “What? This? No, this isn’t a wedding dress, this is just my dress! There’s no wedding here!” I decided to wear it with my everyday Dr. Martens, a pair of leggings, my gorgeous vintage leather jacket (which I have my mother’s biker days to thank for), and a scarf and beanie, because it’s breezy on the coast where I live.

I was more nervous than I thought I would be about how people would react, and decided to go to a different town to the one where I live and have to work, go to the supermarket and be recognized by people. Actually, I ended up going to a different country, but I live on the Anglo-Scottish border so that only involves traveling a few miles up the road. My first observation: Even an understated wedding dress is impractical. I swept along various bits of dirt as I crossed the driveway and struggled to cram myself into the back of Chloe’s Vauxhall Corsa.

Arriving at our destination, we parked the car near the harbor and I flopped about like a stranded fish as I wriggled my way out of the back seat. I quickly had to come to the terms with the fact that my dress was going to get dirty. I’m 5’ 5” and was wearing flats, so naturally the bottom hem skimmed the ground as I walked. However, I did enjoy the floaty feeling this gave me and I also wondered why anyone would even make a big deal about wedding shoes with a full-length dress. You can’t even see them; just wear something comfortable!

As we passed a few people on the way to the fish and chip shop, glances did linger, but nobody said anything. In all honesty, I had expected to attract a lot more attention than I did. I had envisioned myself having to explain myself to people, having opportunities to create elaborate stories about being left at the altar or having run away. The lady at the counter in the ice cream parlor didn’t say anything and after initially eyeing up my gown when I walked in, politely made super-intentional eye contact throughout the whole transaction. I have to say that I felt more self-conscious in the confined space of the ice cream parlor than I did on the street. As if somehow, outdoors, people might mistake me for an exotic bird or something instead of an unusual lady in a leather jacket and a wedding dress. Indoors, I felt under scrutiny — even though in reality, nobody was actually scrutinizing me.

Smokers outside the bars cast a slightly curious eye over me, but again, nothing was said. Dog walkers on the beach smiled — genuinely smiled — as they said hello. I suspect maybe they thought I had actually gotten married that day and were giving me sweet congratulatory smiles. A dog barked at me — I guessed it didn’t like my dress.

Whilst at the beginning of our little expedition I was pretty uneasy about what people might say and about the level of attention the wedding dress would attract, it was a little bit of an anti-climax to actually encounter such understated reactions. I think maybe most people who see you in a wedding dress just assume it’s your wedding day and move on. The dress I chose was actually pretty comfortable, but still impractical due to its numerous layers and floor-sweeping length. However, wearing a dress of impractical length and volume is, in short, fun. It makes you feel like a little kid in fancy dress — it detaches you a little from everyday life if you allow yourself to get carried away with it. Whilst nothing much happened when I wore a wedding dress for no reason, I would highly recommend twirling in one on a beach to anyone in need of a pick-me-up.

More like this
Jennifer Lopez Wore A Naked Dress To The Shotgun Wedding Premiere
By Dominique Norman
Phoebe Dynevor Serves ‘Bridgerton’ Underboob In Stunning Floral Gown
By El Hunt
Is Miley Cyrus Wearing Liam Hemsworth's Suit In Her "Flowers" Music Video?
By Allie Fasanella
Kylie Jenner Wore A Stunning Corset Dress For Paris Couture Week
By Dominique Norman
Get Even More From Bustle — Sign Up For The Newsletter
From hair trends to relationship advice, our daily newsletter has everything you need to sound like a person who’s on TikTok, even if you aren’t.