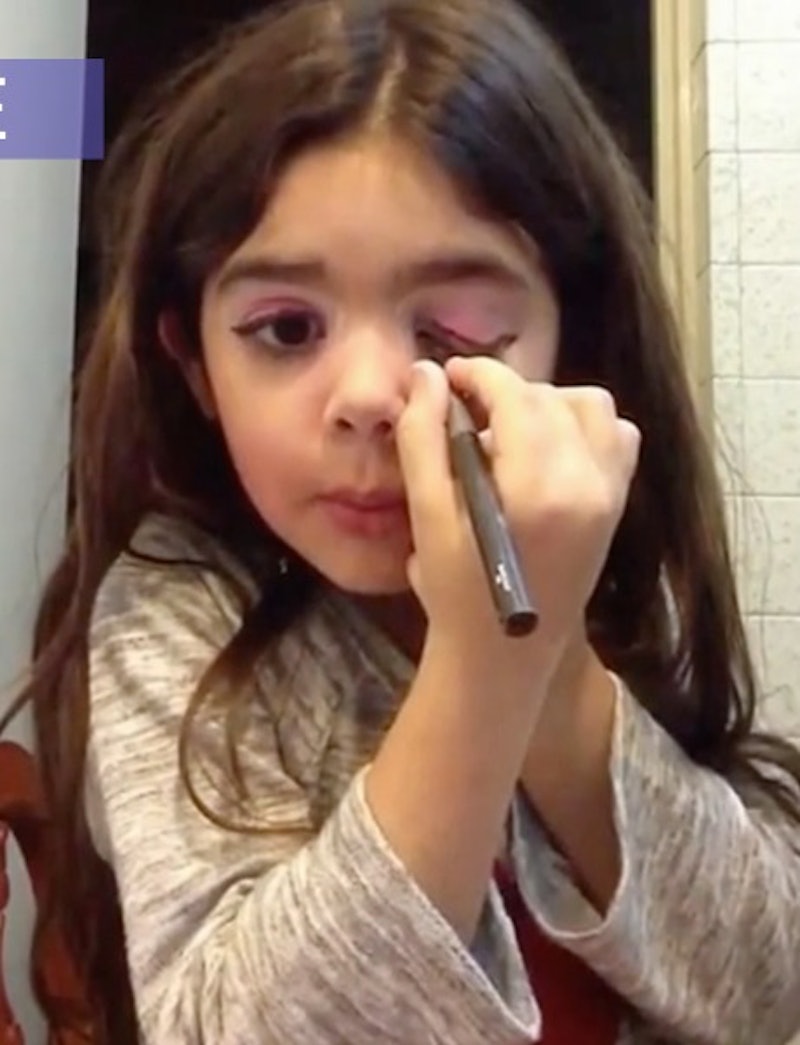 Mamas are not happy about this rising YouTube makeup star.

Danna Gomez primps and primes in front of the camera, instructing viewers on how to apply contour to thin the nose. What's the outrage about? Well, Danna is five. Five-year-old Danna Gomez's makeup tutorials in her now-viral YouTube video series has incited backlash from viewers, most asking why a parent would ever allow or exploit her own daughter by encouraging such adult-like behavior, and online no less.

Here's what we know: the videos were filmed by Danna's aunt, Denisse Gomez, who told The Daily Mail:

"Danna loves showing off and enjoys being on the camera, and as long as she's having fun and doing it on her own initiative then what is wrong with it? Children have always played adult games like pretending to be doctors and nurses, or mummies and daddies, or even fireman or cowboys. So what is wrong with imitating an adult in playing around with makeup?"

I think she might have a point. While some of Danna's application tactics are eerily and (arguably) dangerously adult, her child-self shines through. She dresses up like Frozen's Princess Elsa and draws a heart on her cheek with what looks like an eyeliner pencil. But then she goes on to apply foundation (pretty flawlessly) and then finishes off her look with a tiara.

Gomez also claims the videos were posted to her YouTube channel with Danna's parents' permission.

We can only hope that Danna's parents have explained to her the difference between play and real life. I'm not against a five year old doing makeup (I used to put makeup on my grandfather when I was that age) but I am against a kid playing with hair and makeup and clothes sans having that conversation with their parents. According to The Daily Mail, Danna likes watching other YouTube makeup stars and learning from them. So maybe it's a little bit of play mixed with some real life? Still problematic.

At the end of the day, hopefully Danna knows that the way we look should be a choice made for the sake of feeling good and having fun, not something we do because everyone else says it's best. But, that's a conversation best left between her and the adults in her life: not for the comment section of YouTube.

That being said, you have to give this little girl props for speaking so politely, confidently, and articulately. I know some five year olds who can't string a sentence together. This girl is obviously speaking from a place of intelligence, confidence, and fearlessness. Who are we to discourage that? In a time when YouTube can be a full-time job one day for her, I think encouraging public speaking and entrepreneurship is our duty as we raise the next generation of daughters.

Let's just maybe lay off the contouring and "thinning of the nose" talk, K?

You can view more of her original videos here.