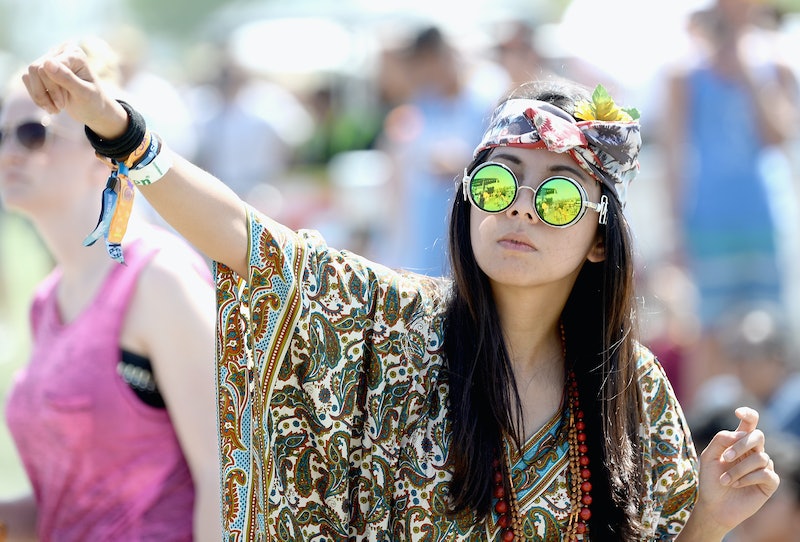 It seems what you wear to music festivals is just as important as the musical guests at the festivals themselves — especially at Coachella. Guess and Lacoste have had a presence at Coachella before, and this is the sixth year H&M has been a sponsor of the fest, but other fashion designers and brands are finally taking the cue that festival fashion is just as important. According to WWD, Coachella will host fashion shows and pop-up shops throughout the three-day festival weekend.

This year Pandora jewelry will host a Pandora Fashion Jewelry Experience at the Parker Palm Springs that will feature four runway shows showcasing specially created pieces by Siwy Denim, Plenty by Tracy Reese, Nanette Lepore, and WhiT. But they aren't the only new name you'll see at Coachella this year — the Council of Fashion Designers of America, or CFDA, and PopSugar Inc. are co-hosting a Must Have Box brunch with guest Mara Hoffman that will feature a collection of items from CFDA members, and a portion of the sales from the event will benefit the CFDA foundation. It's even rumored that Rachel Zoe will make an appearance with some type of planned event.

You could definitely argue that Coachella was the event that single-handedly started the industry's festival-wear fashion frenzy. Every store you shop from, whether it's Forever 21 or River Island, there are specific categories titled "Festival Fashion" featuring clothes that are aimed specifically for the event. And although Coachella has been around for decades, it did not used to be this way. While some festival-goers count down the days until they can rock their fringe romper to the desert, others are annoyed that it's become such a fashion scene. Sorry to the people who identify with the latter because at this rate, with dedicated fashion shows and pop-up shops, we don't think there's any stopping Coachella from continuing to reign as a major fashion event.

More like this
Prefer Alcohol-Free Perfumes? Water-Based Fragrances Are On The Rise
By Audrey Noble
How To Get Your Hands On The Pat McGrath X Supreme Nail Kit
By Justine Knight
12 Absolutely Angelic Cherub Tattoo Designs
By Paris Giles
The Body Shop’s New Range Has More Antioxidants Than Retinol
By Justine Knight
Get Even More From Bustle — Sign Up For The Newsletter