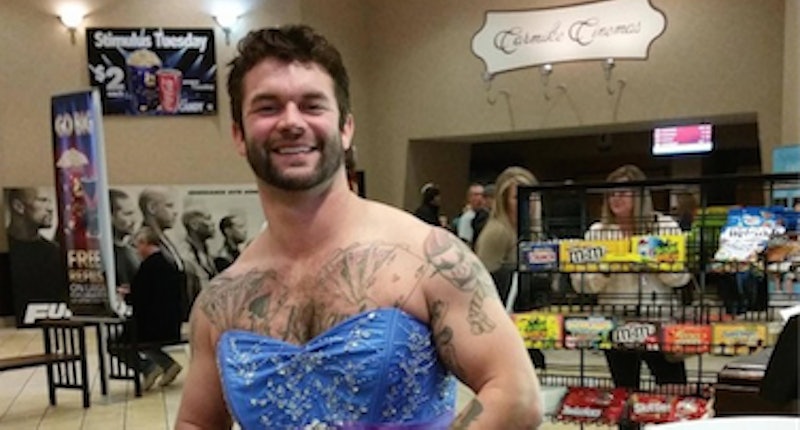 Parents often say they would do anything for their kids even if it is embarrassing, right? Well what about uncles? This 25-year-old Alabama uncle, Jesse Nagy, wanted to take his niece Izzy to see Cinderella , but she was feeling too embarrassed to wear her "princess" dress. Uncle Jesse did what any normal uncle would do — he asked a friend if he could wear her prom dress so that Izzy wouldn't feel embarrassed to wear her own princess dress to the movies. Yes, this fully-grown, bearded uncle wore a princess dress with his niece so she would feel more confident about wearing hers. Cue the "awws" because this was a super cute moment captured by none other than one of the movie theater's employees who probably didn't think it would turn into a viral social media post.

That theater employee posted the photo of Jesse and Izzy in their matching princess dresses to Reddit, which quickly amassed 1.7 million views.

"She said 'you could be a princess too,'" Nagy said in an interview for ABC News. "We made the trade-off and I said, 'OK, we can both be princesses,' but she had to have the crown. I thought 'fair enough!'

We've heard of parents and other family members dressing up with kids for halloween — especially celebrity parents — but props to Uncle Jesse for making an ordinary day into an extra special one for little Izzy. Jesse Nagy definitely gives Uncle Jesse from Full House a run for his money.

Jesse Nagy ended up posting this photo to his own Facebook account, and now there's even a community Jesse Nagy Facebook page. Gotta love our everyday viral celebrities!