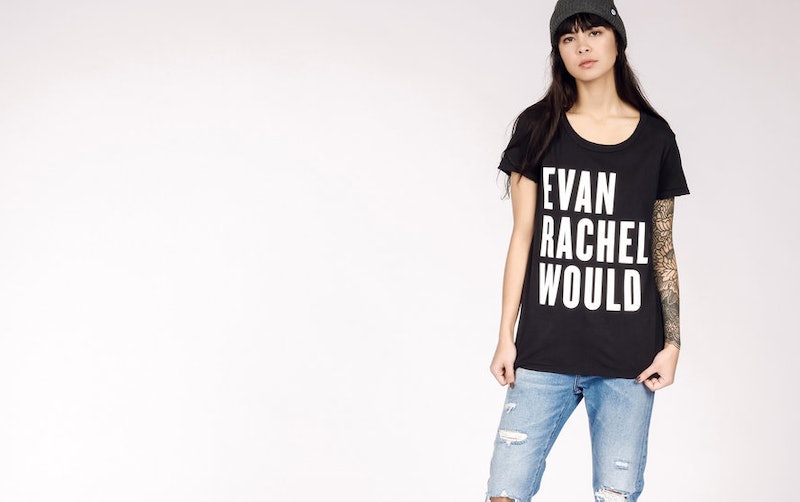 I love a good pun. I also love a black graphic tee. So it would stand to reason that I adore this pun-driven Evan Rachel Wood charity t-shirt produced by Wildfang, which reads "Evan Rachel Would." Get it?!

For the slouchy, comfy tee with the distressed hem and collar, Wildfang got all cute with EWR's name. The actress collaborated on the design, too. It's limited edition, so you might want to grab one (or six) while you can, especially since it's an easy and fashionable way to do something good.

The shirt is linked to a short film that dissects gender constructs in terms of femininity in fashion and tomboy chic. It co-stars Sonic Youth icon Kim Gordon and The Gossip's Beth Ditto, each of which are fashion rule breakers.

The video examines what happens when you get adventurous and just say "yes" to what life throws your way. And that includes wearing a bold graphic t-shirt.

The concept of "Evan Rachel Would" is a way cooler take on that whole Zzzz-inducing "YOLO" tag. You know: "You Only Live Once." Although I'm a huge supporter of the life philosophy surrounding the phrase, I don't exactly want "YOLO" all over my clothes. I'd much rather embrace the hip, empowering ERW mantra.

Better yet, all of the proceeds from the shirt are donated to Friends of the Children, an organization which narrows its focus on at-risk and vulnerable youth by breaking the generational cycle of poverty and by having mentors spend quality, long-term time with them.

The edgy, angsty, and endearingly sarcastic ERW asserts herself in the short film that accompanies the campaign. Check it out below!

The versatile actress, who's starred in everything from Thirteen to The Wrestler to True Blood, is pretty much my eternal girl crush.

Would Evan Rachel Wood do menswear? Of course she (Evan Rachel) Would.

Girl looks gorgeous no matter what she dons.

Damn right she does.

But she can also turn it up when she goes feminine and ladylike.

Whether she gender-bends with her fashion or goes full on girlish, she's amazing.