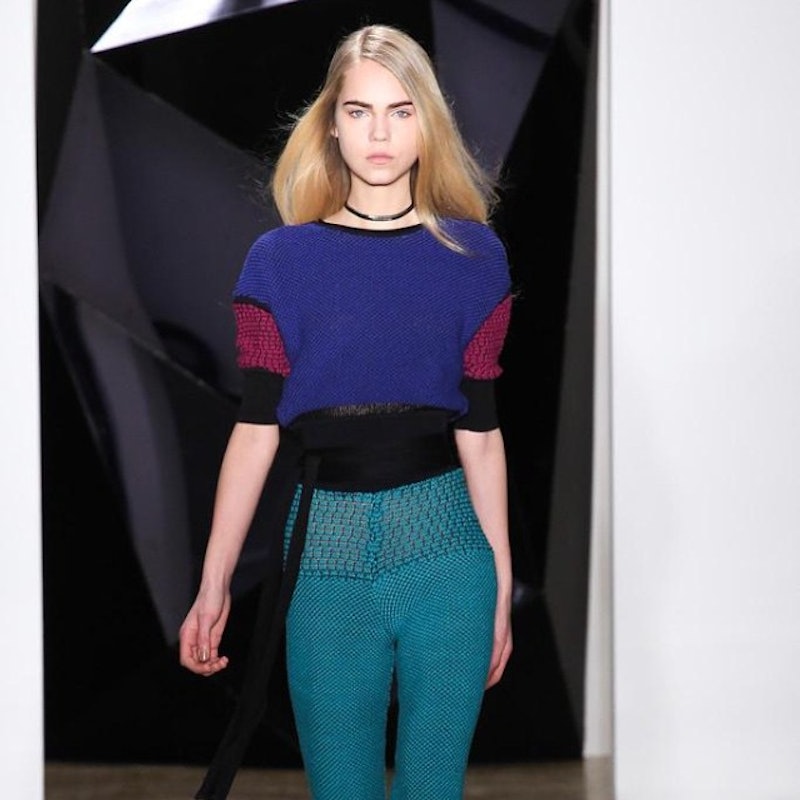 You know those awkward moments when people say you look like a celebrity that you don’t really find that attractive? Well, that totally wasn’t the case for this Danish model: Line Brems is being called the next Cara Delevingne, according to Fashionista. Perhaps it’s her face shape and her bushy, on fleek brows? Or maybe it’s the blonde hair and perfect middle part? Honestly, it’s just everything.

While Delevingne was missing for most of Fashion Month, Brems was busy modelling 3.1 Phillip Lim, Thakoon, Jeremy Scott, Fendi, Dolce & Gabbana, Maison Margiela, Louis Vuitton and others. Fashionista spoke with Brems and found out some cool facts about this mysterious doppelganger.

First off, she’s 18 years old and was scouted just last year at a festival in pouring rain. That's when you know you've got what it takes to be a model — you're scouted when you're as damp as a wet dog! Secondly, she digs Tommy Hilfiger’s creativity and had fun modeling for Hilfiger during Fashion Month. And third, she admires models with “strong personalities [who] stick to their own beliefs.” She didn’t mention Delevingne, but instead talked about “this girl from Germany last season, Eilika Meckbach. She’s not so well known yet but she’s a great model and has an amazing attitude.”

When Fashionista brought up the uncanny resemblance between her and Delevingne, Brems was, “flattered at the suggestion.” She said, “Who wouldn’t be? She is gorgeous.” But then she went on to say, “I guess I can see why people would think that. We both have big brows and perhaps the same color hair. But I think I look like me, and Cara looks like Cara.” Mm, own yo beauty girl. You ain’t no carbon copy.

As for the secret behind her on fleek brows, Brems said that she doesn’t do anything. “I seriously just let them be. I sometimes trim them a bit if there’s a stray hair, but other than that I don’t touch them. If you met my father, you’d see where I get them from." Pretty sure, if I just let my brows do their thing, it'll look like I have two small animal pellets on my face.

I can't wait to see more of Brems out on the runways! In the meantime, here are some snippets from Brems' down-to-earth Instagram. You should probably start following her now, because she's definitely going to be the next big thing!