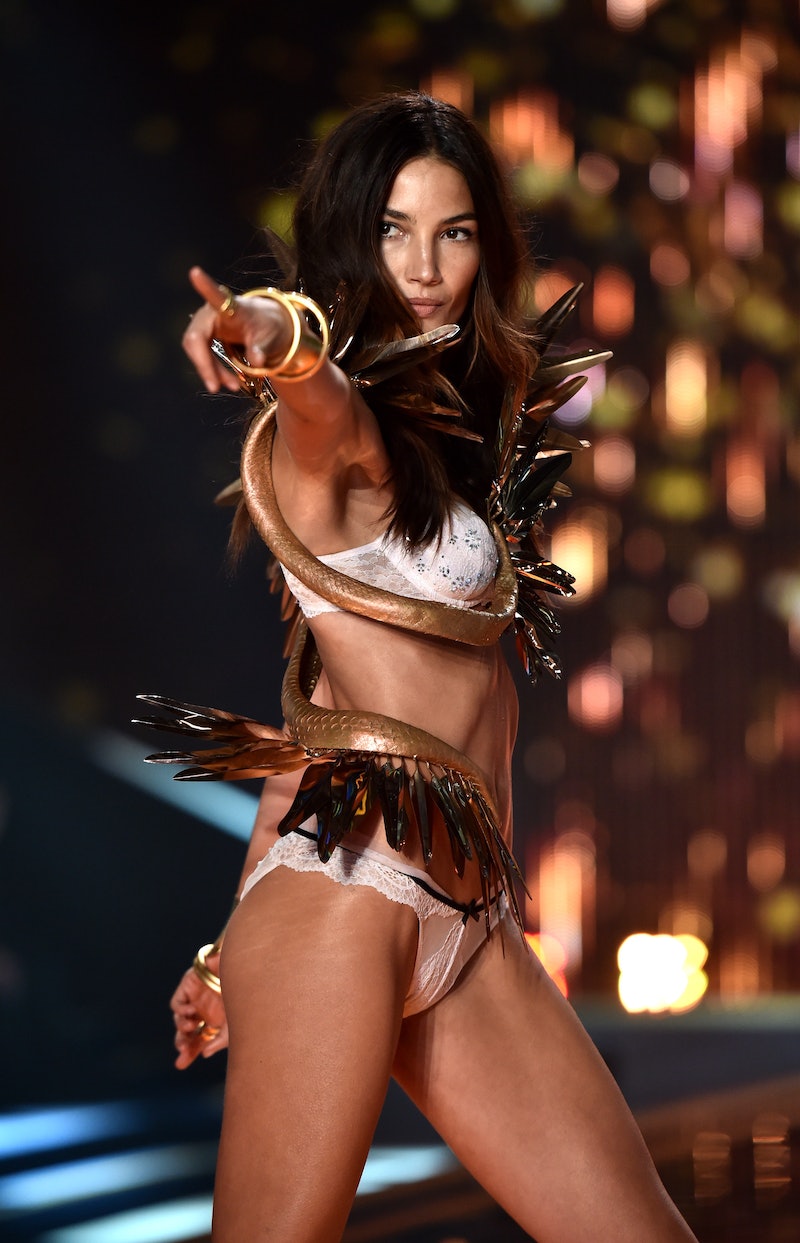 It looks like the revamped Maxim, which now has a female editor-in-chief, is the domain of supermodels. Or, at the very least, it's the new Victoria's Secret catalog, since it's been recruiting Angels for its covers. The first "new issue" of the men's mag featured Candice Swanepoel's face on the cover. Now, the current issue of Maxim features Lily Aldridge in all of her loveliness for April 2015.

It's side profile shot of the model, who is married to a member of Kings of Leon. It sort of reminds me of an album cover from [insert name here] or any American rock band from the '70s, in that Aldridge has flowing, messy brown hair and the cover has a soft, somewhat grainy cast to it. She's also got the minimal makeup trend on lockdown.

The inside shots find Aldridge rocking a bikini, laying topless on a beach in short shorts, covering her boobies with her strategically placed elbows, and doing the impossible, since she makes a pair of high-waisted mom jeans look sexy by being topless, with her sandy spine facing the camera, looking over her shoulder, with the wind in her hair. There's also a shot where her black bikini basically looks like dental floss, highlighting her hard-earned figure.

So it's not a complete change for the mag. The presentation is what's most evolved.

But it sure is artful sexiness, as was the case with the Swanepoel cover. Now that we're two covers in, is Maxim's new approach to hot women... working?

Well, I admit, I looked as soon as it popped up on my screen. I was interested in seeing the cover and inside pics. And as I look at it now, Aldridge has a come hither stare, along with some seriously 'scaped brows. I can see what the mag is doing. If you are a dude, and this issue is in your hands, you see Aldridge and imagine she is looking at you like that.

Overall, it's far less gratuitous and objectifying, but it's also less fun. At least from a straight guy's perspective, which is the vibe I got from two male friends who have been subscribers for awhile and just want to gawk at hot chicks frolicking. Granted, they didn't think too hard about it; that's my job.

Here's my take. The new era of Maxim is on its second issue and there is a clear, consistent vision so far. I'm game to look at the third and fourth and then make a judgment call, since it's a bit too soon to tell, but I can pick up what they are putting down. I'd like to think there are discerning men out there who can appreciate lovely women presented thoughtfully.

I am going to predict that Alessandra Ambrosio is the May cover star, since she's gorgeous and works for Victoria's Secret.