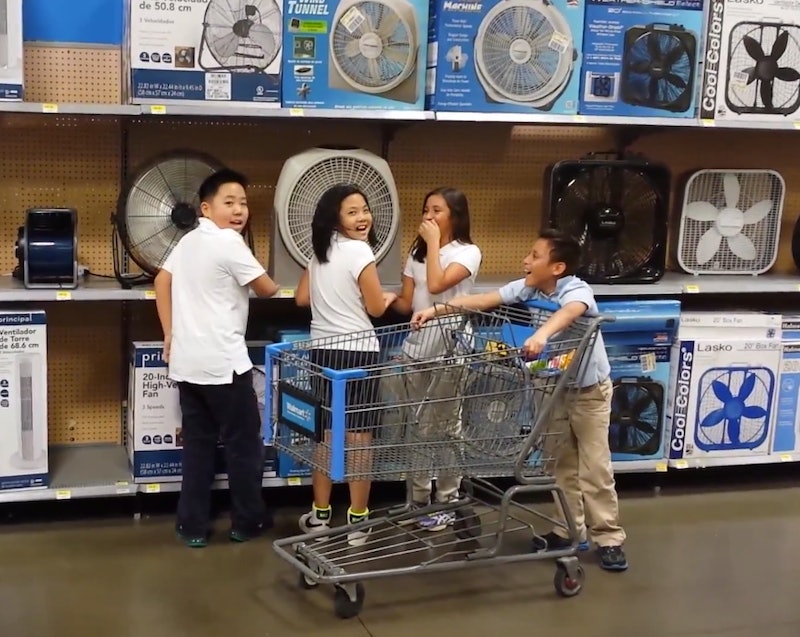 What does the internet always like? Adorable children. Get those adorable children to sing, and you're pretty much on the Monopoly railroad to internet success. I'm guessing that right there was the very valid rationale behind whoever prompted this video of children singing the National Anthem at Walmart, because as adorable as it is, it all seems just a little too adorable to not raise suspicion. Especially when you consider that some random guy just happened to be filming it, and the kids weren't at all freaked out by what they basically told us is a total stranger holding the camera lens (his description of the video is "Heard the national anthem being sung in Walmart. Walked over just in time to catch this!").

Don't get me wrong. They are undeniably precious in their matching uniforms, shoving their heads into the whirring Walmart fans and belting out the anthem with some freestyle riffing that would do Beyoncé proud. But it also seems just a tad convenient, especially considering the bad rap Walmart's been getting lately. Between the general attraction of criminal activity and the dissatisfaction of employees, they haven't exactly won any "Most Charming Retailer Of The Year" awards.

That being said, I could just be the Scrooge of the interwebs, and be 600 percent wrong in my theory. So there are a few scenarios I am willing to entertain here:

1. These kids just got back from singing the national anthem somewhere

Let's be real, most of us did not know the national anthem as kids. Even as a child who lived and breathed for attention and sang the anthem as frequently as someone had the misfortune of handing me a mic, I wasn't totally clear on the words without a lyric sheet in front of me. So maybe they're all matching because they came from a baseball game (Basketball? Football? IDK sports seasons, guys), in which case, OK, maybe they wanted to relive the glory. I'll accept this (maybe).

2. They are Beyoncé's quadruplets from the future

HEAR ME OUT. They used the fans to to travel through time from 2023. That's why they're riffing and totally unperturbed by the random paparazzi filming them in the background (a day in the life, am I right?). If the video guy would just leave them alone, they'd have time to match pitch with Blue Ivy on the other side of the time stream, allowing them to travel BACK to the future from whence they came.

3. "Walmart Idol" is about to premiere on Fox

They're just straight up out of ideas, y'all. This is the only talent industry left to conquer.

Here's the video of the Walmart Warblers, so you can determine the legitimacy for yourself:

More like this
Twitter Is Freaking Out Over Rihanna’s 2023 Super Bowl Halftime Show Announcement
By Stephanie Topacio Long
Behind The Hilarity Of The "POV: You Walk Into My Room" TikTok Trend
By Lexi Inks
TikTok's Butter Board Might Be The New Cheese Plate
By Emma Carey
8 Completely Unserious Tips To Make Your Cuffing Season A Success
By Ginny Hogan
Get Even More From Bustle — Sign Up For The Newsletter