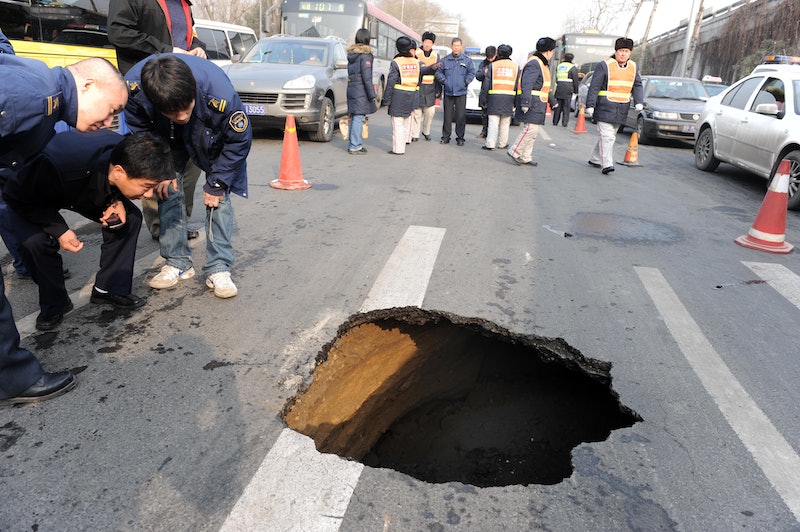 If you think you've ever been angry about anything, guess again. You have not. This man who hates pot holes more than you hate anything is absolutely the angriest anyone has ever been about anything. Driving along what appears to be a country road he is absolutely incensed about the state of the concrete beneath him, which is filled with potholes. His voice is cartoonish and marvelously articulate in its vehement hatred of this poorly kept road. He films the potholes as he drives along, and I must admit, that is really one shitty road. Although I can't imagine being as angry as he is about it. Mildly annoyed, yes, but moved to rant about it? Probably not.

The best part is when he gets out of the car screaming "Worst f**king road in America!" and jumping up and down in the holes as if to, I don't know, kill them? In the caption on the video the YouTube user calls it "ANOTHER MASSACRE OF ROADETRY" [sic] which is a truly extreme way to describe a potholed road. If you're at work, wear headphones to watch the video because the swears are pretty gratuitously used. I mean, this guy is MAD at the road, and the language is definitely NSFW:

Because I'm all for irrational anger at stupid things, here are some more great insults for this guy to hurl at the road beneath him:

1. A simple but melting bitch face

2. Establishing superiority: "Listen up fives, a ten is speaking"

3. The mean girl approach: "So you can go shave your back now"

4. Truth bomb, because it is, you know, a road: "You're a virgin who can't drive" (Roads can't do much accept be there)