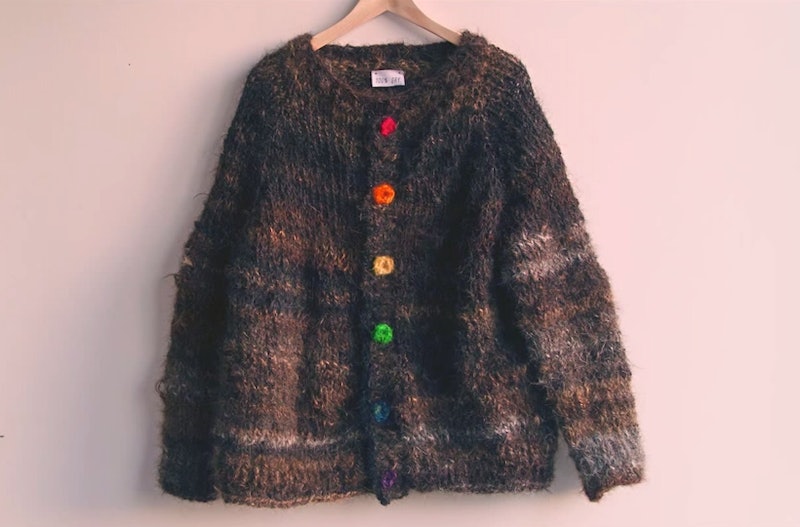 The best fashion is the kind that is used to make a statement, am I right? The Canadian Center for Gender and Sexual Diversity produced a sweater made entirely from human hair, donated exclusively by gay people. Strange as it sounds, there's an amazing message behind it.

Before you get completely grossed out at the thought of touching a garment of real human hair (I admit it is a little gross), think of the important statement that comes attached. According to Metro Canada, founder of Canadian Centre for Gender and Sexual Diversity (CCGSD), Jeremy Dias, says the sweater is "meant to send the message that using “gay” as an insult to things is an insult to gay people." It's true. I bet you can think of at least a few times where you've heard the word "gay" used in a derogatory manner to refer to some object or event. I know I can. People often say "that's so gay" without even realizing it. #TheGaySweater is here to change that.

The point was to make people think about the fact that they're saying "that's so gay," they're also saying gay people are stupid/ugly/lame. It may seem harmless to some, but using the word as a synonym for negative characteristics can be extremely hurtful. Taking a negative use of the word and turning it into a positive message? It's like reverse psychology, and it's pure genius. Although the sweater has been described as “unbelievably itchy”, that's not really the point. It's the thought-provoking aspect of the piece that matters. Hopefully it will make people think twice before uttering "that's so gay" again.

Here is a cool behind the scenes look at the making of the sweater.

More like this
Androgynous Formal Wear That Will Make You Feel *So* Fancy
By Megan Lasher
15% Pledge Director LaToya Williams-Belfort On The Impact Of Supporting Black Business
By Dominique Norman
An Honest Review of MeUndies Boxers, According To A Non-Binary Person
By Megan Lasher
13 Vampy Nail Ideas Perfect For A Moody Manicure
By Jordan Murray
Get Even More From Bustle — Sign Up For The Newsletter