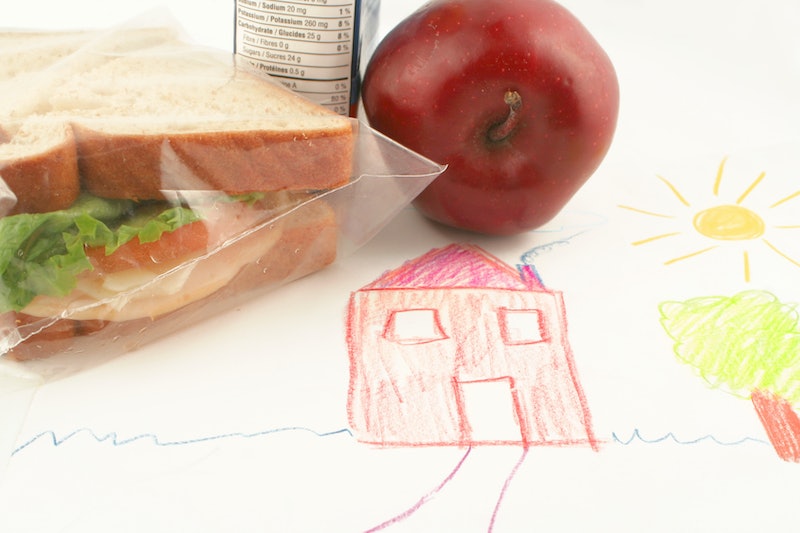 Bagged lunches can seem kind of boring sometimes, especially when you're a kid. But joining the ranks of awesome parents bringing a little excitement to their offsprings' lunches, today we have Brent Almond, creator of the @SuperLunchNotes Instagram account — and you guys? These Post-It note doodles are kind of the best. Just sayin'.

Almond is a graphic designer; he runs the creative studio Design Nut and blogs at Designer Daddy. He and his husband adopted their son JJ when the boy was one year old. Once JJ got old enough for school, Almond struck upon the idea of hiding a note in his son's bagged lunch every day — notes which he's also decided to share with the world via @SuperLunchNotes. I don't know about you, but I'd have been thrilled to find an amazing drawing featuring all my favorite things in my lunch when I was a kid. Heck, I'd still get a kick out of it — you're never too old for fun, right?

According to TODAY.com, Almond sketched the very first Super Lunch Note when JJ, now five, started preschool. “It was a big day for us to send him off to school for the first time,” Almond said. “I wanted to be there with him. I say it was to give him comfort but it was just as much for me, as anything, just to know I was with him in a way.”

The name “Super Lunch Notes” itself came from the original focus of the drawings: Superheroes, which were one of JJ's favorite things at the time. Over the past 19 months, however, the subjects of the drawings have expanded to reflect the boy's growing interests: Star Wars, Disney, video games, Ghostbusters , and more. The doodles themselves have also gotten more and more detailed, although they're still drawn on Post-It notes with markers — and they're still called “Super Lunch Notes.” The name just kind of stuck.

Some of them are messages of love and encouragement:

Some of them reflect whatever JJ has going on that day:

Some of them teach valuable life lessons:

And some of them are just meant to inspire laughter:

This one? Definitely my favorite. No matter how old I get, that joke is still funny.

As for what becomes of the notes after lunchtime? Sometimes JJ gives them to his friends; the rest, he brings home. Almond has kept them all — and I can understand why. How amazing of a keepsake are they? But not just because of the incredible artwork they depict, and not even because of the sheer force of love they represent (although those are both big enough reasons on their own). I think what I like most about them is the way they track whatever is going on in JJ and his family's life. One day, they'll all be able to look back at them and remember the day he lost his first tooth, the day he went on his first field trip — and, of course, the day he started school. It's better than a photo album, and packed with just as many memories.

Check out more over at the @SuperLunchNotes Instagram account — although be warned: Once you start scrolling through them all, you may not be able to stop.

More like this
Behind The Hilarity Of The "POV: You Walk Into My Room" TikTok Trend
By Lexi Inks
Why TikTok Is Flooded With Controversial Videos About "Pick Me Girls"
By Courtney Young
This TikTok Song About An Unrequited Romance Has FYPs In Shambles
By Emma Carey
How To Turn Off Night Mode On Your iPhone Camera
By Emma Carey
Get Even More From Bustle — Sign Up For The Newsletter