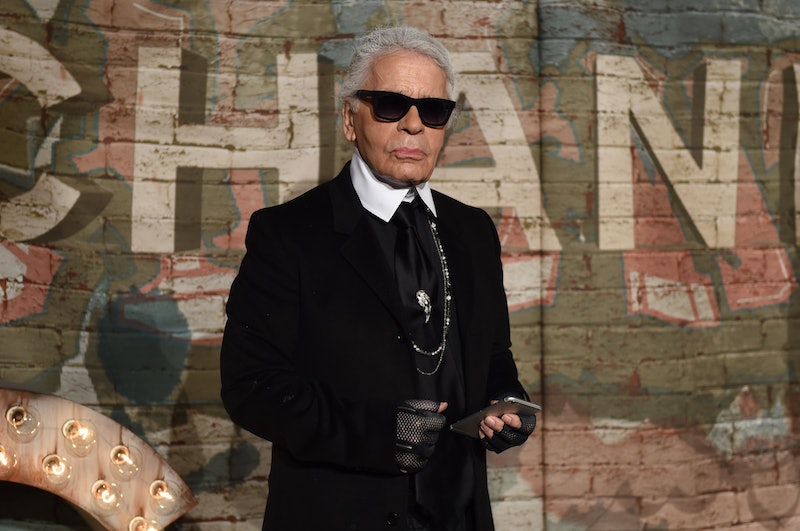 Karl Lagerfeld is one of the most prolific men in fashion. In that light, it's high time Lagerfeld was the recipient of a retrospective all his own. Luckily, the Bundeskunsthalle museum in Bonn, Germany saw this major missing piece in history and were happy to fill it with their new exhibit "Karl Lagerfeld: Modemethode," a fashionable review devoted entirely to the designer. Though little has been heard about this exhibit since it was announced last year, thanks to Vogue International Editor Suzy Menkes' Instagram, the first few images are finally starting to come out.

The exhibit, which will open on March 28, begins with an array of Lagerfeld's famous sketches drawn with Shu Uemura eyeshadows before moving on to 120 of his most iconic designs both for Chanel and the many other legendary fashion houses he's designed for in the past, including Balmain, Patou, Fendi, Chloé, and his eponymous collection. The exhibit will also feature accessories, runway set pieces and music, behind the scenes photographs, press materials, and window dressings. So basically, anything and everything that's come from the hand and the mind of the designer himself. The beauty of Lagerfeld's design ability is the way he can seamlessly translate it to a wide array of aesthetics, finding a happy middle ground where both points of view come through crystal clear.

While Karl's clothes are obviously exceptional, I have to say my favorite part about them is the man who made them. Lagerfeld's eccentric personality has come to be even more legendary than the garments he creates. So, to celebrate the Kaiser's sixty plus years in fashion, I've gathered together six of his greatest moments.

The Invention of the Uniform

Lagerfeld's uniform has become his signature. So much so that whenever he steps outside in even the slightest variation, the world comes to a screeching halt. Though many would assume that his outfit is a protest against losing control of his life via sweatpants, but it's actually a far more practical reason. The pitch black shades worn from day into night? Lagerfeld is actually a bit short-sighted and doesn't like when people remove their glasses telling Vice Australia, "they look like cute little dogs who want to be adopted." The suit is also very intentional. Karl claims he has actively tried to become a caricature of himself, saying, "It is like a mask. And for me the Carnival of Venice is all year long."

Most people probably don't know this, but despite all his fat-shaming directed at young singers and starlets, Lagerfeld was once a big heavier himself. The designer claims he shed 92 pounds in 13 short months all with the help of a Parisian physician around 2004. His diet, to this day, consists of a shake every morning, an ample supply of Diet Coke, only consuming 1000 to 1200 calories, and never ever exercising because it would make him too hungry. While many would assume Karl's weight loss was simply due to being surrounded by rail-thin models all day, it was actually much simpler than that: He wanted to fit into the skinny suits Hedi Slimane had started designing for Dior Homme.

This is the moment Lagerfeld chose to finally let the entire fashion world peek behind his veil of secrecy to expose all of the particulars of his day to day existence, recording 24 hours of his life for Harper's Bazaar. And man, nobody who's read his diary will be able to forget what they learned there anytime soon. Lagerfeld is a man of elaborate eccentricities and rituals and has a dry, curt writing style that makes these peculiarities all the more hilarious. I would say it's the perfect Lagerfeld parody if it hadn't written by the legend himself. The pinnacle comes when Karl gets to dinner time and proclaims he doesn't go out much anymore because, "the people I was going out with are dead or don't exist anymore." Good old Karl, as enigmatic and terrifying as ever.

Said diary also introduced us to the beautiful, beautiful world of Karl's cat, Choupette. This cat is luckier and more spoiled than the majority of human beings on Earth, as only Lagerfeld's pet could be. In the diary we learned that the cat not only has its own iPad, but two dedicated full-time nannies who keep a detailed diary of the animal's behavior and moods throughout the day. If that's not enough to make you green with envy, Choupette also has her own wardrobe of Lagerfeld-designed accessories, a clothing line inspired by her visage, a pillow to sleep on every night and her own chef-prepared food to eat at the table with Lagerfeld every night.

The Karl Barbie is Created

As a designer who's been around the block a few times, how do you know when you've truly made it to icon status? Why, when Mattel turns you into a Barbie, of course! There's something so weirdly enjoyable and funny about seeing Lagerfeld's trademark look shrunk down to doll size. But what is no laughing matter is how many of these dolls Net-a-Porter sold! At a steep $200 per doll, one would think these Barbies wouldn't be flying off the shelves anytime soon. But in testament to the power of the Kaiser, the e-retailer ended up selling roughly $200,000 dollars worth in a matter of days.

This is my all time personal favorite and probably one of the most unknown pieces of Lagerfeld trivia. When Lagerfeld was a young man in Germany who barely looked twice at a swatch of luxurious fabric, he was an amateur bodybuilder. Although it's almost impossible to imagine the designer we know and love today with rippling biceps and hair that is actually a color, thankfully, there is gorgeous, indisputable photographic proof. The craziest thing? He's actually pretty good looking... could Lagerfeld have been the Tom Ford of his day?