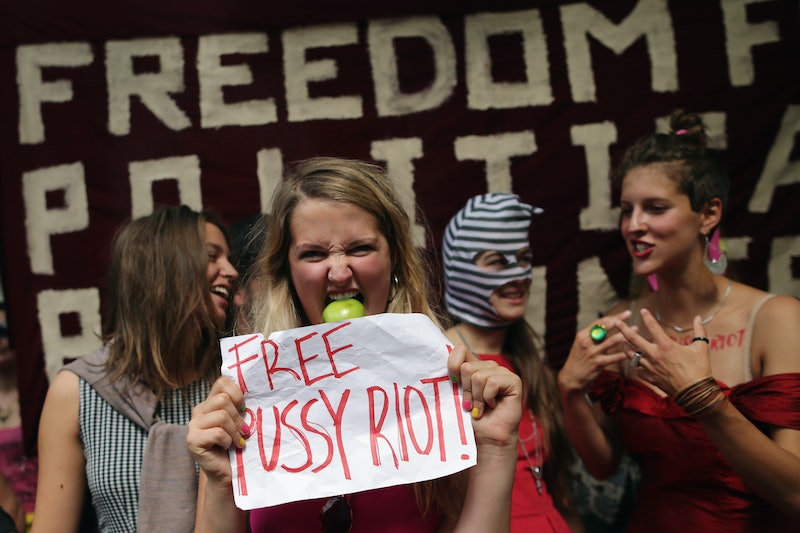 Jailed Pussy Rioter Nadezhda Tolokonnikova is finally getting her way. The awesomely potty-mouthed feminist will be transferred to another prison, authorities announced Friday, after she started on yet another hunger strike. Tolokonnikova had already starved herself nearly to death early this month to protest slave labor-like conditions in the prison and to request a transfer, which authorities promised her when she began to fall ill.

But like many promises made in the Russian prison system, this one was never fulfilled. Neither had promises to investigate the working conditions at her prison, or to ease up on inmates who reported unjust conditions. So on the same day she got out of the hospital, Tolokonnikova went at it again and began another hunger strike. The prison agreed to transfer her, though the location of the new prison hasn’t yet been named.

For the second half of her previous hunger strike, as well as for a few days after it ended, no one on the outside was able to get in touch with Tolokonnikova. Which was troubling, you know, because once someone disappears in the Russian prison system ... well, let's just say that sometimes, they don't reappear. Especially when they've made enemies of prison authorities.

Known colloquially as Nadya, the punk rock feminist singer was serving out her time at one of Russia’s toughest prisons in Mordovia. Not one to keep quiet, she quickly earned the ire of prison authorities when she wrote an open letter exposing the long hours prisoners had to work and the punishments they suffered. She also claimed to have received death threats from officials. As Bustle's reported, here's what she's in jail for:

The 23-year-old Nadezhda Tolokonnikova was arrested after her punk rock group made a brief (40-second, to be precise) unauthorized performance in Moscow's main Orthodox cathedral Christ the Saviour, in which they shouted "Virgin birth-giver of God, become a feminist!" and denounced Russian President Vladamir Putin. Putin, of course, is known as of late for his less-than-tolerant attitude towards gays, protestors, and pretty much anyone who doesn't really agree with him.

Tolokonnikova's lawyer, Dmitry Dinze, told Russian news agencies that she had been moved back to the prison, known by its number, 14, with the use of physical force. In a statement relayed by him, Nadya said that she began her hunger strike at prison number 14 because being there violates her right to personal safety.

But you know, it’s kind of hard to take back a promise to a prisoner when the whole world is watching. Even though it's unlikely that authorities will actually change working conditions in the prison, there's no way they could force Tolokonnikova to stay there.

Tolokonnikova’s friend, and the other remaining jailed Pussy Rioter Maria Alyokhina, had been in the midst of her own appeals process. For many months, Alyokhina had petitioned courts to grant her an early release program from prison to be with her teenage son. Alyokhina's appeals had repeatedly been denied, but she dropped her request Friday after hearing about Tolokonnikova's transfer. Alyokhina is being held in a nicer prison than Tolokonnikova's was, one designed for first-time offenders. The trouble is, though, that Alyokhina's is nearly four times as far away from Moscow as the other one — nearly about 1000 miles — and it has been difficult for her to have visitors.

The Pussy Riot girls just keep proving naysayers wrong. Many predicted the group would fall apart after Yekaterina Samutsevich, who was convicted with Tolokonnikova and Alyokhina, was released on a technicality last year. But the women seem to know who they’re fighting against, and seem to understand that they won’t win without supporting one another.