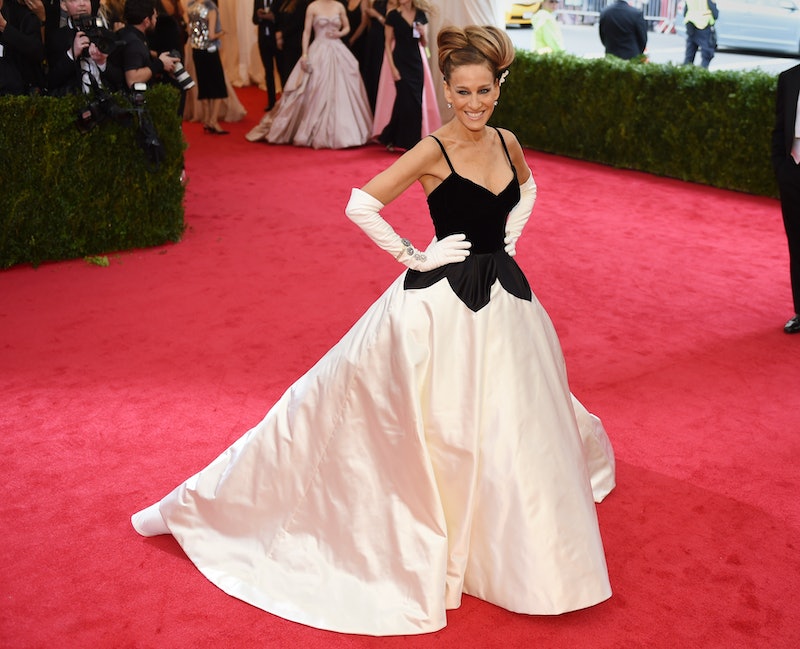 Some celebrity birthdays pass with little fuss and fanfare, but when Sarah Jessica Parker's birthday rolls around each year, the occasion is cause for major celebration. At 50 years old, Parker has enjoyed an illustrious and multifaceted career and shows no signs of losing momentum, which is a blessing for disciples of the luminary's acting career and style alike.

Parker is an inarguably talented actress, but it is the Sex and the City alum's unique manner of melding personal style and performance that truly sets sets her apart from other Hollywood leaders. At 19, Parker popularized unlikely trends including slouchy sweaters and pink leggings when she starred in the 1984 hits Girls Just Wanna Have Fun and Footloose. A mere 14 years later, Parker achieved truly iconic status as she strutted the streets of New York City in sky-high Manolo Blahnik pumps, clutching her Fendi Baguette and sporting crop tops before anyone even thought to expose their midriffs in public while filming the influential and fashion-forward series Sex and the City.

After sporting six seasons and two feature films worth of daring designer garb, Parker delved into design herself by working with Halston Heritage in 2010, and later launched her very own SJP by Sarah Jessica Parker footwear line in 2013. To say Parker is a sartorial prodigy would be a serious understatement. In honor of Sarah Jessica Parker's incredibly chic 50 years of life, here are seven fashion lessons to learn from the reigning queen of experimental style herself.

Few celebrities would be so audacious as to sport a faux hawk-style headpiece or an Oscar de la Renta-signed gown to the Met Ball, but Parker engages in such intrepid feats without blinking an eye. Breaking boundaries is half the fun of fashion, and no one loves to play with eccentric styles more than Parker, often to the delighted applause of critics. Take a cue from Parker and embrace idiosyncrasy.

2. There Is No Age Limit On Style

At 50 years old, Parker sports designs deemed too youthful by other actors in the same age bracket. However, athletic stripes, bold metallics, and voluminous tulle skirts look just as alluring on Parker as they might on a 20-year-old. Whether you're 14 or 59, don't let your age define your style — unless you tend to favor looks that would be better suited to a kindergartener.

3. Manolos Are A Girl's Best Friend

Even after years of sporting heels left Parker with a damaged gait, the actress continued to rock kitten heels in deference to her signature style. Sex and the City famously launched the career of Manolo Blahnik, and with good reason; the designer's classic BB pump is unparalleled in classic, leg-lengthening allure, and Blahnik's variety of other whimsical is a delight for the eye and the foot. When in doubt, pop on a pair of Manolos to transform your ensemble into a truly captivating look.

4. Never Underestimate The Power Of Poise And Posture

Whether clad in a diaphanous ball gown or boyfriend jeans, Parker is a perfect picture of poise. Even the most intricate and ethereal couture confection appears less than lovely when the wearer is cowed and slouching, so take note of Parker's excellent posture and display your ensembles with confidence.

Parker may walk the red carpet in black tie attire on a periodic basis, but the actress and designer knows the power of denim, specifically cropped and cuffed styles. By showcasing a sliver of ankle above her pointy toe pumps, Parker adds unexpected appeal to even the most casual ensembles.

Though Anna Wintour is credited with bringing about the now-ubiquitous high-low trend, Sarah Jessica Parker cemented the style through her character's garb on Sex and the City and her own quotidian ensembles. Parker routinely pairs full tulle skirts with tees, pumps with faded jeans, and designer duds with finds from H&M, demonstrating how multidimensional — and cost-effective — the trend can truly be for adherents.

7. Any Look Can Be Sexy, Even When Minimal Skin Is Bared

Perhaps one of the most significant lessons modern women can learn from Parker's personal style regards how to create a sultry ensemble. The modern inclination is to bear skin in order to create an attractive ensemble, but Parker proves time and again that sartorial seduction is more about one's chosen pieces than the sheer amount of skin on display. Parker often selects one favored asset to showcase in each ensemble instead of placing everything in plain sight. A hint of a collarbone or an inch of midriff is infinitely more contemporarily enticing than an entirely transparent dress. And when in doubt, a nude "Naked Dress" with a faux fur topper is just the ticket.