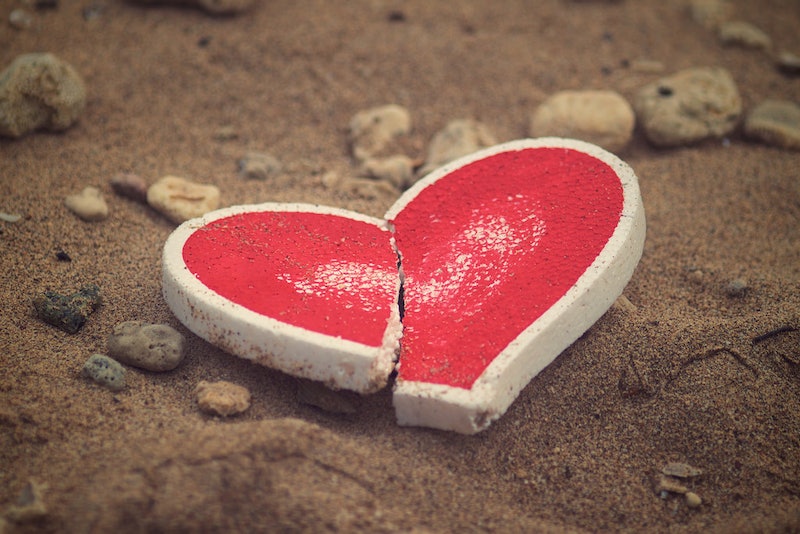 One of the latest trending Twitter hashtags, #MyExIn5Words, implores you to do something you hopefully have already succeeded in managing: Keeping your past history brief. So when I describe a particularly horrible ex with the words "asked me to quit working," you have a decent shake at making a fair and likely accurate assumption of this person. Often, though, the challenge of boiling down a complex human's infinite traits, flaws, victories, and more into a literal handful of words can be quite revealing — especially with former flames and ex-partners. It can help simplify exactly what went wrong, or in less desirable situations, what you are currently missing out on thanks to your own errors, and why life might be more difficult now.

Regardless of why a couple splits, it's highly probable that the ordeal isn't a pleasant one. People often surprise us in really gross ways that leave us reeling — and that's just a universal truth everyone has had the displeasure of living. So instead of reviewing various folks' dating histories and letting the experience send you into a catatonic trance of disgust, let's pull some lessons from it instead. Surely there is an educational component buried beneath the tweets, right? Let's see what we can find to create a solid list of dating dos and don'ts:

1. DON'T: Date anyone who doesn't know how to adult.

SK8R Bois were an appealing option in our teens. Now, though, unless they can carry you across their shoulders while still shredding along, hard pass.

2. DO: Date a person as an accessory.

Sometimes an outfit remains simply lacking until you fix a nice slice of babe to one of your limbs. (Just kidding; don't actually do this. People aren't accessories.)

3. DON'T: Date people who remind you of that played-out Gotye song.

Although I guess it's a good metaphor for a bad ex, since those also have a tendency to pop up when you least expect or want them to.

4. DO: Date people with depth.

'Cuz a flat hue just won't do, whether it's your hair or your personality.

It is clearly dangerous — although I'm a little turned on at the idea of a partner who can and does scoop fresh fish straight from the water regularly.

6. DO: Date someone with basic grammar comprehension.

There is no excuse.

7. DON'T: Be a jerk if your ex goes through some pretty big life changes after you break up.

Disturbingly enough, I found a lot of tweets like this one. Although it might be intended as a hilarious jab, it really only makes the tweeter look like an asshole. Cool joke, bro... in that really not cool kind of way.

We've all been there. Let's never go back.

More like this
30 Clever Ways To Slide Into Your Crush's DMs
By Griffin Wynne, Carolyn Steber and Lexi Inks
Are Quality Time & Gift-Receiving Love Languages Compatible?
By Lexi Inks
10 Ways To Be More Empathetic To Your Partner
By Raven Ishak and Lexi Inks
The 19 Best Tweets & Memes About Bisexual Awareness Week
By Lexi Inks
Get Even More From Bustle — Sign Up For The Newsletter