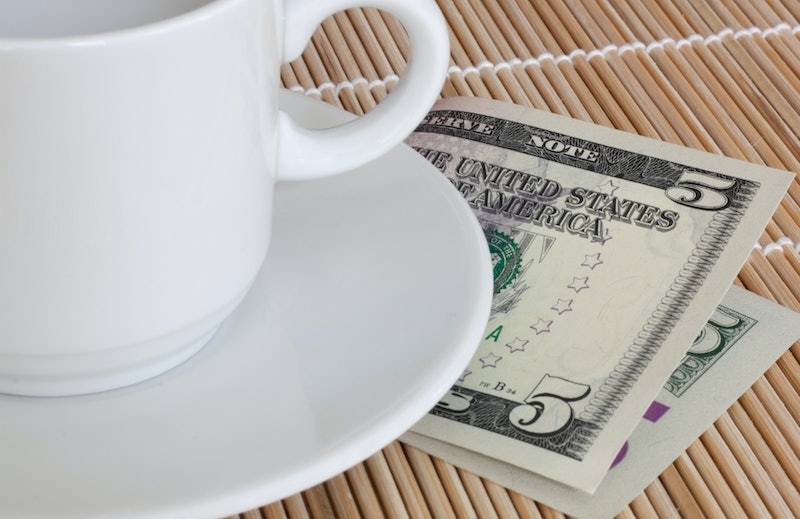 There are a lot of ways to annoy your server, but it's an impressively obnoxious restaurant-goer who manages to accomplish it in a mere handful of words. Need proof? Just look at the currently trending Twitter hashtag #AnnoyYourServerIn5Words. Seriously, you guys. If you've ever waited tables — or even if you haven't — it's guaranteed to make your blood boil.

#AnnoyYourServerIn5Words started up as part of a weekly occurrence known as Tony's Hashtag Game. Run by Twitter user Tony Posnanski and sponsored by The Hashtag Game, it asks Tweeple everywhere to respond to a specific hashtag with their wittiest responses every week starting at 8:30AM on Tuesday morning. This week's topic, however, seems to have struck a real chord for a lot of folks — a full 32 hours later, it's still going strong. I'm not kidding when I say that spending any amount of time reading them will probably make your blood pressure shoot through the roof; all the entries describe the worst possible restaurant patrons. Ugh. Just… ugh.

This isn't to say, by the way, that all the people who submitted the five-word horror stories seen here are guilty of the sins they describe; indeed, most of them probably aren't. I'm willing to bet that the majority of them have either witnessed these stories happening as a bystander, or were on the receiving end of them as a server. Either way, though, there are a huge number of restaurant etiquette lessons we can take away from them — so let's have a look, shall we? The next time you go to a restaurant...

Don't “forget” your wallet, either. I'm all for requiring people who allegedly “left their money in the car” to leave something valuable as collateral while they go fetch it: Their smartphone, for example.

Stop telling me to smile, dammit.

3. DO: Find out what kinds of payment are accepted before you arrive.

Is the restaurant cash-only? Then don't expect to be able to pay with your credit card. And for the love of all that is holy, leave the bitcoins at home. That's just obnoxious.

No. The customer is not always right. There's a word for the kind of customer who thinks they're always right, too: “Asshole.” Don't be an asshole.

Yes. But the cupcakes are not. Consider yourself warned.

Unless you plan on paying your debts and tipping reeeeeeeeeally well. And also not stabbing anyone in the back on your way out the door.

That's not the server's fault; it's your own. Don't penalize your server (or anyone else, for that matter) for something you did.

9. DO: Speak up if something is actually wrong.

Your meal wasn't to your satisfaction? Then say something about it. Your server, the kitchen, and the manager won't know anything is wrong if you don't tell them. The key, though, is to speak up before you finish off the entire plate — otherwise, you're essentially just using it as an excuse to get a discount or a free meal. That's not cool.

If you are this guy, you are officially The Worst.

Prayers are nice, but they won't pay the rent.

12. DON'T: Take up your server's valuable time by making them do something way outside their job description.

It's not your server's job to explain The Dress to you.

13. DO: Be anyone other than LeSean McCoy.

Seriously? You tipped 20 cents? That's worse than no tip at all. That's just insulting.

Watch the hashtag unfold in real time on Twitter: #AnnoyYourServerIn5Words.

More like this
Why TikTok Is Flooded With Controversial Videos About "Pick Me Girls"
By Courtney Young
This TikTok Song About An Unrequited Romance Has FYPs In Shambles
By Emma Carey
The Spiritual Meaning Of Angel Number 000, Explained
By Kristine Fellizar
TikTok's Butter Board Might Be The New Cheese Plate
By Emma Carey
Get Even More From Bustle — Sign Up For The Newsletter