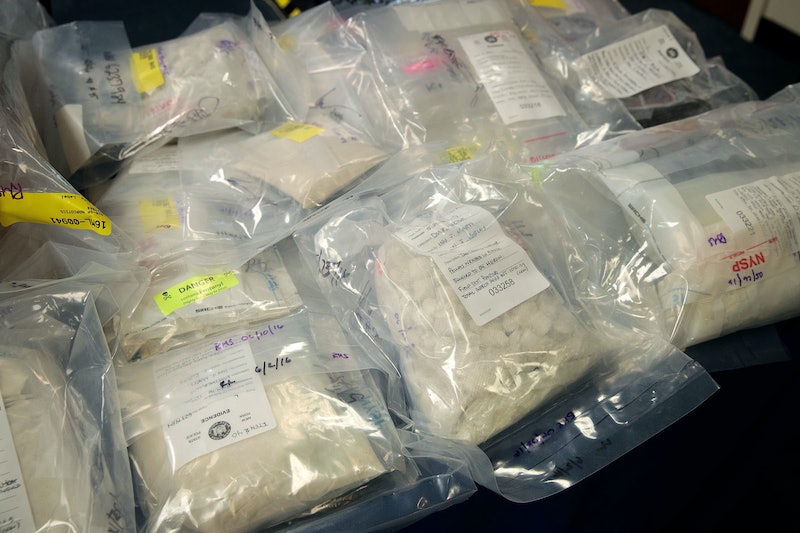 As your parents, members of the clergy, and various talking anthropomorphic cartoon animals taught you while you were growing up, illegal drugs are dangerous. But what they may have not told you is that some of the most notorious illegal drugs in the world — like heroin, cocaine, and methamphetamine — were once not only legal; they were, in fact, key ingredients in many common household products, over-the-counter medicines, and doctor-prescribed health remedies. Plenty of substances that we would now consider hard drugs — to be used only by rock stars in films documenting the perils of fame — were once considered not only wholesome and helpful, but safe for children. Little Johnny keeping you up all night with his coughing? A spoonful of heroin cough syrup will clear him right up! Why, look at little Johnny now! He's not only feeling less congested; he just invented free jazz!

Though it's easy to laugh at a past where people thought drugs that made you pass out or stay up all night counting carpet fibers could possibly be good for you, our societal history of accidentally consuming serious drugs is a bracing reminder of how much we're still learning about how the human brain and body operate. Hell, some of our parents were probably already alive back when cigarettes were considered healthy. Who knows what products we consume with abandon today will horrify our children? Only time will tell (I mean, it's going to be soda, mark my words).

So, in honor of the fact that sometimes it takes us a few tries to get health science right, here are the histories of five serious illegal drugs that were created to make us healthier.

Originally Created As: An anesthetic

Though South Americans had been chewing coca leaves for energy and endurance for centuries, cocaine as we know it didn't exist until 1880, when pharmaceutical companies began marketing a concentrated formula of coca called "cocaine hydrochloride" — a topical surgical anesthetic that just happened to be hundreds of times more stimulating than natural coca.

Cocaine's non-anesthetic properties soon caught on, and the drug — which was considered a harmless "wonder drug" suitable for fixing problems from stomach aches to depression — picked up many devotees, including a young Sigmund Freud. Freud's 1884 work "Uber Coca" was his first major published work, and, in typical cokehead fashion, makes all kinds of wild jumps in logic — like claiming that cocaine can cure alcoholism. Yup, all alcoholics need is a little cocaine to set them straight!

During its heyday around the turn of the twentieth century, cocaine was added to products from coca margarine to coca wine to coca soda. Cocaine was banned for all non-medical use in 1914, but is still used as a surgical anesthetic on occasion, which is probably why your friends who go to med school are so chipper (kidding!)(mostly!)

Originally Created As: A drug to help people sick breathe

Albert Hoffman, the "father of LSD," was just a humble Swiss pharmaceutical scientist looking for a drug that could stimulate the breathing and circulation of sick, emaciated medical patients in 1938, when he accidentally synthesized LSD for the first time. Like a lot of new medicines, it never really went anywhere, and Hoffman shelved it. Five years later, Hoffman dug the drug out and examined it anew, accidentally touching it and thereby becoming the first person to, as pharmaceutical scientists would phrase it, "trip balls." The drug was never marketed as a medicine for extremely sick medical patients, and I think we can all agree that that was pretty lucky.

In 1949, Hoffman's drug company, Sandoz, brought LSD to the U.S., where it was used by researchers to help replicate the effects of mental psychosis in a clinical setting. Throughout the '50s, many American psychoanalysts and thinkers, like Sandy Cohen and Aldous Huxley, believed that LSD could help cure people of their neuroses, deal with difficult memories, or become more creative, and performed their own LSD trials. Dr. Mortimer Hoffman opened an office called the Psychiatric Institute of Beverly Hills in the late '50s, where he sold hits of acid to movie stars like Cary Grant for $100 a pop. Alcoholics Anonymous founder Bill Wilson believed that the drug could induce a spiritual experience that could help addicts and alcoholics get clean, and several researchers reported great success in using LSD to get alcoholics to stop drinking.

Once acid became popular in the youth counterculture in the 1960s, however, it began to raise government hackles; Sandoz stopped manufacturing the drug in 1965, and scientific study of the drug tapered off in the '80s, though some new research into the drug is still being done (no, not at String Cheese Incident concerts).

Originally Created As: A diet aid and anti-sleeping pill

Methamphetamine — the drug that made Walter White a bazillionaire and also ruined bazillions of actual lives — was originally created with the princely aims of helping people stay awake and become skinnier. Whoops! Methamphetamine was first synthesized in Germany in 1893 as a potent amphetamine — a class of drugs used to help people whose jobs required alertness. The drug was widely used by the Axis and Allied troops during World War II to help stay awake; in fact, some historical sources have claimed that Hitler was in a state of meth psychosis, due to his heavy consumption of the drug, for most of the war (which, you gotta admit, makes a lot of sense).

The fact that many soldiers returned home addicted to the stuff didn't keep doctors in the 1950s from widely prescribing it as a diet supplement. If you're into Beat literature or the sad stories of depressed '50s housewives, you may recognize how common meth — referred to as "bennies" — was in the era. The drugs popularity with "outlaw" groups like bikers prompted the government to ban it in the 1970s; this, sadly, did little to keep meth from blossoming into the national public health crisis that it is today.

Originally Created As: Literally nothing

Yes, MDMA — the semi-psychedelic euphoria drug which, depending on your age, you may recall as "X," "E,""molly," or "[cool youth culture name for MDMA that I am too old to know about]" — was created for no reason. Popular myth has MDMA being created by pharmaceutical giant Merck as an appetite suppressant in 1913 — but while Merck did synthesize MDMA in that year, research has shown that it probably had nothing to do with diets. More likely, MDMA was an in-between step in synthesizing a different drug, a sort of "first pancake that you mess up and feed to the dog" of pharmaceuticals. Merck then left the drug to languish on the shelf (are you seeing a pattern here?).

MDMA sat in obscurity until biochemist Alexander Shulgin was introduced to the drug in 1976. Shulgin, who was already experienced with psychedelic drugs, synthesized a new version of the drug, which he and a therapist named Leo Zeff passed on to hundreds of psychotherapists around the country, who used the drug to treat PTSD, as well as severe clinical depression. MDMA was banned in 1985, by an emergency order of the DEA, who felt that street abuse of the drug was getting out of control. And then no one did MDMA ever again!

Originally Created As: A cough medicine.

Heroin was first produced in 1898 as a non-addictive alternative to morphine, which was a common ingredient in painkillers of the time, and considered terribly addictive. We all know how well that worked out, because when was the last time someone mugged you so they could go buy more morphine cough syrup?

Heroin was only legal for a handful of years, but they were busy ones. Bayer — the same company that makes aspirin — held a patent on heroin, and licensed it for inclusion in everything from menstrual cramp remedies to children's cough syrup. And, of course, getting addicts to give up morphine. By 1899, the company was producing one ton of heroin each year.

Bayer and the United States began to realize how badly they had screwed the pooch in 1914, when the drug was converted to prescription-only status; it was outright banned by the FDA in 1924. Over a hundred years later, several hundred thousand Americans are addicted to heroin, but hey, at least we got that coughing thing taken care of, right?

More like this
This Psychological Effect Might Be Keeping You From Hitting Your Goals
By Lexi Inks
These 4 Zodiac Signs Will Be Extra Lucky In October
By Brittany Beringer
5 Ways To Help People Impacted By Hurricane Ian In Cuba & Florida
By Emma Carey
Here’s Your Daily Horoscope For September 29, 2022
By Mecca Woods
Get Even More From Bustle — Sign Up For The Newsletter