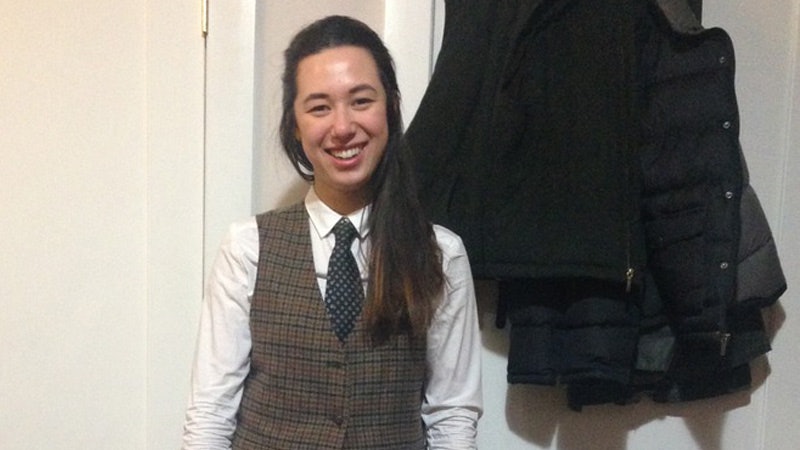 From flowing, boho dresses to bell bottom jeans, the '70s are back in vogue this spring, and in a big way. But when I think of '70s fashion, my mind doesn't wander off to flower children of days past. (That's the '60s, anyway.) I picture Diane Keaton in Woody Allen's seminal 1977 film Annie Hall. She mastered, if not pioneered, the tomboy-chic look we all take for granted today. Keaton's most iconic outfit in that movie, which she wears on the day she meets Allen's character, is a black vest and white collared shirt, paired with slouchy, yet still silhouetting, khaki pants and a blue tie.

It's the tie that really does it for me. A black vest and white collared shirt are not an outfit in and of themselves, but add a tie and it's polished. The tie makes the outfit feel subversive rather than boring, since it's such a traditionally masculine accessory.

Part of the reason that outfit resonates with me is because for years, ties represented the proverbial "World Of Men," an impenetrable fortress where men did masculine things like go on business trips and trade stocks on Wall Street (which my dad did for about 20 years, wearing a suit and tie to work the entire time). I have these weirdly fond memories of standing around the Hermès store in Paris on vacation when I was in middle school, watching my dad judiciously pick out silk ties. Burgundy red with blue crabs? Or how about light pink with tan camels? He was always so particular about which tie would match which shirt, and it felt like a code I would never be able to crack.

Learning how to tie a tie was akin to learning the password that would maybe allow me into this secret clubhouse. Now that I work in an office with a business formal dress code, and live with boys (which is to say, men in their early to mid twenties) who sometimes have to wear suits, ties have lost a bit of their mystique. But they're still an accessory that feels off-limits, especially for me as a woman.

But in Annie Hall, Diane Keaton wears a tie while remaining cooly feminine, and if she can pull it off, who's to say that I can't? Does a tie have to be just for men, or will others judge me, a woman, for wearing such a masculine accessory? In the spirit of the '70s, I wore a tie around New York City for an evening, and here was the reaction.

The first, and probably last, time I wore a tie in public was in seventh grade, when I dressed up like Avril Lavigne for Halloween. Needless to say, that costume did not go over too well with my peers, and I was nervous that this outfit would also be the source of some derision. The white button-up shirt and dress pants are in heavy rotation in my relatively limited work wardrobe, so throwing those on felt totally normal. It was only upon putting on the tie that I felt at all self-conscious, like I was trying on a new, more masculine persona. It felt like a costume, not something I'd wear on a normal day.

But, much to my delight, one of my roommates, a 22-year-old Frenchman from Paris who always looks effortlessly chic even when he's hungover on a Saturday morning and dragging himself out the door to go grocery shopping, said I looked "really nice." And he never makes comments about what I'm wearing. My boyfriend, after he took this picture, also said he liked my outfit, saying I looked nice, and much more feminine than he had imagined, which was comforting because I was also worried that I'd look like a jester.

With that positive feedback from two of the men in my life, I headed to the subway, already feeling a bit more comfortable in unfamiliar territory.

I never understood when men loosen their ties at the end of a long day until I wore a tie on the New York City subway while wearing a heavy winter coat. It was hot, and that tie, when combined with a collared shirt buttoned to the top, was itchy. I got off at Grand Central on my way to that night's event, but first made a pit stop in the women's room at the stationmaster's office. I took off my coat and scarf, and tried to scratch my neck a little bit, but undid my tie in the process.

I started scrambling to tie my tie again. It had taken me quite a few tries to get it right at home, and now, I didn't have time to waste as I was running late for my event. As I repeatedly tried to get the knot high enough and tight enough, a woman washing her hands next to me took note of my struggle. "Don't worry," she said. "You're doing much better than most of the men I know."

I thanked her, took a deep breath, tied a perfect knot, threw on my coat, and went on my way.

I raced from Grand Central to an event about five blocks away, a discussion hosted by Young Professionals in Foreign Policy where we talked with the Romanian Ambassador to the United Nations about women's empowerment. Most of the attendees were women with a few men scattered around the table, but I was the only one wearing a tie in the room. Something about that made me feel more dressed up and proper. The only comment I received that night was from a fellow staff member, who said that she liked my outfit, mentioning the tie specifically. Clearly the Ambassador didn't think it was a problem.

After the foreign policy event was over, I met up with my boyfriend at our neighborhood bar for a quick drink. No one said anything about what I was wearing, which was totally okay by me. By this point, I was feeling my look, as Kim Kardashian would say. It wasn't weird to wear a tie anymore, and I almost forgot I had it on until I went to use the bathroom and looked at myself in the mirror. I drank a beer, and my boyfriend ate a burger, then we walked home, and I loosened my tie and went to sleep.

Wearing a tie was not nearly as gender-bending to the outside world as I thought it was going to be, but I still felt like I was taking a huge fashion risk because it felt so unfamiliar. I didn't feel like anyone was staring at me or judging me based on my outfit, which may have to do with the fact that ties are pretty conventional and conservative accessories. Yes, it's a little different for a woman to be wearing a tie, but the rest of my look was pretty normal. The tie blended in seamlessly, which is probably why it looked so good in Annie Hall.

Really, a tie is the male equivalent of a statement necklace. It's a way to add a pop of interest and color to an otherwise bland outfit, and after this experience, I believe there's no good reason why ties should be gendered. Once I got over my initial insecurity, I felt confident and ready to take on the world, one boardroom, or balcony, at a time.

More like this
Prefer Alcohol-Free Perfumes? Water-Based Fragrances Are On The Rise
By Audrey Noble
12 Absolutely Angelic Cherub Tattoo Designs
By Paris Giles
The Body Shop’s New Range Has More Antioxidants Than Retinol
By Justine Knight
The Velvet Nail Trend Brings Cozy Texture To Your Manis
By Jordan Murray
Get Even More From Bustle — Sign Up For The Newsletter