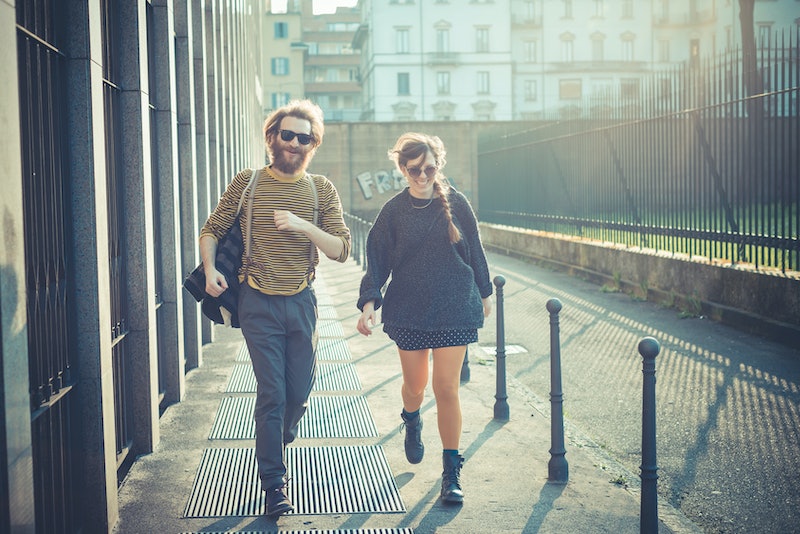 "Alec and I had a really great date," I heard a peppy 20-something-year old girl tell another at party. New to this group of people, I thought there's no better bonding activity than talking about dating. "Oh, who was the guy?" I asked. "My best friend's boyfriend," she said. Yes, you read that correctly. She went on a platonic date to get to know her best friend's significant other.

This wasn't a date-on-the-sly and there was no cheating involved — it was her best friend's idea. It wasn't a product of the Converse-wearing Nicole and the boyfriend in question, Alec, both vying for the girlfriend's attention, or of Alec doing something uncool. True, there are cases of when a friend, like you, doesn't like your friend's boyfriend or girlfriend because he or she: is not a good influence, you feel left behind, your personalities just don't match up, or a thousand other reasons.

In this case, though, Hilary (the BFF), Nicole, and Alec were all supposed to go out to dinner one night, but then Hilary couldn't make it and insisted they still go. She thought that since the three of them often hung out in group situations, Nicole barely had a chance to get to know Alec in a one-on-one setting. What better a way than to go on a date (so to speak)?

A few days after the party, I talked to Nicole about the experience and these were the key takeaways from our conversation and why you should try it, too.

1. It allows you to get closer to your friend's boyfriend or girlfriend — but not too close.

You and your friend's significant other can talk on a whole new level, friend-to-friend. However, not so much that boundaries get blurred and you start texting and talking outside of that dinner without your BFF around. "I didn't dislike him at all, but I really didn't know him that well," Nicole said about Alec, pre-date. "Hilary, my BFF, is a talker and the most extroverted of the three of us, which isn't a problem at all, but Alec and I aren't as talkative."

"The 'date' was great because it was just us and we actually got to know each other on a personal level."

Nicole said they bonded over things like similar tastes in movies, everything that Kevin Smith does, and "bad movies like Rubber (funniest bad movie ever, by the way), and the show Californication," as well as music (Blink-182 and Coheed and Cambria). "It did really seem like what you would do and talk about on a first date with someone — two people who go out to dinner and have a few drinks together," she said.

3. It's laid-back and casual — and who doesn't like that?

Nicole and her date went to Buffalo Wild Wings. "I can't remember who decided, but that place was a staple in our social lives at the time," Nicole said. I agree with Nicole and think the less fancy, the less pressure — just like when going on "real" first dates with potential boyfriends or girlfriends of yours or when you go out with your BFF's guy or girl.

4. It will make the BFF happy, which will make you and her boyfriend or girlfriend happy, too.

Ever since their date, Nicole said now she can hang out with Alec comfortably if Hilary is not around. "I don't think I would be able to invite him out or over without hesitation if we'd never had this experience," Nicole said. "If a few of us are hanging out and Hilary can't join, I always tell Alec he's more than welcome to still come."

5. He or she may turn into your unexpected wingman/wingwoman.

Nicole got a fairytale ending to her date-with-her-BFF's-boyfriend story. "This guy I knew from high school, John, was working at the restaurant we were at, but he wasn't our server. We said hello, how are you, and all that. Then I came home to a Facebook message from him. We've been dating for over two years now." And, not only did Nicole get to know Alec better through their fake date, but he and her boyfriend have become good friends, too.

Nicole said everyone should go on a date with their best friend's boyfriend or girlfriend. "I figured, my best friend loves this guy, they've been together for a while now, I should really get to know him." I agree with Nicole. Do you?

I asked her if she recapped the date for Hilary later on. "She joked a lot about how he and I 'went on a date,' but nothing really more." Nicole also said that Hilary and Alec had been together for two years by that point, so they were secure in their relationship and trusted each other. (And Nicole was single at the time.) "My BFF definitely was not jealous. She knew and knows that we're two people that she can definitely trust. Others may not, but I think they may have bigger issues to deal with. If you can't trust your boyfriend and best friend, who can you trust?"