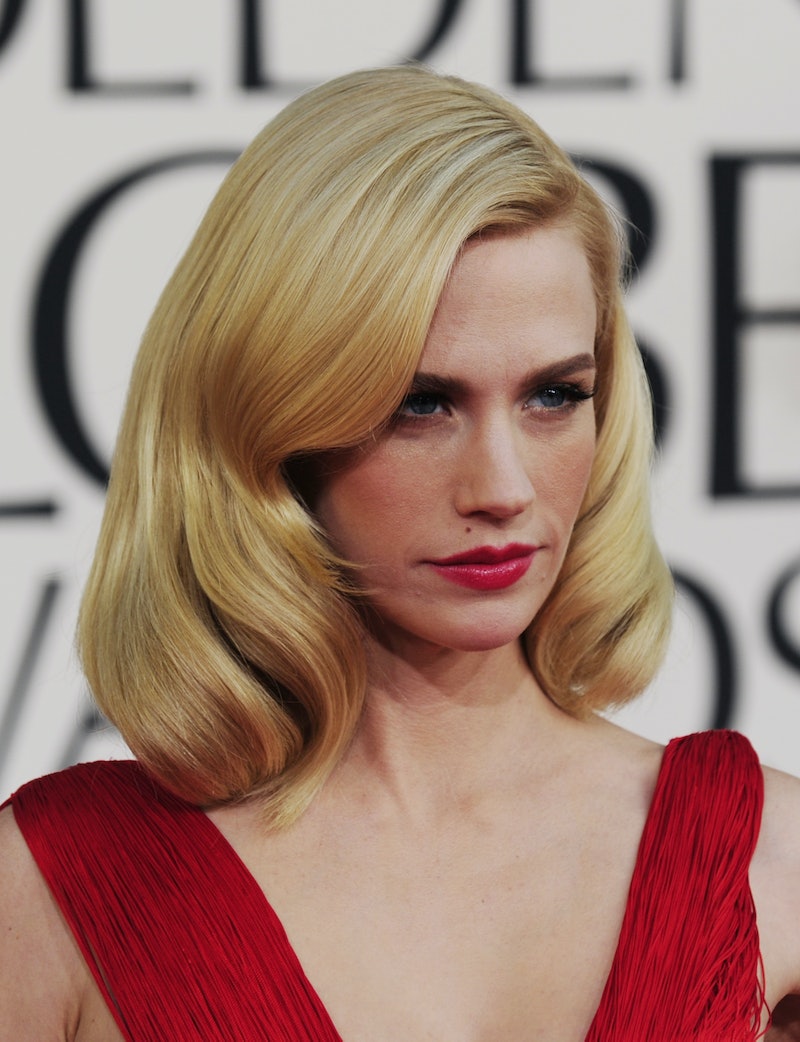 We are used to seeing this actress as an impeccable, perfectly-coifed housewife on Mad Men, so seeing January Jones without makeup on in her latest spread for Violet Grey's The Violet Files is both unexpected and refreshing. The 37-year-old actress transforms herself in a series of six images that showcase how women feel made-up vs. undone.

According to Violet Grey, they couldn't have picked a better subject for the series. Jones explained the inspiration for the series by saying, "We wanted to do an elevated take on before-and-after photos and explore the idea that a lot of women, myself included, feel less vulnerable once they’re dressed and have their makeup on,” she told Violet Grey. “It’s like you’ve put your armor on for the day.”

The images are positioned side-by-side, one picture displaying a more vulnerable Jones while the other displays a more put-together character. My favorite is "Barely-There Beauty"—an image of a topless Jones with little makeup and messy waves juxtaposed next to "The Boss," a stern-looing Jones with a slicked down pony, a blazer,and bold red lips.

“I feel sexy and vulnerable when I have no makeup on,” she told The Violet Files.

Feeling sexy and vulnerable aren't mutually exclusive, though women often think they are. Thanks for setting us straight, January.

Jones worked with her friends to nail all of the looks. Makeup artist Rachel Goodwin and hairstylist Mara Roszak helped her become a "Gym Peacock" and "Gallery Girl" with a side fishtail braid and bold cat eye.

Although there were many different looks in this shoot, one thing's for sure: Jones was not afraid to try any of them. January dyed her hair pink this season, and seemingly red, and then pink again. In this series, she wears wigs to embody her character, something she hinted she may do in real life since her strands have taken a beating from all the style changes.

“It actually wasn’t until I got into high school and started to get quote-unquote pretty that my confidence started to disappear," she said, according to People. "So I want to give the message that girls can be proud and self-assured no matter what funky haircut they have."

You're beautiful and full of wisdom as always, January. We can't wait to watch her on screen for the Mad Men final season, premiering on April 5.