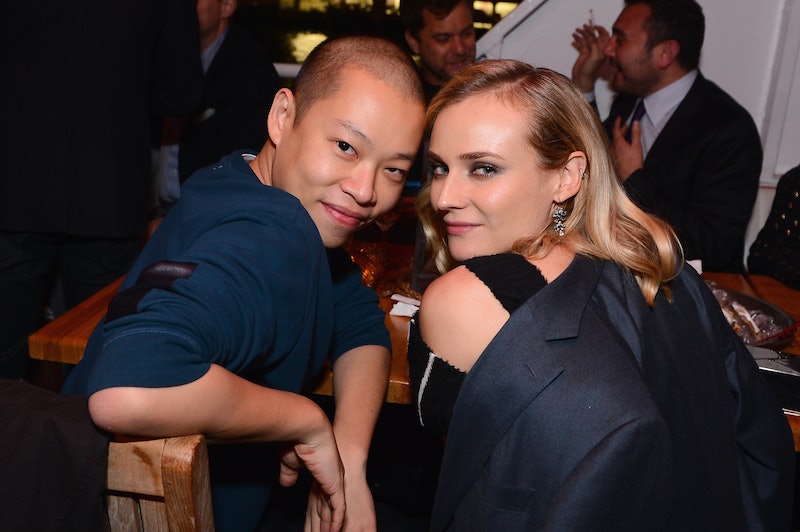 Every great artist has a muse. In the latest from V Magazine, Jason Wu and Diane Kruger talk about their friendship and everything in-between, from champagne parties to Coachella.

In case you don't know, Wu is the iconic fashion designer and art director of German fashion house, Hugo Boss. Diane Kruger is the top fashion-model-turned-actress. They might seem like an unlikely pair with their worlds colliding only on the red carpet. But their best friendship goes beyond awards show: they collaborate on designs, go on vacation together, and even exchange industry advice.

“She’s such a good friend, and I trust her and respect her opinion,” Wu told V Magazine. I rounded up some of the most adorable quotes from their joint interview with V, all of which prove that best friends are everything.

1. On going the extra mile

Kruger requested a dress by Wu for the Cannes film festival, and instead of simply sending it to her, he showed up ready for fittings. "It was so sweet of him. And now, years later, he’s my best friend," she said. Aw.

According to Wu, sometimes normal events with your best friend can get out of hand. "Well, one year, the night before the Met, we and our other halves were going to have a quiet dinner, because I was dressing Diane for the gala. But it turned into…DK: "A 10 bottle…"JW: "Extravaganza!"DK: "And then the Met Gala came around, and we were so hungover."

3. On becoming boss at BOSS

When Wu was approached with a new opportunity, he went straight to his BFF for advice. "I’m really proud of him because I think he’s managed to shake up the house and maintain its core values, which is really hard to do," Kruger said, giving Wu her unending support.

"She understands me and I understand her," Wu said. According to V, the two work together seamlessly to create show stopping looks for Kruger's star appearances.

5. On what makes Wu awesome (according to Kruger)

"Jason really loves classy, confident women who can dress and I love his old-world approach," Kruger said. "It’s refreshing to see that in a young designer. All of his designs scream luxury, but in a very wearable manner. They all have exquisite fabrics and attention to detail. I love the way they make me feel! To me, his clothes are timeless and they’re go-to pieces in my closet. Jason is a wonderful designer and a truly good and fun person. He’s generous to a fault, and if I could, I’d fold him up and put him in my suitcase wherever I go!"

6. On what makes Kruger awesome (according to Wu)

"She’s a woman who’s multifaceted, has a lot of talent, great taste, and a great sense of herself," Wu said. "I think that’s not a quality you always find. She’s obviously beautiful, but her sense of herself is what’s really inspiring. She knows exactly what she wants. There’s no gray area with her."

"We have this annual thing with our other halves," said Wu. "We all go to Coachella. It’s really fun because it’s not about fashion. It’s not about anything we do. It’s just like…"DK: "Silly." JW: "I had never been before and one year Diane was like, “Come!” and I was like, 'Uh, I don’t know…it’s not very me.'" DK: "To be fair, if you knew me well, you would never think I would go to Coachella. But it’s one of those things where once you go, you’re hooked."

Obviously, these two finish each others sentences. Relationship goals, for real. To read more of the V Magazine interview between these two BFFs, visit vmagazine.com

More like this
The 2022 Emmys' Top Nail Trends
By Olivia Rose Ferreiro
How To Wear A Bucket Hat Like Rihanna, Dua Lipa, & More
By Allie Fasanella
Harry Styles’ Red Carpet Looks Have One Thing In Common
By El Hunt
Taylor Swift’s Latest ‘Midnights’ Look Went Heavy On The Glitz
By Allie Fasanella
Get Even More From Bustle — Sign Up For The Newsletter