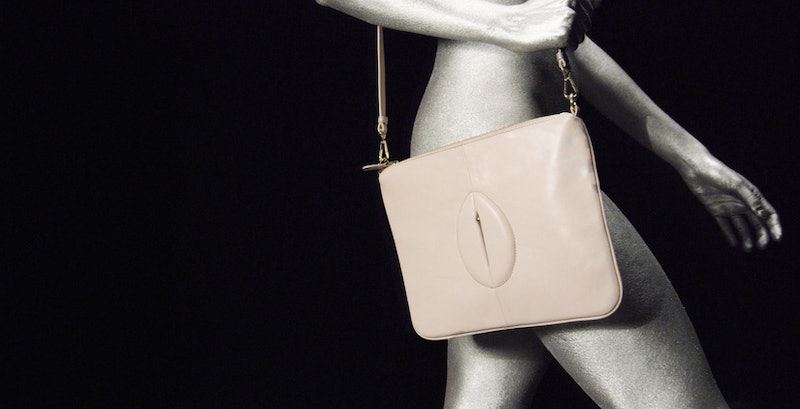 "Pussy Pouch" sounds like a euphemism destined for the tombs of Urban Dictionary, but it’s actually a fashion accessory with a feminist twist. The intimate pale pink clutch resembling a vagina is part of a growing movement that recognizes the contemporary and historical impact fashion has had on transforming social ideologies and institutions. Let’s call it fashion for social change. Fashion is more than pretty clothes, aesthetic and design; it’s a construction of culture rooted in the time and place where it came to fruition — immeasurably influenced by current social values, but also infusing a spark of change into the cultural melee that surrounds it.

I literally stumbled — clumsily — across designer Rachel Feinberg’s cutting edge vagina purse and her company DAMNsel. I was so stunned, which I assume is half the point of such an accessory, that I stared endlessly at a photo of a woman with her legs splayed out provocatively on the ground. Dead center, an oversized pink vulva was flashing at me through my computer screen. I'm pretty open minded, but having never before seen such an explicit fashion accessory (other than a boob beanie), I was admittedly thrown off kilter.

At this point, Feinberg was a recent graduate from Parsons the New School for Art and Design and her website was short on information and only carrying one product: the Pussy Pouch. I try not to think of myself as too vanilla, but it took me 10 minutes to gather the courage to Google “pussy pouch.” I was hooked; as a woman and a writer, I needed to know this story.

The Pussy Pouch was born during lonely rides on the downtown F train of the New York City Metro and was deeply inspired by Feinberg's fellow F train occupants and the feminist text Politics of Reality: Oppression by Marilyn Frye, according to the DAMNsel website.

“Weighted down by three bags and a winter coat, I struggled to remain composed on the jolty New York City Metro,” her website story reads. “As I spotted a vacant seat on the downtown F train, I let out of a sigh of relief. I immediately slithered down and placed my purse on my lap.”

Feinberg goes on to write about how the F train was her laboratory for exploring political and social issues impacting women; specifically the concept of space — who can occupy space and who is expected to move their butt on over. If you’ve ever ridden on the subway, you’ve probably observed the very thing that so inspired Feinberg: male riders lounging around with their legs splayed every which direction and their briefcases strewn about, while female riders cram their bodies and their retinue of belongings into a single seat.

"As I unwound my legs and moved my purse to the vacant seat beside me, I transformed myself from a self-policing inmate of Foucault’s Panopticon to a fashion designer intrigued by the tendencies of the subway’s occupants," her story continues.

Feinberg writes about how women are expected to behave a certain way and how she hopes the Pussy Pouch can change that. The physical posture of women, with their legs crossed or closed tightly and purse in lap (as Feinberg describes) is easily interpreted as a reaction to social pressures asking us to occupy less space. However, there's more to this story. Should we not also consider it an instinctual act of self-defense? The female subway posture she describes strikes me as a posture of fear: Clutching at belongings to keep them from thieving hands and placing them conspicuously as a barrier between the owner and the unknown fellow riders.

The Pussy Pouch, along with her brand new line of other vagina-inspired accessories (in a swath of skin tones and textures), are exemplary of the process by which fashion disturbs our status quo.

Feinberg has hit the nail on the head: The clutch highlights our subconscious assumptions and behaviors and asks both the owner and the observers around her to think consciously about their choices.

I don’t own any designer purses, but if I did, I’d get this one. I like the idea of shoving a vagina, in all its feminist glory, in the face of the public without it actually being my own personal vagina. I'm itching to experience the feeling of carrying around the pussy pouch. I count this as fair warning if I lose all sense of financial reason and a $350 charge shows up on the credit card statement. Of course, I'd be excitedly Instagramming my new purchase from the safety of my bedroom, as it would take me the week-long equivalent of my 10-minute Google pause to leave the house.

It's nerve-wracking to think about confronting gender inequality so blatantly, especially in a small conservative town. One pussy pouch in the midst of 12,000 farmers is a lot more visible than in the sea of urban anonymity. Scary though it may be to hop on a soap box, change only comes when people speak up. I'm not generally provocative by nature, but I think some things do need to be said loudly, with a vagina purse — like, let's just get over our prejudices surrounding femininity already.

Everyone knows you’re a woman when they look at you, there’s no getting around that. Unfortunately, it means your observer has power — they know who you are and expect something as a result. Holding the Pussy Pouch in the lap, in constant awareness of what that means, gives women a chance to speak with actions, “Look at me. I'm a woman and I’m telling you what to expect.”

Haute couture fashion is often characterized as a breeding ground for upper class excess, which is partly due to the fact that many people think fashion is shallow and partly owing to the glitterati flouncing around on social media. When high profile individuals are always decked out in attire so fresh the models paid to wear it have barely stepped off the runway, when Instagram feeds are over-blasted with snapshots of celebs at fashion week, of course fashion is going to seem insignificant and disconnected. Then there are the rest of us, everyday people scrambling to keep abreast of the latest trends — this is the power a fashion designer wields. Brand image promotion and profit-focused design forget the sanctity and transformative potential of artistic expression. An increasingly capitalist approach to fashion fails in this regard.

But, as a rule, fashion design isn't always overtly capitalist and it doesn't always fail to make a statement. Many designers are socially conscious; some strive specifically towards aiming their talent at inequalities and injustices. Feinberg is one of them; she self-described as a fashion designer for social change on her original website.

Feinberg's subversion of norms and her feminist-inspired designs were the attractive power that first enticed me to develop a lingering obsession with a vulva-adorned purse. The Pussy Pouch, along with her brand new line of other vagina-inspired accessories (in a swath of skin tones and textures), are exemplary of the process by which fashion disturbs our status quo.

More like this
Instagram & Facebook May Finally Lift Their Notorious Nudity Ban
By Allie Fasanella
Phoebe Dynevor Serves ‘Bridgerton’ Underboob In Stunning Floral Gown
By El Hunt
24 History-Making Black Women You Probably Didn't Learn About In School
By Ayana Lage and JR Thorpe
25 Inspiring Quotes From Black Women To Celebrate Black History Month
By Kyli Rodriguez-Cayro and JR Thorpe
Get Even More From Bustle — Sign Up For The Newsletter
From hair trends to relationship advice, our daily newsletter has everything you need to sound like a person who’s on TikTok, even if you aren’t.