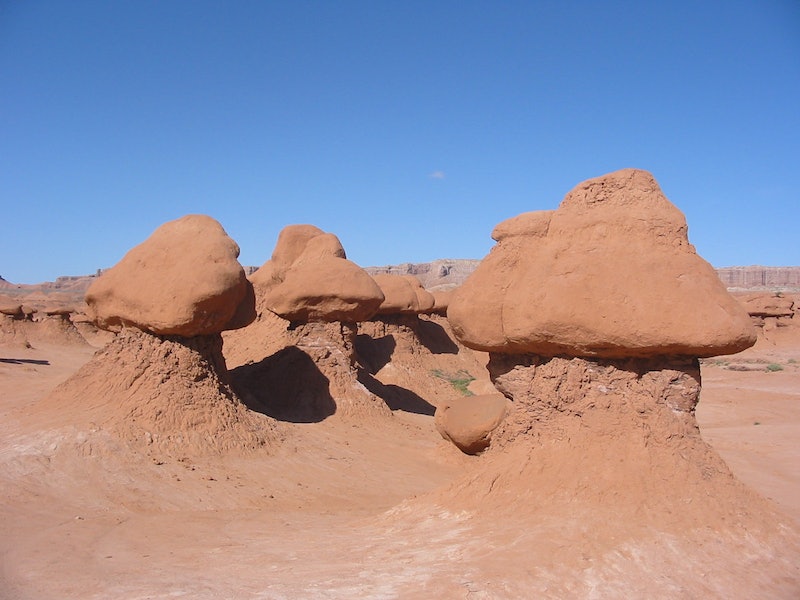 In Utah's Goblin Valley State Park, there once sat an ancient passage of tall, mushroom-shaped rocks. They sat there for an estimated 200 million years, were nicknamed the Goblins, saw a state park built around them, and became a popular tourist attraction. That was until this week, when three hopped-up Boy Scout leaders — Dave Hall, Glenn Taylor, and Dylan Taylor — decided it'd be fun to push one Goblin rock over, and then upload the video to Facebook and YouTube. The three were running a church camping trip at the time, and are now facing the possibility of felony charges, which would, if nothing else, see them kicked out of the Boy Scouts. And maybe Utah, if the state's pissed-off residents are any indication.

Glenn Taylor, the man who pushed over the rock, insists that the action was a civic service. He said that he was protecting his troupe of Boy Scouts: "I put my hand on a rock and it moved," he told a local paper. "While we were sitting right there we thought, ‘Man if this rock falls it'll kill them. I didn't have to push hard." This feels somewhat unlikely, since the rock had been sitting there for all those hundreds of millions of years.

The Boy Scouts of America was quick to condemn the action, even though they thought it was perfectly OK to ban gay Scout members until last May. (Got that? Rocks: good, gay men: bad.) “We are shocked and disappointed by this reprehensible behavior," Scout spokesman Deron Smith said Friday. "The isolated actions of these individuals are absolutely counter to our beliefs and what we teach. We are reviewing this matter and will take appropriate action.”

State officials are very unhappy: "It’s a valley full of these rocks that are perched up on these earth platforms," said the deputy director of Ohio's parks and recreation. "Obviously we’re very concerned and upset that someone would come and destroy this natural wonder that took millions of years to be formed."

Taylor and co stick by their story. "I wish we would have been smart enough to go get a ranger cause it was wrong of us to be vigilantes, and I’m sorry I did that," said Taylor.

The video tells a slightly different story. Initially, Taylor couldn't budge the rock, so his buddy told him to "wiggle it," which forced it over. "We have now modified Goblin Valley," says another man, whilst the third cheers. "A new Goblin Valley exists, with, uh, this boulder down here [at] the bottom."

The state is considering slapping their "vigilantes" with felony charges.