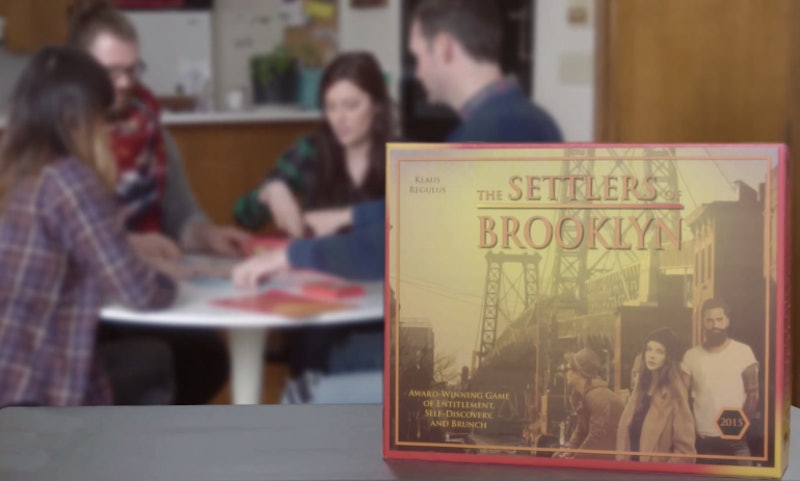 This isn't a joke. Okay, it's a joke, but it's also real life. I mean, you can't really write a joke that's as good as real life, can you? This parody video about a fictional board game, The Settlers of Brooklyn, seems to be a take on games like Settlers of Catan (which I've never played, but I'm assuming the premise and goals are the same), especially considering in this case "Brooklyn" is pronounced "Brook-laan", and asks players to "settle" in Brooklyn. Look, I get it: Brooklyn has hipsters in it. Brooklyn is gentrifying faster than you can say "Orange Mocha Frappuccino". Everyone in Brooklyn likes kale. The joke is good, but isn't it starting to get a bit long in the tooth?

Regardless of the tired subject matter, this video is still pretty funny. The aim of the fictitious game is to "become the first player to create a fully gentrified colony filled used record stores, food trucks, and Urban Outfitters." There are "resource cards" which include "coffee, bicycles, skinny jeans, vinyl, and kale". What have we learned here? That making fun of stereotypes is fun. Although I actually think my favorite part of the whole thing is the hipster in the man bun and check scarf:

Watch an advertisement for the game play out below:

There's also another important lesson here and that's that this particular stereotype is actually on its WAY OUT of Brooklyn. This might be a more relevant joke for Queens (which, to be fair, the game includes a joke "Astoria expansion pack") right now. If you head to somewhere like Williamsburg, you'll see lots of young, Swedish looking families, and fratty finance guys in suits. And a Starbucks. So maybe now the joke is the corporatization of the gentrified area. Here are what I think is better suited to being "resource cards" given the current mood in Brooklyn:

1. Replace "coffee" with "weird carmel flavored thing with a fist full of whipped cream on it from a coffee chain"

Yeah, that's the new Brooklyn I'm starting to get to know!