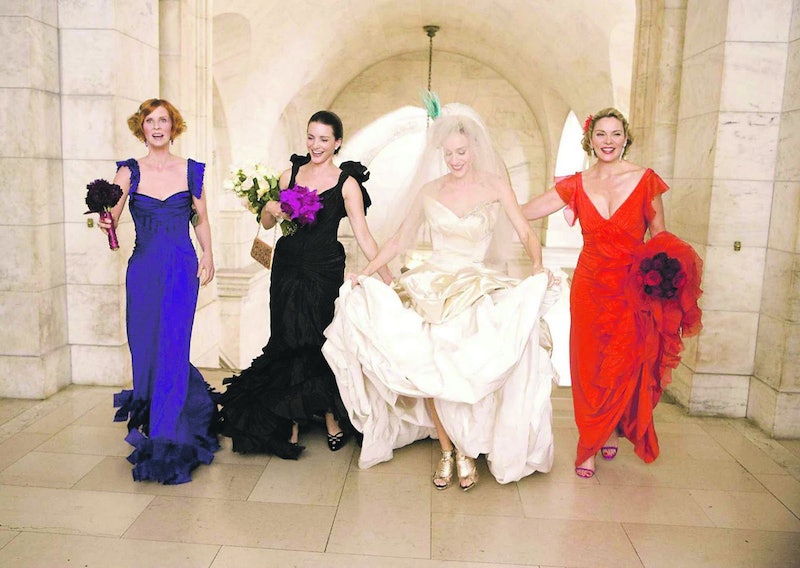 When I was 11, I had a pretty good idea of what my wedding would look like. It would be at The Plaza, of course, my bridesmaids would be in purple, and the music would be supplied by Nirvana. I couldn’t imagine anyone other than Kurt Cobain who could properly sing “About a Girl,” so obviously, he'd have to be there too. At the time, I was unsure how I would find the money to fulfill such an extravagant vision of the big day, but considering I was quite certain I’d be a wildly successful writer by the time I hit 25, I wasn’t too concerned.

But then Kurt Cobain died, I got over the color purple, and somewhere around college I decided marriage was for other people, definitely not for me. (Oh, and by the way, when I did change my mind and decided to walk down the aisle some 20 years later, it was in Paris, far from The Plaza; my bridesmaids were in Tiffany blue and yellow, and Nirvana blared from an iPod instead of live from a stage. It wasn’t quite what I pictured, but I definitely can’t complain.)

Lots of us, whether we have a desire to get married or not, tend to have a somewhat clear picture in our heads as to what we'd want our wedding day to look like, (even if we don't want to admit it). Blame fairytales and Pinterest, but the fact of the matter is, you know you've probably thought about it.

So we asked Bustle readers how their big day looks in their head, and here’s what 16 of them had to say.

"An extravagant celebration of my marriage to a very old and very rich man who could die at any moment! I want big hair, a big, probably red, dress and ridiculous floral arrangements."

"My dream wedding is a giant, relaxed party where the food and drink are plentiful. Everyone ends up taking off their shoes, and later, jumping into the nearest pool or pond. Also, lots of people will fall in love, again or for the first time. And I'll be wearing a long-sleeved satin gown the whole time. Beyond that, details TBD."

"Giant, anything-goes party with hors-d'oeuvres, somewhere crazy in NYC (like a cemetery), kicked off with a three minute ceremony MC'd by RuPaul. I'm serious."

"I just want an huge neon sign in the shape of a heart with our initials inside it to be the backdrop at the altar."

"Embarrassingly enough, I have a Pinterest board. (Please note I'm recently single from a nine-year relationship and can't bring myself to delete it.)

I envision an intimate garden party, under the sunshine and into the wee hours of the morning, under the starlight. I'm not religious, so I'd like it to be an expression of our love, commitment, and a celebration of our past and future together. Plus, I plan to throw a mean party with great music, delicious food, and flowing libations."

"When I was dating my first boyfriend in college my roommate said she could see us getting married on a beach: very informal and me barefoot in the sand. And I thought, yeah, that would be nice, I wouldn't want anything too crazy ... just outdoors, a few family and friends, maybe next to the water or on a mountain.

I wound up marrying that boyfriend five years later ... and it was outside, relaxed, fairly informal, and in his parents' yard."

Lots of different kinds of music ... with traditional Cambodian wedding music, Cambodian rock-n-roll of the 1950s thru the 1970s, and the soundtrack to Amelie comprising the core of the playlist."

"I've always been extremely fond of the 'fall' wedding at the end of Robin Hood: Prince of Thieves. Not sure it would work, but always been fond of the muted colors and setting."

"Drawing on my typical catering hall Bat Mitzvah in the early '90s — MC and dancers included — I knew I wanted something just the opposite of that."

"I was never 'that girl' until I gave in to Pinterest a couple of years ago. And then I couldn't be stopped. It will be outside, much to my mother's dismay. I'll wear a long dress; bridesmaids wear short dresses. I am a Christian, so I would like there to be a Gospel presentation and an invitation for others to accept Jesus into their hearts.

Heavy hors-d'oeuvres with a TON of dessert; that's the most important part … and dancing! I don't want it to be expensive at all. At the end of the day, I'm marrying my best friend and that's all that matters, so I hope to DIY many things."

"When I was a kid, I was pretty convinced that I'd get married in some huge church Catholic church ― I'm not even Catholic ― with a Princess Diana style train. I remember my mother raving about that dress years after the actual wedding, and I think it just got stuck in my head.

Now though, my boyfriend and I are seriously considering eloping and having a huge party or just throwing an 'engagement party' that's going to be our ceremony because family drama is real y'all!"

"I would really like to do a very private destination wedding in either Paris or Tahiti. I've always pictured having a really simple ceremony and none of the wedding hype stuff or even a reception ― I'd rather just spend the night with my partner. I would want to wear an emerald green dress because it's my favorite color and I don't believe in the purity BS behind wearing white."

"I wanted it outdoors, burgundy and gold in the fall, with gorgeous foliage ... and then that didn't happen at either wedding."

"I've always imagined rain on my wedding day ― there's something so lovely about a wedding in the rain, it's like celebrating your love through imperfections and unpredictability. I would get married at city hall in a red dress with flat, comfortable shoes. This would be followed by a small dinner somewhere with close friends and good food and plenty of alcohol and dancing.

My boyfriend, however, wants a lavish church wedding and me in a white gown, so I'll probably do that. In the end it's not about the dress or the location, so whoever cares the most gets to decide."

"[I always wanted] somewhere cool. I'm still jealous of the friend who got married at CBGB."