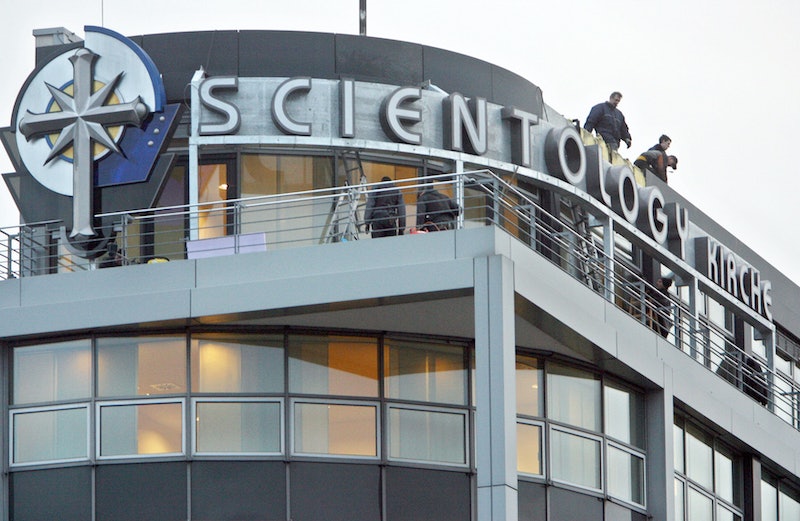 I consider myself someone who knows more than the average person about the Church of Scientology. I was a religious studies major in college and even took a class on new religious movements that spent a lot of time focused on Scientology. I've actually read all of Dianetics, the first and most important of L Ron Hubbard's Scientology texts. But when it comes to the modern state of the Church of Scientology, there were lots of claims in HBO's Going Clear documentary that I had never heard. And most of them were pretty scary.

Scientology is still a very young religion, even compared to other new religious movements — after all, when you're talking about religion, your time frame is often centuries, not decades. Still, in the short time that it's been around, Scientology has gained a lot of notoriety. If this documentary is to be believed, the Church of Scientology allegedly abuses its immense power and influence over its members in ways that seem downright diabolical. Because although reading Scientologist theology can be confusing, hearing about the supposed practices of the modern church is downright terrifying.

Though the documentary is full of shocking moments, here are the five most disturbing claims it makes about Scientology. (The Church of Scientology, for its part, released the following statement about the documentary: "The accusations made in the film are entirely false and alleged without ever asking the Church.")

At least, if the HBO documentary is to be believed. My impression of L Ron Hubbard, the founder of Scientology, was that he was an opportunistic but also deeply troubled individual. This obviously doesn't excuse any of the awful and abusive things he allegedly did — such as beating his second wife Sara Northrup and exploiting his followers for free labor — but still, he seemed like someone who needed to believe in Scientology as much as his followers did, someone in need of help who instead turned to his very active imagination. But it is still saying a lot when I tell you that this documentary paints Hubbard as downright cuddly compared to his successor, David Miscavige.

If this documentary is accurate, Miscavige has allegedly managed to consolidate power within the church to the point that he has essentially achieved total control. And as one might imagine, that power can go to a person's head. The documentary is full of ex-Scientologists' descriptions of Miscavige's alleged misdeeds, from tapping phones to physical assault. (The Church has denied any accusations of physical assault by Miscavige in the past.) And by the end, he comes off looking more abusive and power-mad than even L Ron Hubbard, to the point of being downright cruel, to viewers.

Since the early days of the Church of Scientology, the most dedicated members have supposedly tried to join something called Sea Org, which is the name of a sect of the most devoted members of the church, with participants signing a "billion year contract" pledging allegiance to the religion. Less well known, however, is the Cadet Org, which the doc claims was an organization intended to raise the children of Sea Org members so that the children wouldn't "distract" their parents from their work. According to the account of one Sea Org member whose baby daughter was in the Cadet Org, not only were the children horribly neglected, but trying to reclaim her daughter from the Cadet Org basically required "kidnapping" her from a facility in Southern California, since it seems parents were allegedly not even allowed to remove their own children without official approval.

Although the Cadet Org has apparently been since disbanded, the idea of someone refusing to give you back your child has to be one of the scariest things ever.

One of the main things Scientologists are supposed to do is attend auditing sessions, a process that's kind of like therapy, but at which you hold onto an "E-Meter" that helps the auditor identify harmful subconscious thoughts or engrams that your brain is holding onto so that they can help you get rid of them. As you can imagine, since these sessions are a lot like therapy, a lot of intensely personal stuff comes out in auditing sessions. But unlike therapy (or confession in the Catholic Church), the sessions aren't confidential. The Church allegedly keeps audio and video records of auditing sessions that they can use against people later for whatever reason.

If this is true, it means that if you ever want to leave Scientology — or just not obey the Church's orders — you could theoretically find yourself facing the exposure of every bad or embarrassing thing you've ever done. Or even just the bad or embarrassing things you've daydreamed about; auditing sessions are said to delve into fantasies or daydreams as a way of accessing "past lives."

People might recognize Nazanin Boniadi from her acting career, which includes roles in shows like Scandal and How I Met Your Mother. Going Clear claims that Boniadi is also a former Scientologist who was selected by the Church as a new girlfriend for celebrity Scientologist Tom Cruise in a process that comes across more like human trafficking than like The Bachelor. Boniadi herself does not appear in the documentary and Cruise's lawyers have denied the entire thing (as did the Church, decrying the reports as "hogwash"), but people who were high level officials in the Church at the time insist that Boniadi was selected as Cruise's girlfriend by the Church, and that the orders came from Micavige. In addition, they claim that when the relationship ended, Boniadi was punished after talking to a friend about her hurt feelings by being told to clean a bathroom floor with a toothbrush.

If there is any truth at all to any of this, I've basically become a Boniadi fan for life, because overcoming that kind of mistreatment and going on to build a successful career is damn impressive. And the claim that the Church could treat its non-celebrity members like disposable pawns is horrifying.

Though the allegations about "The Hole" have been swirling around for a while (and the Church has denied them for just as long), the documentary really hammers home just how awful this alleged place is. "The Hole" is said to be located on Scientology's Gold Base, its idyllic headquarters in Southern California. But as the name implies, being put in The Hole is far from idyllic. Scientologists, frequently members of the Sea Org, would allegedly be sent to The Hole supposedly for their own good as a sort of atonement or rehabilitation, but once there would allegedly live in substandard conditions and be subject to psychological torment as well as physical beatings by Miscavige himself, according to former members who were there.

And the scariest part? The fact that former members say that while they were in The Hole, they would have told you that they were there voluntarily and wanted to stay. (Shudder.)