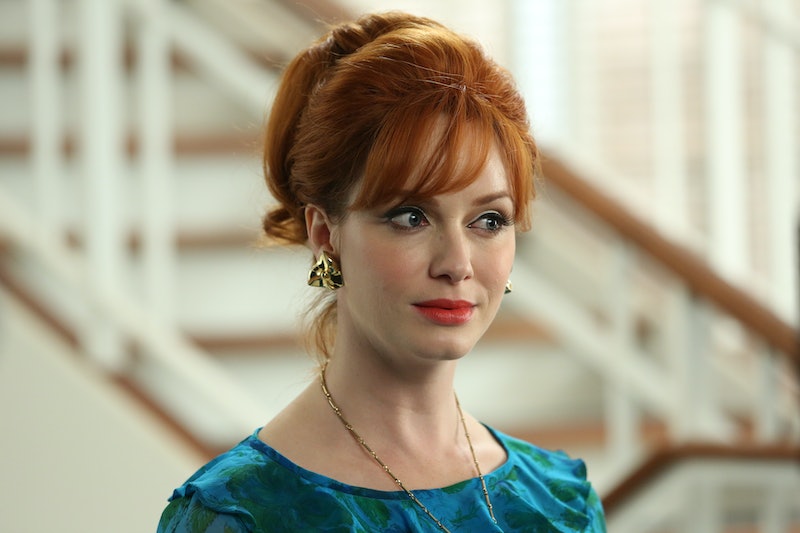 Listen up, Draper fans. Partnering with AMC, Birchbox is releasing Mad Men -themed subscription boxes, just in time for Season 7. I'm not one to casually throw around the term "beauty icon," but after watching Mad Men obsessively for six seasons, I think it's pretty safe to say that Joan, Betty, and Peggy have all made the cut — and surpassed it.

More than beauty icons, these women have become my straight-up role models for how to be a badass and look flawlessly amazing while doing it. So with the premiere of the show's final season quickly approaching, it's about time for even the most beauty-inept among us to master that swinging '60s style in the blink of a false eyelash laden eye.

Whether it's Joan's immaculately winged liner, Betty's perfect red pout, or Peggy's sassy flipped bob, each women has a look all her own and knows how to rock it to the utmost. While I admire these women and their full faces of makeup that just won't quit, I wouldn't even know where to begin to try and replicate some of their best looks. All of my cat eyes seem to turn out lopsided and even the most durable of lipsticks still manages to find its way onto parts of my face I did not apply it to. Luckily, Birchbox has me covered.

With both men's and women's versions, now your bae can get his best Don Draper on, as well (minus the pesky philandering part, obviously)! The men's box features grooming items like Harry's Truman razor, Baxter of California's face scrub and a Declan pocket square. The women's box will provide you with everything you need to make you feel like the new girl in the office again, with products like Cargo blush and a LAQA & Co. lip pencil. And with boxes going for just $10 for new subscribers, that's a deal even the most frugal sixties housewife could get behind.

I've gathered together a few of my favorite beauty look from these gorgeous ladies' that I'll be trying my best, for better or worse, to recreate at home.

Hopefully Birchbox will do me the favor of finding this particular shade of red-blue matte perfection in a tube. Then it will just be all up to me to steady my hand and create a reasonable mouth-shaped outline as opposed to my typical undefined circular swipe of rouge.

Betty always looks just gently flushed and fresh in the way only women in fifties advertisements seem to know how. I'll try to keep her in mind as my muse to save me from achieving an apricot-hued clown face.

When I do a nude lip, somehow I always end up looking like I'm either moments from death or my lips have inexplicably disappeared and melded into the rest of my face. Of course, when human goddess Joan does a nude, it looks timeless and natural. Teach me your ways, Ms. Holloway.

As previously expressed, Joan is the reason Beyoncé wrote the song #Flawless. Her winged liner is always perfectly flicked and totally even. Mine always seems to be a lumpy approximation of a cat-eye shape. Let's hope this one comes with an outline I can trace.

Seriously, I have to know wear Peggy buys her mascara. Her eyelashes are taking center stage in this look, they're long and luxurious, yet still super separated. They're even just ever so slightly clumpy in that cool, bohemian way, not the slept-in, smudgy hungover way I've become accustomed to.

If this is what most women in the world looked like with no makeup on, women would never wear makeup. Let's hope there's some moisturizing foundation in that box so we can all just pretend we woke up one day with Peggy's dewey fresh skin.

More like this
Jecca Blac’s New Brow Drop Was Inspired By Your Fave Drag Queens
By Justine Knight
15 Must-Have September Beauty Launches, According To Our Editors
By Rachel Lapidos
This Week’s New Makeup Releases & More Beauty Headlines
By Audrey Noble
Billie Eilish Teased The Debut Of Her New Fragrance
By Audrey Noble
Get Even More From Bustle — Sign Up For The Newsletter