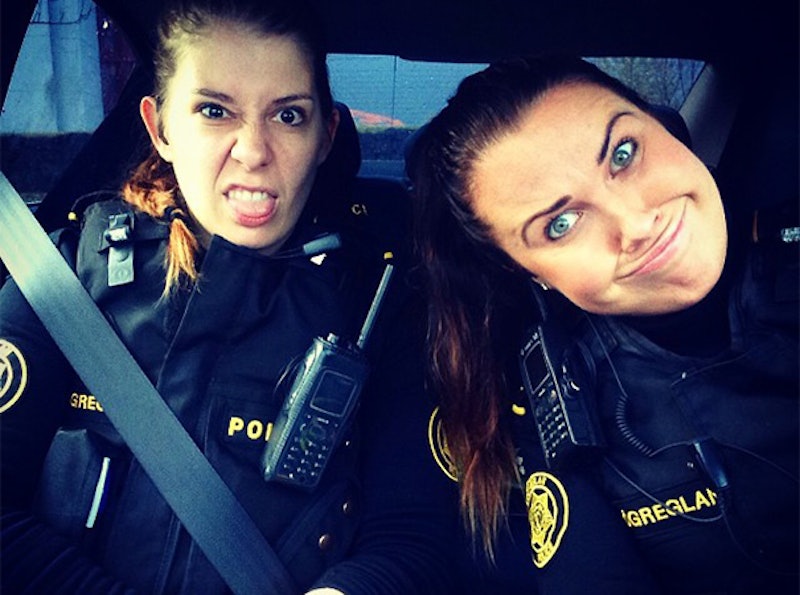 It’s no exaggeration to say that relations between the police and civilians in the United States have been incredibly tense in the last year. A number of high profile police shootings of unarmed civilians, along with the killings of police officers by civilian shooters, has led to an atmosphere of distrust and conflict between Americans and the people assigned to protect us—which is why the unexpectedly cheerful Instagram account of Reykjavik’s police department is both refreshing and sort of surreal.

Reykjavik is the capital of Iceland, boasting a population of just over 118,000 residents. Its police department has an active Instagram account, with images of the city’s officers helping people, feeding animals, and generally having a good time. Photos show the officers posing with adorable things like ducks, small children, parrots, kittens, and Canadians. We also see them participating in their community in positive ways, from helping a stranded driver change a tire to sporting rainbow flags on their motorcycles in support of Reykjavik’s Gay Pride parade.

Why are these officers so happy? It may be because Reykjavik, like Iceland more generally, has one of the lowest violent crime rates in the world. Matt Eliason, writing for Iceland Magazine, reports that Reykjavik averages fewer than two murders a year. In fact, in 2013, the country experienced its first police shooting of a civilian ever. Eliason theorizes that Iceland’s low crime rate is due to a number of factors, including the fact that Iceland does not have a wide gap between classes (the vast majority of Icelanders identify themselves as middle or working class); the nation’s use of hard drugs like cocaine and heroin is very low; and, although Iceland does have a high rate of gun ownership, owning a gun is strictly regulated, requiring a medical assessment and a written exam.

Although we can’t assume that these photos accurately reflect the relationship between the police and civilians—there are assuredly lots of situations that they’re not showing us—the images nevertheless seem to reveal a police force that is welcomed by its community: residents of the city pose happily with the officers, and the officers seem to enjoy helping out where they can. Is it too much to hope for a similar dynamic in American cities?

More like this
Black History Month UK’s 2022 Theme Calls For Action, Not Words
By Maxine Harrison
Chris Kaba's Family Continue Fight For Justice After Viewing Police Bodycam Footage
By Sophie McEvoy
5 Ways To Help People Impacted By Hurricane Ian In Cuba & Florida
By Emma Carey
Chelsea Clinton On The Best Advice She Ever Got From Her Mom
By Brianna Kovan
Get Even More From Bustle — Sign Up For The Newsletter