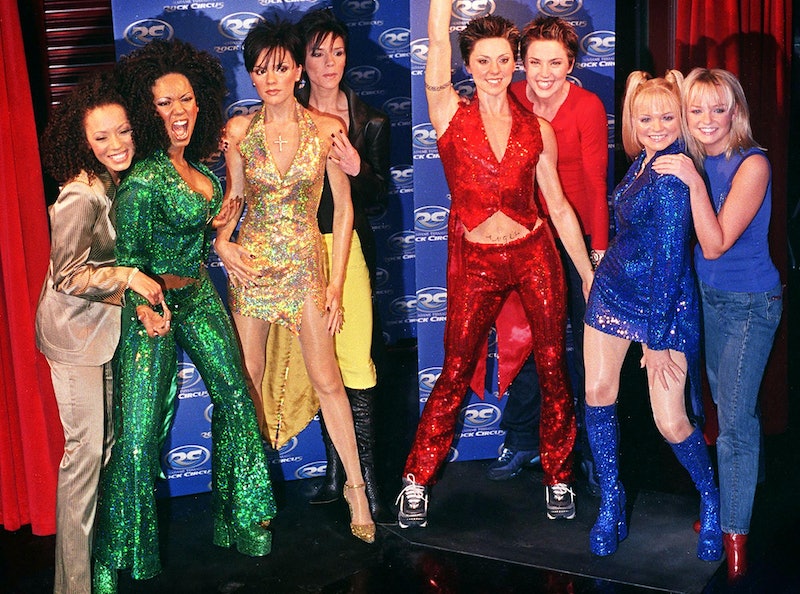 Millennials who feel as though they left their hearts in the '90s are in for some incredibly gratifying news, as Emma Bunton aka Baby spice recently hinted at a Spice Girls band reunion during a March 24 chat with the Daily Star. Bunton insinuated that organizing a Spice Girls 20-year reunion performance is a top priority for all five band members, if only the multitasking mums and businesswomen can settle on a date to accommodate each of their their hectic lifestyles. As there were no artistic differences or longstanding feuds mentioned in Bunton's interviews, it seems probable that fans can expect an live encore of their favorite '90s pop anthems in 2016. Despite the popularity of One Direction's singular hit "What Makes You Beautiful" and Fifth Harmony's much-lauded track "Sledgehammer," no song will live up to the sheer bliss of the Spice Girls seminal hits "Wannabe" and "Stop."

However, it isn't simply the Spice Girls' sound that followers miss from the women power-heralding group. To the truest Spice Girls fans, Scary, Sporty, Baby, Posh, and Ginger's clothing was an equally important facet of the pop experience. What would '90s fashion have been without Baby Spice's ubiquitous babydoll dresses and pastel platform boots, or Sporty Spice's on-point tracksuits? And would the '90s slip dress trend have become as covetable without Posh's ardent support? When the Spice Girls do reunite to harmonize both musically and sartorially, here are the seven '90s trends which I hope make an encore performance.

No self-respecting modern fashion plate would wear platform patent leather go-go boots out the door unless she had a Halloween party to attend, but in 1996 the trend was somehow perfect for the decade. No one rocked platforms like the Spice Girls in their coordinated monochrome ensembles and painstakingly styled cosmetics.

So influential was Posh's signature lace-edged slip dress that I still reach for a simple silk shift when I'm hunting for the ideal low-maintenance date night ensemble. Though Gwyneth Paltrow is also credited with igniting the slip dress trend, it will always be Victoria Beckham's streamlined bob, multi-strap heeled sandals, and nude lip which I associate with the classic ensemble. Perhaps Beckham's Spring 2016 collection will feature a series of bias-cut silk slips for every occasion. One can only hope the trend will return.

Though Baby Spice's choice of the babydoll dress as her sartorial signature is a bit on the nose, irony didn't prevent the trend from overtaking the '90s. As the style is both flattering and simple to throw on in a rush, it seems only fitting for a modern Millennial woman. Or perhaps I've been watching too many Spice Girls music videos.

If you think 2015's crop tops are a challenge for the abdominals, take a trip down memory lane and reacquaint yourself with the Spice Girls-approved crop top. Barely more than a bandeau bra or a bikini, the '90s-era crop top left little torso to the imagination, and was rendered in a rainbow of colors to attract even further attention.

Though Sporty Spice and Scary Spice were most associated with the '90s athleisure track pant trend, Ginger and Baby also enjoyed flirtations with the relaxed style. And with the rebirth of the fitness fashion trend for 2015, I expect at least one of the five chanteuses to step onstage in a pair of striped Adidas sweats — or the Alexander Wang equivalent.

The pantsuit is an oft-resurgent trend, but the pinstriped, monochrome, tuxedo-inspired, and neon-hued models sported by the Spice Girls in the '90s were unparalleled in their creativity. And if Victoria Beckham's recent wardrobe choices are any indication, the band may well step out in a matching tailored set.

Angelina Jolie was not the first celebrity to flaunt a length of leg, despite popular belief. In fact, the Spice Girls wore miniskirts so microscopic they could easily have been mistaken for boy shorts in the mid-'90s. Though a three-inch micro-mini isn't a particularly flattering look for anyone, a sold-hued a-line mini is fabulous for the '90s and now.