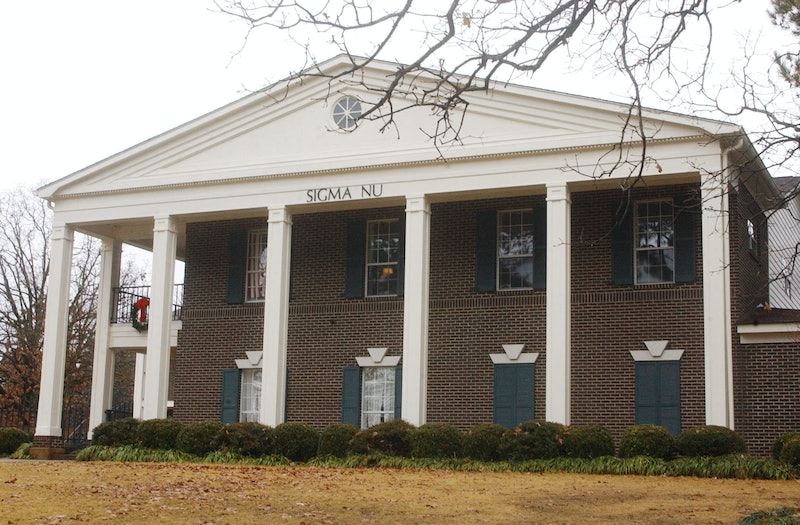 While fraternity life has always conjured up images of privileged white boys playing beer pong, until recently it was never so closely tied — at least publicly — to issues of sexual assault and rape. In the past year, however, college campuses around the country have been under investigation for the way they handle cases of sexual assault and rape, with a staggering number of those cases being tied to fraternities. Of course, rape is not just an issue at schools with Greek life, but Greek life does seem to be a pernicious feature of college life when it comes to rape and rape culture. And adding to the issue now is this: Ostensibly to combat the effects of the Greek life-rape association, a Fraternity & Sorority Political Action Committee, colloquially referred to as FratPAC (that is not a joke, friends), is lobbying to forbid colleges from punishing students who have been accused of rape until a criminal trial has proceeded.

Let's back up for a moment. If FratPAC gets its way, universities will no longer be able to expeditiously investigate issues of rape or assault. Rather, these cases will universally be turned over to the criminal justice department, which is notoriously terrible at dealing with victims. This is why so many rape victims do not choose to criminally prosecute their assailants. A study published by the Department of Justice found that 80 perecent of rape victims who are college students choose not to report their cases to the police. Instead, they turn to their universities to administer some form of justice in expelling their rapists — which, sadly, also often does not happen.

The now famous story of Columbia University senior Emma Sulkowicz comes to mind when talking about universities failing to administer justice. Sulkowicz is carrying around her mattress — the twin XL one she was raped on — in protest of the university's decision not to punish her rapist. She will carry her mattress as a symbol of the weight and shame rape victims have to carry unit her rapist gets expelled (something that seems unlikely to happen at this point).

However, university incompetence aside, the onus is still on schools to protect their students.With the speed at which the backlogged criminal justice system operates, victims would have to walk around on campuses with their perpetrators while the investigation unfolds for (potentially) years, allowing rapists to graduate with degrees before a final ruling is handed down.

Certainly, not all fraternities are breeding grounds for rapists. But maybe, rather than lobbying congress to prohibit universities from conducting investigations that are solely designed to keep students safe and protect victims, fraternities should spend their time reflecting on the structural nature of Greek life that may contribute to an environment where students are unsafe.

More like this
Chris Kaba's Family Continue Fight For Justice After Viewing Police Bodycam Footage
By Sophie McEvoy
Women Around The World Are Cutting Their Hair In Solidarity With Mahsa Amini
By Darshita Goyal
How To Politely Reject Someone Who Keeps Asking You Out
By Laken Howard and Lexi Inks
Constance Wu On Self-Doubt, Family Drama, & Her Sister's Unwavering Support
By Constance Wu
Get Even More From Bustle — Sign Up For The Newsletter