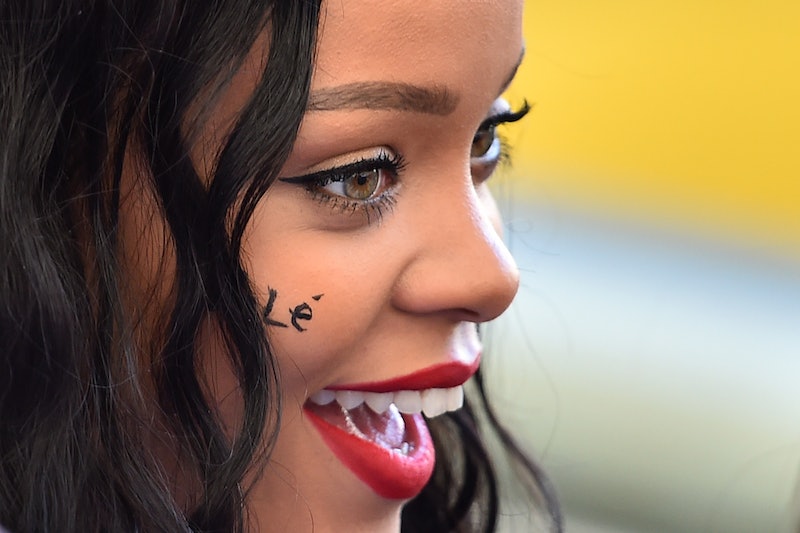 If Kim Kardashian's bare butt can break the Internet, Rihanna's new bold block eyebrows deserve to at least make it pause for a moment or two. The singer/Queen of Edge debuted a pair of seriously on fleek eyebrows with promo material for her new, yet to be released single and they're kind of unbelievably cool.

Rihanna's new brows are dark and heavy, drawn straight across her forehead in a daring rectangular shape that complement those audacious vocals of her's, harmoniously. The look (usually achieved with a daring sweep of charcoal across the brow bone), while still a little crazy for everyday office wear, is no stranger to the runway. The powerful, arch-less look debuted on the strong faces of Celine's models during their spring 2014 runway show and an embellished version made the rounds on the Chanel runways back in 2012, according to Styleite.com. The result is as edgy and badass as Rihanna herself.

It's no secret that Rihanna is constantly undergoing style evolutions since her "Pon de Replay" days, but the girl's eyebrows deserve just as much attention for their eternal on fleek-ness. Don't believe me? Just check out Rihanna's eyebrows through the years to see exactly what I'm talking about.

Back when Rihanna was just baby RiRi, she embodied the early aughts with ultra-thin and perfectly plucked brows.

Those arches, though... Praise be to the makeup artist who achieved those babies.

Back in 2010, Rihanna transitioned her brows over to a more tawny shade to complement and soften her shock of fire engine red locks.

Going back to black, RiRi darkened her brows so they'd be as bold as her cropped, midnight brown hair.

Rihanna kept it on trend, experimenting with the ombre brow look that all the Insta-famous were rocking a year back.

Today, Rihanna is on board with the big and bold brow obsession that is a complete 180 degree shift from her 2005 over plucked baby brows.

More like this
Early 2000s-Era Rhinestone Tattoos Are Back, Baby
By Jordan Murray
The 10 Best Emmys 2022 Makeup Looks
By Paris Giles
Camila Cabello Slayed The Face Gem Trend At Rock In Rio 2022
By Olivia Rose Ferreiro
Tilda Swinton’s Neon Yellow Hair Is More Than A Style Statement
By Justine Knight
Get Even More From Bustle — Sign Up For The Newsletter