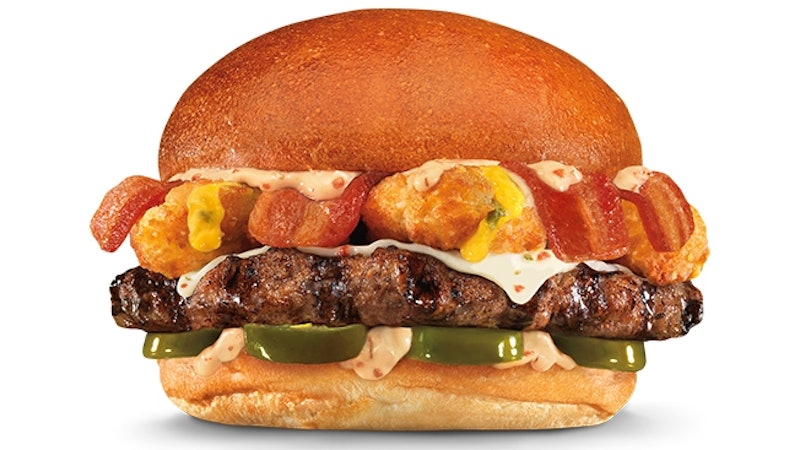 Good news for spicy food lovers: Carl's Jr. and Hardees have just released what they're calling "The World's Hottest Burger," which they have naturally named the Thickburger El Diablo. Aside from the fact that it sounds like it was named by Guy Fieri's rowdy younger brother, the burger actually sounds pretty good (and really spicy). But is it really the world's hottest burger?

The burger is topped with sliced jalapeños, jalapeño poppers, pepper-jack cheese and spicy habanero-bacon sauce, and is intended to appeal to the company's growing population of Hispanic consumers in the Southwest. The problem with this burger is that considering they're billing it as "the world's hottest," we can only expect more horrifically sexist ads a la Audrina Patridge "sexily" eating a Teriyaki Burger (that is, eating a burger while showing off her breasts. Enough with the objectification already, am I right?).

But honestly, a really spicy burger isn't that creative. People have been hawking spicy burgers since the dawn of time (read: I can't confirm this, I only have a tenuous grasp of history). You know what I'd like to try? The world's spiciest oatmeal. Now that would be weird and cool.

Here's are a few other "world's hottest" things I would like to try:

You never get to eat something that's jiggly and spicy at the same time.

How hot can water get before it evaporates? Only one way to find out, guys.

Turn the heat up at your next church gathering or picnic in the '50s.

More like this
10 Pumpkin Recipes That Are Way More Creative Than Pie & Lattes
By Rebecca Deczynski and Alexis Morillo
On TikTok, Tinned Fish Date Night Is The Latest Viral Food Obsession
By Emma Carey
Bennifer, Kravis, & 14 Other Fun Celeb Couples Halloween Costume Ideas
By Emma Carey and Brittany Leitner
Why Harry Styles & Olivia Wilde Make A Great Couple, According To Astrology
By Nina Kahn
Get Even More From Bustle — Sign Up For The Newsletter