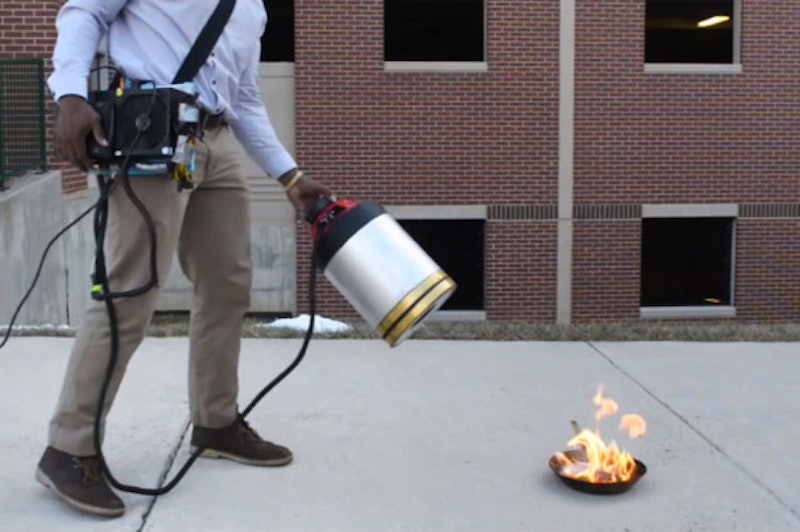 Either I have just seen some of the most miraculous science mine eyes have ever beheld, or the internet has pulled a fast one on me. We all were well-versed as kids in how to put out a fire with water or baking soda or a fire extinguisher if we had one, but I'm guessing none of us were ever told to kill a fire with sound. That is exactly what George Mason students Viet Tran and Seth Robertson sought to accomplish when they invented a device that uses sound waves to put out fire. Their game-changing technology is not only sick to watch, but it could drastically affect our approach to fighting all fires, from the ones as small as your stove or as large as a forest.

Before you start singing at fires and hoping for the best, you should know the very specific reasons why their particular device works. Operating at a low frequency sound range between 30 and 60 hertz, the device separates oxygen from the fire, essentially cutting it off from the very element it feeds off of to grow.

"The pressure wave is going back and forth, and that agitates where the air is. That specific space is enough to keep the fire from reigniting," said Train in a statement to The Washington Post.

Get ready for your jaw to drop when you see how it works:

Not only are the students hoping that it will be the first step into modernizing technology for firefighters, but also in protecting the environment from harmful chemicals that are usually used in putting out large-scale fires. Right now the device has only proven effective against fires that are fueled by rubbing alcohol, but the pair are now working to expand its capabilities to fires started by wood, fabric, or cooking oil.

Look, I've never been much of a pyro, but I'm not gonna lie. I'd set a lot of my personal belongings on fire if I got to use this awesome fire extinguishing robo-gun on them and look as badass as these two do.

Also, petition to call these guys the Fire Busters as their duo superhero name? I don't ask for much, universe. Make this one thing happen for me.

You can learn all about the project in the video George Mason University posted, where Robertson and Tran show how the device works in action: