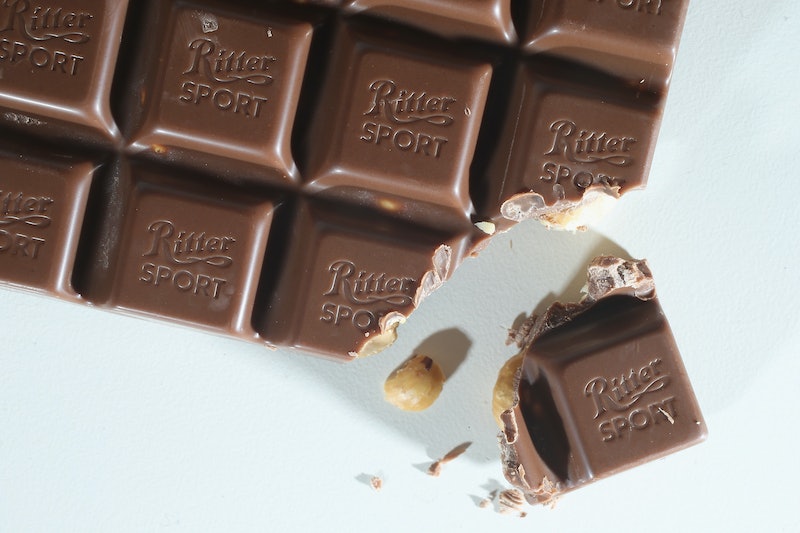 It's pretty common knowledge at this point that chocolate has a ton of health benefits. But is there a way to make chocolate healthier? As it turns out, there might be. Rejoice, cocoa lovers! Obviously you'll still need to limit your intake of the sweet stuff — you can only reap those health benefits if you enjoy it in moderation — but it can't hurt to add an extra nutritional boost to your favorite indulgence, right?

According to research presented at the National Meeting and Exposition of the American Chemical Society this week, changing the way we make chocolate can increase the nutritional benefits in it — or perhaps more accurately, it can help retain the already-existing benefits found in raw cocoa beans as they undergo the chocolate-making process. The trick, of course, was making those changes without affecting the taste of the chocolate itself.

What exactly might cause the chocolate to taste… well, not like chocolate? Screwing with the roasting process. Normally, the first couple of steps of making chocolate go as follows: Harvest the pods from the cocoa tree; split them open and take out the beans; ferment and dry the beans; then roast the beans to bring out the flavor of them. That's how chocolate gets its delicious taste (in addition to the milk and sugar that gets added later on). However, roasting the beans also has an unfortunate side effect: It causes them to lose some of their polyphenols.

Could something be done to the roasting process that might keep the antioxidant levels high while still bringing out the flavor in the beans? Lead researcher Dr. Emanuel Ohene Afoakwa, PhD and his team suspected that adding an additional storage phase might. Here's how they figured it out.

The Afoakwa and his team divided 300 cocoa pods into four groups: One group was stored for three days before being roasted; another for seven; a third for 10; and the last, not at all. They called the technique “pulp preconditioning.” Once the beans had finished the preconditioning process (that is, once they had come out of storage), the researchers took samples from each one and roasted them a few different ways. They always used the same temperature, but the amount of time for which they were roasted varied. Normally cocoa beans are roasted for anywhere between 10 and 20 minutes at 248 to 266 degrees Fahrenheit, but the researchers dropped the temperature to 242 degrees Fahrenheit; they also toyed around with the times.

While We're On the Subject…

I've never studied food science with any degree of seriousness, but although I don't know a heck of a lot about it, I find it fascinating whenever I actually take the time to read up about it (note to self: Make it a point to learn more about food science). Reading this research, I thought it sounded kind of familiar — and guess what? There's a reason for that: The differences between beans that were stored before roasting and beans that weren't echo the differences between raw cacao powder and cocoa powder.

Cacao powder and cocoa powder are more or less interchangeable in most baking recipes (or at least, they are by my experience) — but there's a huge difference in the health benefits you'll get from them. Because cacao powder hasn't been processed the same way as cocoa powder it's actually much more nutritious. Guess why? Yep: Roasting. Cacao powder is made by cold-pressing unroasted cocoa beans, while cocoa powder is raw cacao powder that's been roasted. It's such a shame that roasting cocoa beans makes them taste awesome, but destroys so much of what makes them good for us, isn't it?

But hey, at least science is on the case. Here's hoping that performing the extra storage step doesn't end up being prohibitively expensive in the long run; we could probably reap a lot of benefits from it if it becomes standard industry practice. Again, though: Moderation is key. Eating an entire king-sized bar of chocolate in one sitting isn't going to help you much, no matter how many antioxidants it has it in. Treating yourself to a few squares of it every now and again, though? That sounds divine, does it not?