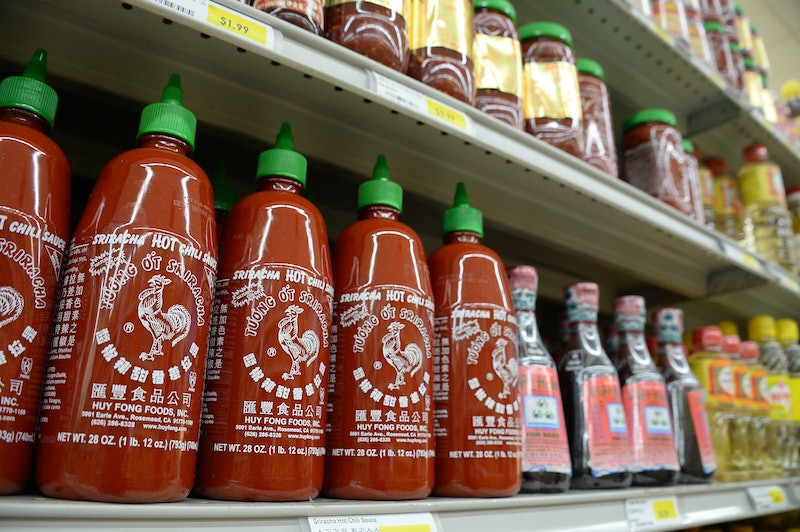 It's life-affirming to acknowledge the newish omnipresence of hot sauce in restaurants. The sweetheart of the hot sauce community — or at least the type inspiring the most intense super fans — is hands down Sriracha. The affinity for this condiment burns so brightly that folks have manufactured handy/adorable Sriracha key-chains. I mean, people got very close to straight-up rioting when rumors surfaced that The Huy Fong Sriracha Factory might close. By the way, could you seriously imagine a world with no rooster sauce? I wonder how much time would pass before someone would produce a similar replacement, or if society would start erecting secret speakeasies doling out what's left of the dwindling supply. It doesn't matter, really, because Huy Fong is still open and going strong. The Huy Fong company is actually doing so well that it's now in the process of developing a Sriracha snack line. As in Huy Fong joined forces with Pop! Gourmet foods to together produce delicious treats made with the actual sauce — none of that imitator malarky.

Sriracha popcorn is already available in stores and may act as a way to sate fans anxious for more. Other Sriracha-infused food to join the menu include potato and corn chips, hummus, and croutons.

It's also working on a dehydrated rendition of the fiery sauce that may be used like any other spice (although infinitely superior as this spice is Sriracha, obvs). I have some suggestions of other foods Huy Fong should consider Sriracha-ing while they're at it:

If these pasta people can squish spinach and other stuff into their dried pasta, how hard could it be to sub that for the godliness of Sriracha?

Plenty of other pickle companies already offer spicy varieties, but it'd be awesome to try the legit route.

This plus french fries would probably be the food equivalent to a real sheet-shredding orgasm. Think about it.

I don't mean those kind of brownies, but since you mentioned it.... But also, hear me out: Mexican hot chocolate is a totally normal thing that marries sweet with a kick. To be able to chew that kind of combination would achieve a life goal of mine.

Kinda shocked this has not happened already.

All of this would probably be best washed down with that Sriracha beer Rogue Ales promised us last fall. Now I'm daydreaming of what kind of legendary, stomach-searing Micheladas you could make with those bad boys. Totally worth the heat, I'd wager. Where are those Sriracha Hot Stouts, btw, Rogue? My body ready.