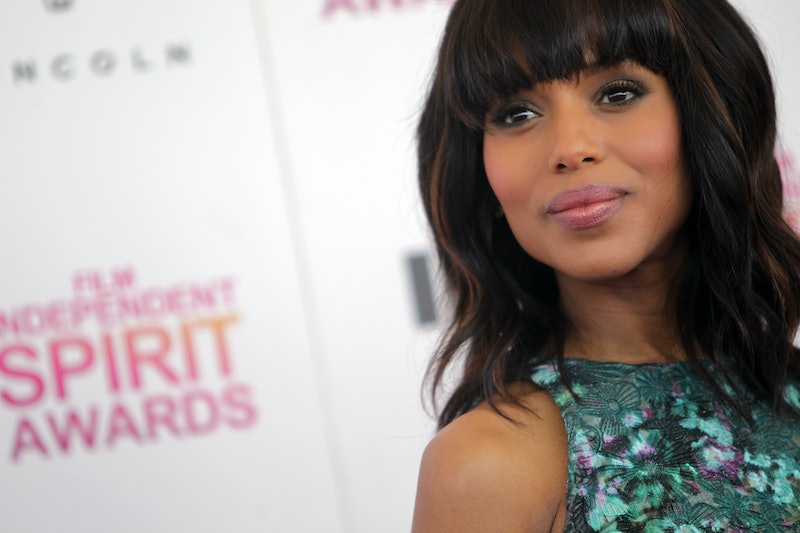 Most of us know Kerry Washington as the infamous crisis manager on Scandal who's kicking ass and taking names. But in real life, she's better known for being smart, talented and oh-so-gorgeous. Case in point: Kerry Washington on the cover of Net-A-Porter's THE EDIT. In her interview, Washington talks live-tweeting before her birth, the fashion on Scandal, and how she truly feels about Olivia Pope.

Clad in Marni, Loewe, the Row, Isabel Marant, and Lanvin, Washington looks absolutely ethereal in all whites and creams, and in jewels by Jennifer Meyer and Shaun Leane (all of which you can shop here). The shoot, which was done by photographer Bjorn Ioos and styled by Tracy Taylor, also featured jewelry that was Kerry's own.

In her interview, Kerry told readers about how she kept her Twitter game strong in the early stages of her labor. That's some dedication! You can't exactly pre-tweet those, like she usually does on Thursday nights when Scandal is on. As for the negativity and flack she receives? Those haters can tweet all they want, cause she's blocked them.

Washington also tells THE EDIT about the fashion on Scandal and how she and costume designer Lyn Paolo strayed away from the all-too-typical and cliché look of ill-fitting suits in Washington. "I think because Lyn had worked on [political shows] like The West Wing before, she really understood the aesthetic of Washington, and I had already been working for the white house for two years when I started this job," she said. The two pulled looks from magazines and the Internet to master Olivia's Head Bitch In Charge look.

And while Pope and Washington have their differences—mainly, she says Olivia would never wear Uggs, but she does on set—she still feels like Olivia is family. And as for Olivia's legacy? "I hope people remember her as a complicated, fully realized human being; she's not a stereotype and she's not an accessory. I think that it's important for women to know, in film and in TV and in real life, that you can be the lead of your own story. I hope she's remembered for that, as somebody who is the driving force of her own life," she told THE EDIT.

This isn't the only cover she's graced lately. Kerry Washington also appeared on Marie Claire and Ebony's April 2015 issues. Guess that's what happens when you're as stylish, beautiful and graceful as Washington.

Check out the full article and spread of photos on THE EDIT.