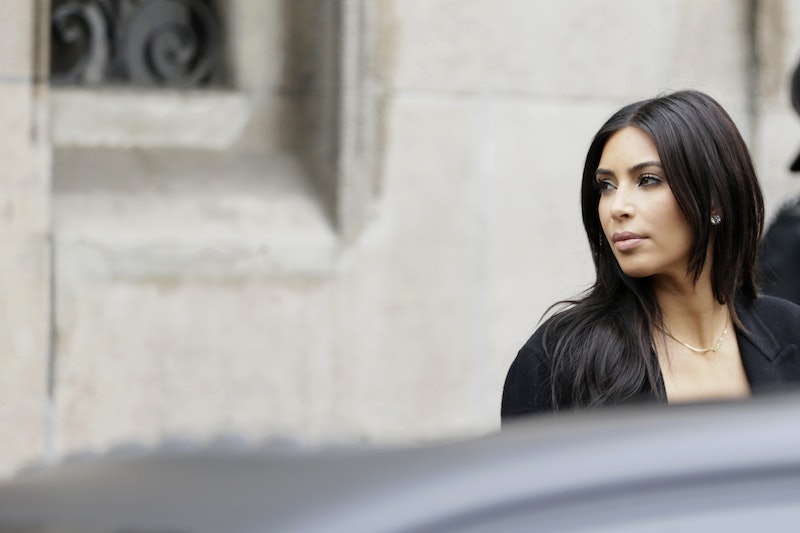 It's official: Kim Kardashian is now a brunette, now that she's lost her blonde locks forever—OK, I'm exaggerating, but I loved them! However, we do have a lasting reminder in Mrs. Kardashian West's cover of Elle France. The stunning cover showcases the beautiful E! star in what seems to be her last look as a platinum blonde, and because she's everyone's favorite member of Instagram, the star gave us some behind the scenes photos that are giving us some serious Daenerys Targaryen vibes.

Kardashian made a splash during Paris Fashion Week when she took her naturally deep brown locks and dyed them straight up platinum. At first, she tried to conceal the drastic change by covering her hair with a beanie, but soon after, the truth came out. Kardashian's locks were met with widespread applause as well as many wondering what made the beauty decide to make such a change. Despite many theories her locks were modeled after Draco Malfoy's, Ms. West revealed Madonna was her inspiration, and she'd been considering the dye job for some time.

Though the gorgeous platinum may be gone for now, at least we still have Kardashian West's cover of Elle France. Kim sports some seriously sexy fashion with a dark jacket slung over her shoulders and a gorgeous frock with a daring cut-out showing her curves. In the spread, the stunner sports some fantastic leather pieces that hearken back to Dany during Game of Thrones Season 1, and we have to say, we are loving it! She may be back to her old self, but at least Kardashian went out with a bang.