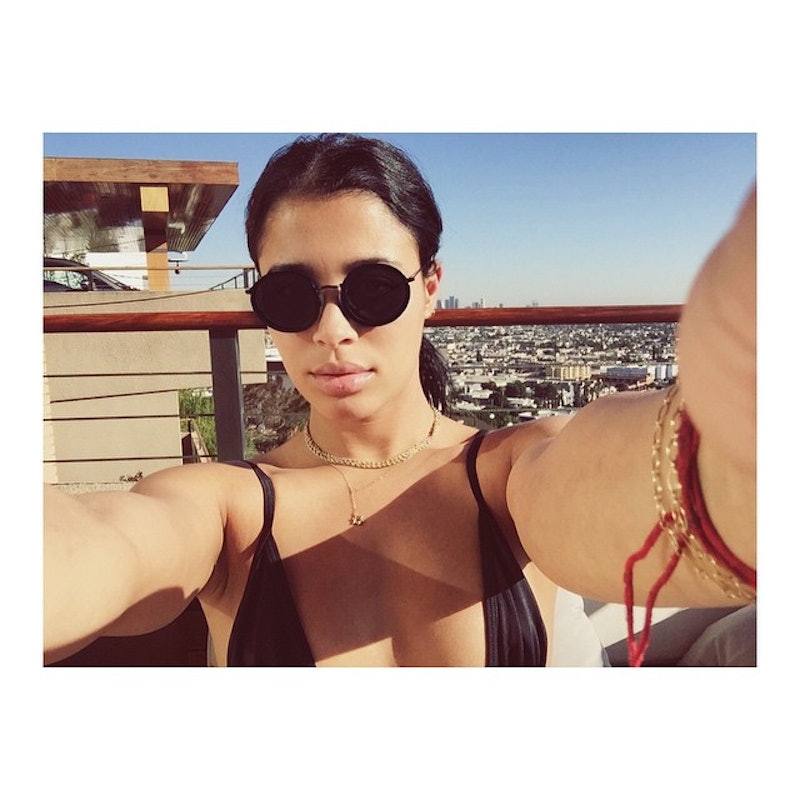 While Sami Miro may be know to some as Zac Efron's girlfriend, the start-up employee turned entrepreneurial model is much, much more. Miro spoke with Elle about her career change, love of fashion, and personal style. While Miro may not be a household name yet, she's definitely got the potential to be one of fashion's next big 'it' girls.

In the magazine, Miro discusses how she began her career at an start-up company but made the decision to pursue her true love of fashion. Moves like these are daring, and even if she hadn't been nearly as successful as she has been, Miro's decision to follow her dreams makes her incredible. Speaking of the career move, she states:

"My life right now is almost opposite of what it was just six months ago...I guess I'm just going for it. So I've been modeling recently and one of my passions, which I didn't realize could be an actual career, is vintage curation. It was something that I had just been doing my entire life. But after moving to Los Angeles and making friends [who worked] in fashion and entertainment I realized, 'Oh, wait. This could be an actual job.'"

Miro also discusses—for the first time— her experiences with Zac Efron, arguably one of Hollywood's hottest men. While the latest addition to the fashion world isn't quite used to fame yet, her experiences while dating Zac have helped her empathize with those who are inundated with internet obsessions and paparazzi stalkers. Miro tells Elle:

"I think that you have to take that [kind of attention] with a grain of salt, and put yourself in other people's positions. I think that's actually a really big part of it, putting yourself in their shoes, and trying to understand where they're coming from, and then it kinds of makes sense. It kind of just comes with the territory, and I know there's no really changing that, so you have to just embrace it...I'm not trying to hide anything in my life. If I was dating someone who wasn't in the limelight, I might have more photos on [Instagram] of our relationship, but I do think it's important. I mean, it's what is going on in my life, and I think that my social media can still represent that."

The model and business woman's accomplishments are just beginning, and while I hope they don't become overshadowed by who she's dating, I've got to say that I'm pretty jealous of how she and Zac's styles have started to merge. She even admits to wearing his clothes—jealousy abounds! Miro tells Elle:

"So I think with Zac—we shop together all the time, and I just naturally like to pick out clothes—our styles have mixed together. I definitely do borrow some cool shirts and jackets of his, too, so it works out really well. We kind of coordinate in a way. I think when you...hang out...you start to appreciate what the other person has to offer and clothing, because we're both really into it, comes out in that way also."

Sami Miro is definitely a woman with an exciting future ahead of her. With a unique sense of style and the cajones to jump ship on an established career, Miro's a woman that I feel confident is going places.

Just in case you aren't sure who Sami Miro is, let's run down some things you should know about the beauty.

1. She's One Of The Hottest Up And Coming Models

2. She's A Smarty With A Degree From Santa Clara University and A Masters from University of San Francisco

4. According to her LinkedIn account (which has not been confirmed as officially belonging to her), she's got quite the impressive resume!

For now, she may be known as the girl who Zac Efron's dating, but that won't be for long, especially with Miro's smarts and talent. Go get 'em, girl!